Air India Express flight carrying 191 people skids off the runway in the southern city of Calicut.

A Boeing 737 attempting to land at India’s Calicut International Airport on Friday skidded off the runway and crashed, leaving at least 18 dead and more than 100 injured.

There were 190 people aboard the flight, including 174 adult passengers and 10 infants, according to The Associated Press. Within hours of the crash, officials said there were 17 fatalities and more than 120 injuries.

Photos quickly emerged on social media showing the plane, which appeared to break into two pieces before coming to rest. Rain was being reported at the airport around the time that the accident occurred.

The incident happened around 7 p.m. local time on Friday as the plane was touching down after departing from Dubai earlier in the day, the BBC said. Calicut International Airport is located in the southwestern part of India not far from the Arabian Sea and about 41 miles north of Kerala. 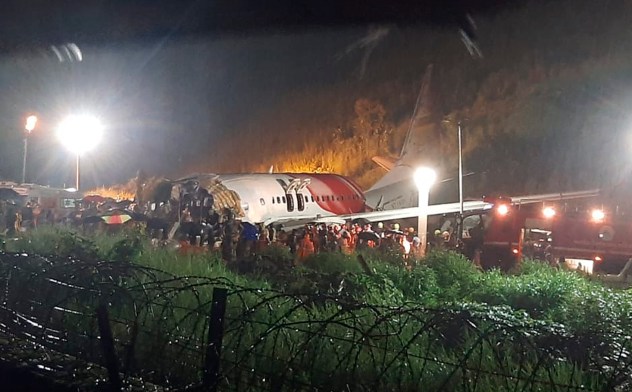 The Air India Express flight that skidded off a runway while landing at the airport in Kozhikode, Kerala state, India, Friday, Aug. 7, 2020. (AP Photo)

"According to observations from the Calicut (Kozhikode) International Airport, periods of light rain and fog began to develop in the area starting at around 1:30 p.m., local time," AccuWeather Meteorologist Maura Kelly said.

It is unclear at this time if the weather was a factor in the crash.

"Periods of rain and thunderstorms, becoming heavy at times, are forecast to continue through Sunday," Kelly said. This could interfere with cleanup efforts.