Dozens were killed and thousands were evacuated in India as torrential rain triggered devastating flash flooding and mudslides.

Watch the moment a house is swept away by a flooded river in Kerala, India. Heavy torrential rains in the region have caused flooding and landslides, killing more than 2 dozen people.

The death toll in the Indian state of Kerala rose Monday following a days-long deluge that resulted in severe flash flooding and landslides, and AccuWeather forecasters warn that more rain is on the way.

As of Tuesday, flooding rainfall and landslides have claimed the lives of at least 28 people in Kerala, according to The Associated Press. More than 9,000 people have been evacuated and are being housed across more than 200 relief camps set up in the state, according to the AP.

Kerala, a state located along India's southwestern coast, is no stranger to rain, but a developing storm unleashed more rain than the region could handle.

"The recent heavy rains across Kerala come from an area of low pressure that developed over the Arabian Sea, then backed eastward into southwestern India," AccuWeather Senior Meteorologist and Lead International Forecaster Jason Nicholls explained.

Nicholls added it is not uncommon for areas of low pressure to develop and push into southwestern India in this manner. However, this storm was able to stall just off the coast and unload round after round of heavy rain this weekend.

During the weekend and into Monday, widespread rainfall amounts of 4-8 inches (100-200 mm) impacted the state. The greatest rainfall totals largely were reported along the coast, as Kerala's capital city of Thiruvananthapuram recorded 9.60 inches (244 mm) of rain from Friday to Monday.

Thiruvananthapuram typically records just over 4 inches (100 mm) of rain for the entire month of October. The city received more than double its monthly rainfall over the course of just one weekend.

The city of Kottayam and the Idukki district experienced some of the worst impacts from the rainfall as swollen rivers raged and landslides swallowed homes. A majority of the deaths linked to this event came as a result of destructive landslides. 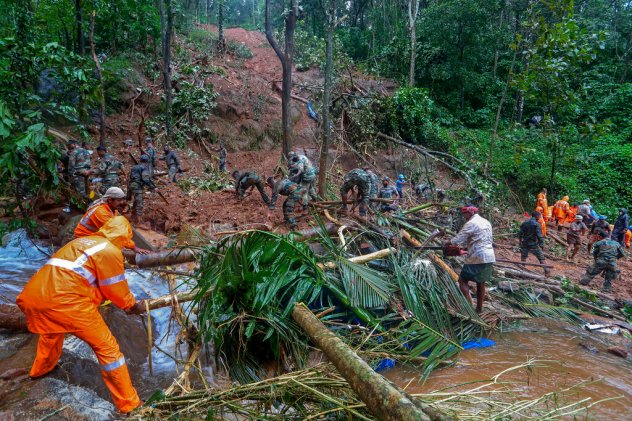 One landslide in Kottayam swept away several homes, including one home inhabited by a family of six. All six family members were confirmed dead, according to the BBC. Swollen rivers have also risen high enough to destroy several bridges that connect small villages across the affected region, leaving some people trapped.

Heavy rainfall has also put pressure on several dams in the state. Several shutters of the Idukki dam were opened Tuesday morning to prevent the dam from overflowing. According to The Indian Express, residents were given advanced notice of the dam release and processes were put in place to shift vulnerable residents to safer locations.

Rescues continued on Tuesday as floodwaters has not yet begun to recede in many areas. A dramatic video captured the moment when several good samaritans were swept away as they tried to help a person cross a torrent of fast-flowing floodwater.

AccuWeather forecasters say the forecast is not looking good for ongoing rescue and clean-up efforts.

"Rainfall should become more widespread with the risk of downpours on Wednesday," Nicholls said. "There could be another period of wet weather and a renewed risk of flooding and mudslides from Thursday into the weekend," he added.

'Gates of Hell' crater has burned in remote desert for 50 years
Explorers become 1st ever to reach bottom of mysterious 'Well of Hell'
Imagine living in this place ... during winter