Heavy rainfall and flooding swallowed the streets of Hagen, Germany, on July 13. It created a wild scene where water raced down the streets like a rapid river.

Some of the worst flooding has occurred in Germany, where at least 42 people have been killed, AFP reported. Rising floodwaters from raging rivers reportedly caused several houses to collapse, AFP reported.

"We have never seen such a catastrophe, it is truly devastating," Malu Dreyer, the premiere of the southwestern German state of Rhineland-Palatinate told lawmakers, according to AFP.

A disaster alert was issued in Germany's Hof County, located near the Czech border, as the heavy rainfall flooded basements, uprooted trees and cut power across the area. Rainfall totals of 3.34 inches (85 mm) over 12 hours were reported. This area also received around 3.50 inches (89 mm) on July 9.

The flooding was not limited to eastern Germany with several areas in western Germany reporting flooding after another round of rain and thunderstorms on Tuesday.

In Hagen, firefighters were called to rescue several drivers that became stranded as floodwaters rose in low-lying areas, the AP reported.

Videos on social media showed water rushing through the streets, while photos revealed floodwaters reaching as high as the hoods of cars in some areas early Wednesday.

In the nearby town of Erkrath, residents were warned to not shower or use washing machines after the rain overloaded the sewage system, the AP stated.

Flooding was also reported in the A44 tunnel that runs through Dusseldorf just south of the airport with a report of 1.89 inches (48 mm) of rain reported in the area in about 12 hours.

Several rivers and streams were bursting their banks in the Netherlands and Belgium due to heavy rainfall. Residents across the region were warned to stay away from these bodies of water.

Dutch media showed people being rescued from a historic mill that was partially submerged in floodwaters estimated to be about 5 feet (1.5 m) deep, The Associated Press reported.

With rounds of rain and thunderstorms in recent days, some cities across western and central Europe are already reporting higher-than-normal rainfall for the month of July.

AccuWeather Meteorologist Alyssa Smithmyer warned that many of these areas can receive more heavy rainfall through Friday as a slow-moving storm system spins over western Europe.

"An enduring low pressure system has set up across northern Europe and is continuing to bring rounds of wet weather to regions across France, Belgium, Netherlands, Germany, Switzerland and Italy," she stated.

"This feature has been around since early week, wreaking havoc on locations such as London on Monday with slow-moving storms bringing the region’s single-day heaviest rainfall since 1983," Smithmyer said. Storms flooded streets and submerged cars around the city, she added. 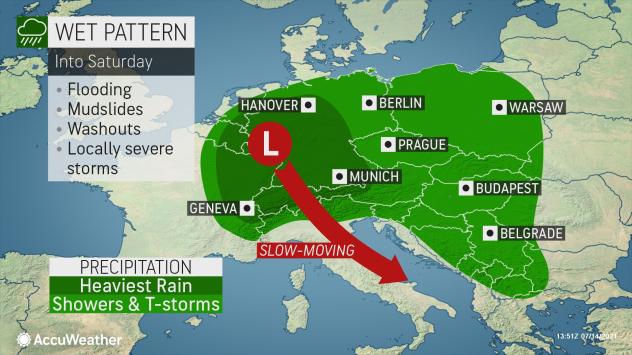 According to Smithmyer, the heaviest rainfall will track into southern Belgium, eastern Netherlands and northwestern Germany as the week progresses. Widespread rainfall totals of up to 4 inches (100 mm) are expected through the end of the week, with an AccuWeather Local StormMax™ of 8 inches (200 mm).

This amount of rain in addition to the recent heavy rainfall can create new areas of flooding, exacerbate existing flooding, trigger mudslides in rugged terrain, wash out roads and cause travel disruptions.

"Rivers and lakes across eastern France and western Germany are forecast to be at or nearing flood level by Friday, so residents are advised to be vigilant and weather-aware," warned Smithmyer.