Groups of neighbors and volunteers have descended on Texas communities to help families and local businesses impacted by the tornado outbreak.

AccuWeather forecasters say the atmosphere over the southern United States is set to become primed for explosive weather in the days ahead. Residents in portions of the South still reeling from last week's bout of destructive weather may find themselves in the path of Mother Nature's wrath once again this week.

The storm that is ultimately forecast to touch off potentially destructive weather across portions of the Central and Eastern states will first bring much-needed rain to the Southwest at the start of the week. The energy from this storm is set to push eastward and ultimately eject out of the Rockies on Tuesday.

Once this storm reaches the Plains, potent weather will be off to the races. Moist air from the Gulf of Mexico will be pulled northward and meet a zone of unseasonably warm conditions in places across many of the South Central states. High temperatures will soar 10-20 degrees Fahrenheit above normal through Tuesday across a majority of the southern Plains.

The combination of this moisture and heat, along with strong winds developing in the upper levels of the atmosphere, are exactly the ingredients necessary to set the stage for a potential outbreak of severe weather.

Tuesday evening through Tuesday night, the threat for severe weather will center over a swath of the central United States from central Texas, north to far southeastern Nebraska and east into portions of Missouri and Arkansas. 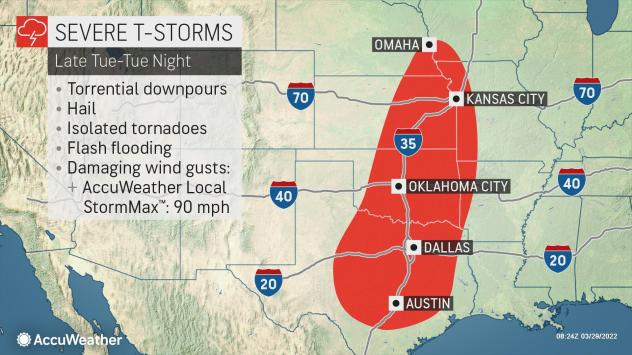 While hail and damaging wind gusts with an AccuWeather Local StormMax™ of 80 mph will be the main threats with any feisty storm into Tuesday night, a few tornadoes cannot be ruled out. Portions of central and northern Texas, as well as Oklahoma and Kansas, can be in the bull's-eye of the isolated tornado risk.

In addition, torrential downpours are possible with the bulk of the thunderstorms. This heavy rainfall may trigger flash flooding, especially for low-lying and urban areas.

With the majority of severe activity set to commence late Tuesday and continue into the overnight hours, AccuWeather forecasters urge residents in risk areas to have a plan in place if a severe thunderstorm strikes at night.

"Residents in places like Dallas and Oklahoma City may want to place a pair of shoes next to the bed and have a flashlight handy on Tuesday night," Buckingham advised. "But most importantly, be sure any electronic devices are fully charged, powered on with the volume up and are able to receive critical weather warnings."

Travelers who must be out in the elements on Tuesday night will need to keep an eye out for rapidly changing conditions. In the dark of night, dangerous storms or flooded roadways can be difficult or even nearly impossible to spot.

On Wednesday the threat area for severe weather will shift eastward and push into the Mississippi Valley.

"The atmospheric setup from Wednesday into Wednesday night can target the same areas that were hit hard back on March 22," Buckingham warned. "Residents across Louisiana and Mississippi will once again need to be prepared for dangerous thunderstorms."

In addition to Louisiana and Mississippi, large portions of Arkansas, Missouri, Illinois, Kentucky, Tennessee, and Alabama will be at risk for severe weather Wednesday.

Strong-to-severe storms can arrive as early as Wednesday afternoon for cities like New Orleans, where a suburb took a direct hit from an EF3 tornado last week. Similar storm timing is expected for cities like Nashville, while locations like Memphis, Tennessee, can encounter potentially damaging storms by Wednesday morning. 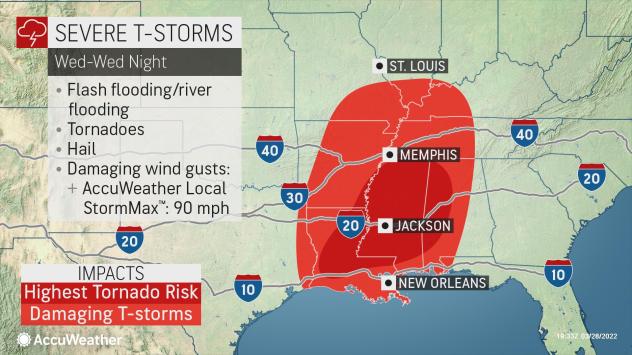 "Unlike the severe weather event last week, this setup is expected to yield a higher threat for severe thunderstorms farther north up the Mississippi River Valley and into the western reaches of the Ohio River Valley," Buckingham explained.

Just like on Tuesday, all severe weather hazards are possible during Wednesday's storms. This includes hail, damaging wind gusts with an AccuWeather Local StormMax™ of 85 mph, torrential downpours and even tornadoes.

By Wednesday night, the threat for powerful storms is forecast to stretch into central Tennessee, central Alabama, and even a portion of the Florida Panhandle.

"It is likely that the severe thunderstorms move eastward at a swift pace Wednesday night and could be racing along at 50 mph or more," AccuWeather Meteorologist Ryan Adamson said. "This fast motion may not allow people in the path of the storms much time to react and take shelter."

It remains critical that anyone in the potential path of severe weather has a way to receive time sensitive and potentially life-saving warnings, AccuWeather forecasters urge.

By Thursday, the threat for severe weather will begin to ease, but will not dissipate entirely. 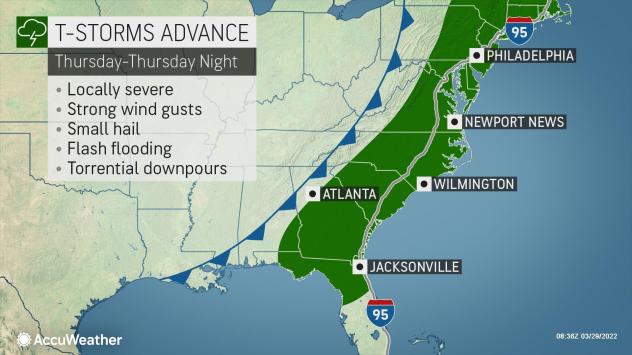 As the storm and its associated cold front continue to push eastward on Thursday, thunderstorms, many of which can be heavy and gusty and some of which can be severe, will stretch across part of the Eastern Seaboard. The strongest storms may focus on the mid-Atlantic region and may pack damaging wind gusts.

By the end of the week, the storm is forecast to finally push off the East coast and move out over the Atlantic Ocean, effectively ending the opportunity for additional potent weather.