AccuWeather Global Weather Center, July 24, 2020 – AccuWeather today announced its latest innovation to optimize users’ safety and awareness of hurricanes with the new AccuWeather Local Hurricane Tracker™ available on accuweather.com. This online tool is the first of its kind to offer an all-in-one experience that shows a developing storm’s progression over the ocean, while providing real-time updates of forecast wind speeds, rainfall amounts and affected areas.  This extension of the existing AccuWeather Hurricane Center brings data points and features on a local level for users to visualize with unique precision coverage of any major tropical storm or hurricane that forms in the oceans around North America, displaying a track where an impact in their specified area might occur.

The launch of the exclusive new tracker comes amid an unusually active hurricane season and during a week that has already seen three named storms develop in the Atlantic and the Pacific Oceans. Hurricane Douglas formed in the eastern Pacific Ocean, strengthening to a Category 3 on July 23, while at the same time on the Atlantic side, Tropical Storm Gonzalo became the earliest ever “G” named storm since the satellite era of the 1960s, beating out Tropical Storm Gert, which formed on July 24 amid the intense 2005 hurricane season. On July 24, Tropical Storm Hanna developed in the Gulf of Mexico and is on a path toward Texas.

The Local Hurricane Tracker is a holistic experience designed to provide users with a real-time understanding of all the factors related to hurricanes and tropical storms as they approach landfall. This includes providing the most accurate and up-to-date information about rain, wind speeds, and live impact-map tracking for the storm’s path displaying coverage over the ocean and the most affected, at-risk areas. In addition to these features, users will have access to real-time storm updates and a live blog for deep insights as to what is happening on the ground and in the sky. In addition, exclusive new satellite-based radar maps displaying the progression of tropical storms as they develop over water are also available to users on the AccuWeather app as well as accuweather.com.

When users search for, or have saved, a location affected by a tropical storm or hurricane, the tracker will display in a special tab identified by the named storm, “Local Douglas Tracker,” for example in the case of Tropical Storm Douglas now impacting the Hawaiian Islands. When this tab is selected, the Local Hurricane Tracker will appear with comprehensive critical details related to the area. 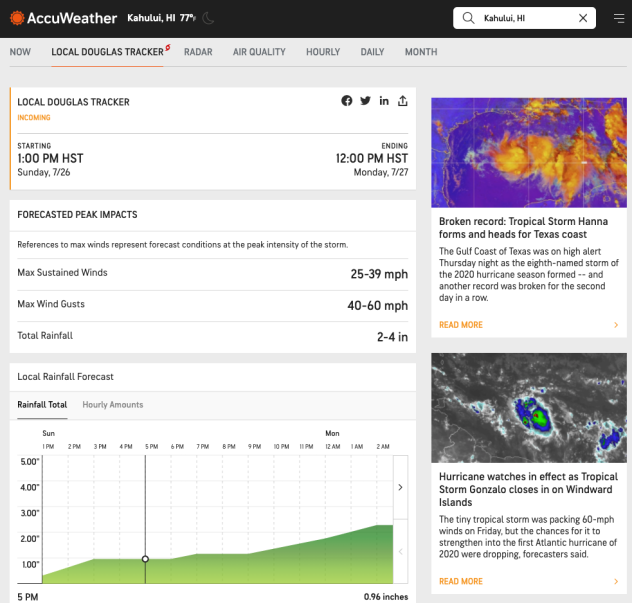 Complementing the proven Superior Accuracy for which AccuWeather forecasts are known and trusted, the Local Hurricane Tracker gives users the option of zeroing in on a storm’s path by searching for a particular city name or zip code, highlighting its hyperlocal capability.

“With an already unusually active hurricane season in 2020, AccuWeather’s exclusive Local Hurricane Tracker is an innovative, powerful tool for anyone seeking up to-the-minute insights about storms as they approach or have made landfall for greater awareness, safety and better decision making not available from any other source in this easily accessible detailed format,” said AccuWeather’s lead tropical meteorologist Dan Kottlowski. “Keeping our users informed as storms develop is central to AccuWeather’s DNA and mission to keep people prepared, save lives and protect property. This is another helpful tool to empower and protect people and their families and businesses with critical, timely information.”

AccuWeather increased its forecast for a ‘very active’ season earlier this summer to around 20 tropical storms, including 7-11 hurricanes, 4-6 major hurricanes and an additional 2-4 direct impacts on the United States, bringing the total number of impacts between 6-8.

Said AccuWeather Chief Product Officer Kurt Fulepp, “We continuously design and develop products that keep our global users safe and prepared under the threatening weather conditions. The AccuWeather Local Hurricane Tracker is another demonstration of our commitment to providing the most accurate information for the public well-being.”

In January 2019, AccuWeather announced the launch of the proprietary RealImpact™ Scale for Hurricanes; an innovative new 6-point scale that considers various factors designed to evaluate the threat posed by a hurricane or tropical storm. Differing from the Saffir-Simpson Scale which only measures wind speed, the AccuWeather RealImpact Scale for Hurricanes considers threats such as coastal storm surge and flooding, rainfall which on average are the primary cause of death and destruction during these severe storms. Ratings range between 1-5, from least severe to most severe, but also includes a measurement of “Less than 1” if a storm system does not rise to the level of a Category 1 on the Saffir-Simpson Scale.

AccuWeather’s Local Hurricane Tracker can also be found in a user-friendly mobile web-version.

About AccuWeather, Inc. and accuweather.com — AccuWeather, recognized and documented as the most accurate source of weather forecasts and warnings in the world, has saved tens of thousands of lives, prevented hundreds of thousands of injuries and tens of billions of dollars in property damage. With global headquarters in State College, PA and other offices around the world, AccuWeather serves more than 1.5 billion people daily to help them plan their lives and get more out of their day through digital media properties, such as accuweather.com and mobile, as well as radio, television, newspapers, and the 24/7 AccuWeather Network channel. Additionally, AccuWeather produces and distributes news, weather content, and video for more than 180,000 third-party websites. Among AccuWeather’s many innovative and award-winning features available free to the public are MinuteCast® Minute by Minute™ forecasts with Superior Accuracy™. Furthermore, AccuWeather serves more than half of Fortune 500 companies and thousands of businesses globally. Dr. Joel N. Myers, Founder and Chief Executive Officer, established AccuWeather in 1962 and is considered the “father of modern commercial meteorology.” Dr. Myers, a leading creative thinker and visionary, has been named “the most accurate man in weather” by The New York Times and one of the top entrepreneurs in American history by Entrepreneur’s Encyclopedia of Entrepreneurs.