Founder and CEO Dr. Joel Myers: ‘I wanted to raise the respect for weather forecasters and meteorologists overall … Today, when we forecast a snowstorm or a hurricane, people act on it and do what is necessary to get ready.’

AccuWeather Global Weather Center, September 23, 2022 — Since its founding in 1962, AccuWeather, the most accurate and most used source of weather forecasts and warnings, has revolutionized the field of meteorology.  Now celebrating 60 years, AccuWeather’s extraordinary record of forecast accuracy has been responsible for saving tens of thousands of lives in the United States and around the world. 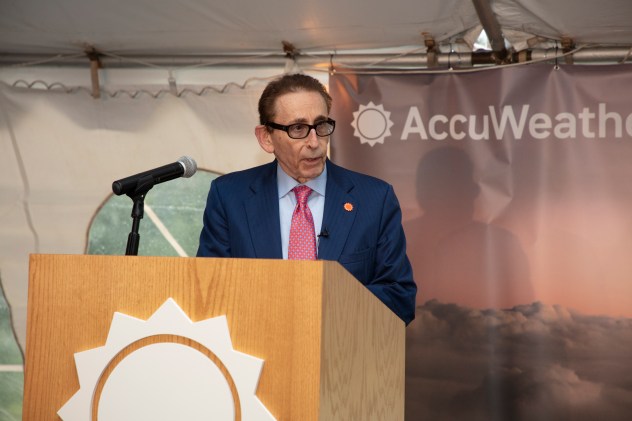 The company held an anniversary celebration at its Global Weather Center headquarters in State College, Pennsylvania Thursday, September 22nd, which featured the participation of elected officials and leaders of the meteorological community as well as AccuWeather staff, clients and other distinguished guests. At the event, words of praise for AccuWeather’s life-saving work came from National Weather Service Director Ken Graham, World Meteorological Organization Secretary-General Petteri Taalas, and Pennsylvania Governor Tom Wolf, among many others. 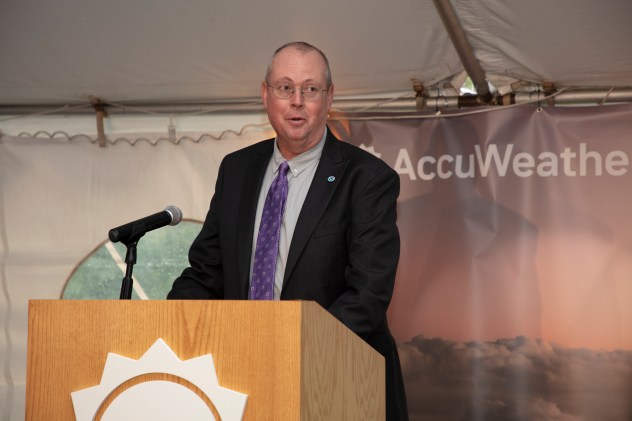 Also speaking at the event was Dr. Neeli Bandapudi the newly installed president of Pennsylvania State University, where AccuWeather Founder and CEO Dr. Joel Myers earned three degrees in meteorology and established AccuWeather while a second-year graduate student. Dr. Myers taught meteorology at Penn State for nearly two decades; it is estimated that he had trained 17 percent of the nation’s weather forecasters by the time he retired from teaching. 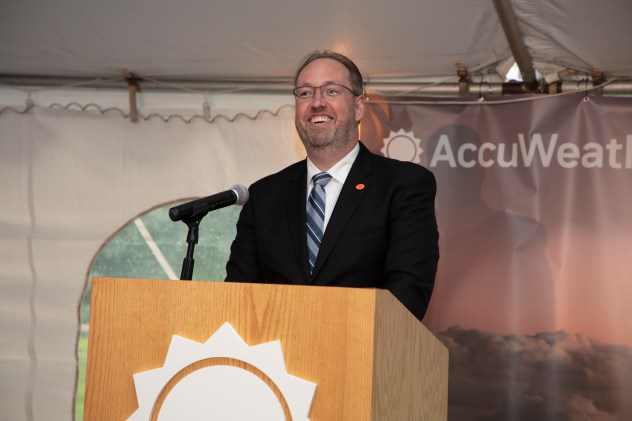 What began as the dream of one man flourished into a remarkable legacy that has been built on AccuWeather’s proven Superior Accuracy™, which Myers says is achieved by a combination of technology, patented processes and by the drive and dedication of the most talented weather forecasters, product developers and computer specialists in the world, working together in a “crucible of excellence.” 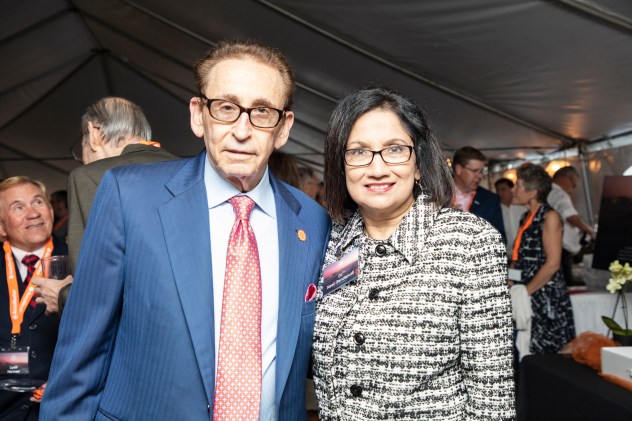 “I had a burning desire to be a weather forecaster, and I wanted to combine this dream with my burgeoning entrepreneurial spirit,” said Myers. “As a teenager, I wanted to raise the respect for weather forecasters and meteorologists overall.  In those days, forecasts were the butt of jokes and cartoons, ‘It is the only job you can get paid for to be regularly wrong.’  Today, when we forecast a snowstorm or a hurricane, people act on it and do what is necessary to get ready.” 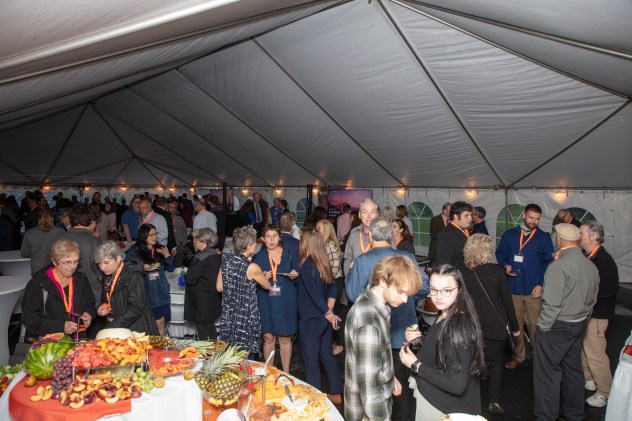 Clearly, Myers, the exceptional AccuWeather team and the entire Weather Enterprise are accomplishing that mission.  In his book, The Signal and the Noise, noted statistician Nate Silver examined forecasts across a wide variety of disciplines and discovered that most made virtually no progress in accuracy over the decades. The lone exception, he found, was the science of weather forecasting.

Study after study of forecast accuracy has confirmed the statistical superiority of AccuWeather forecasts over all other sources.

Said Myers, “Statistically, AccuWeather has no peers, but the value of AccuWeather forecasts goes far beyond their statistical superiority.”

According to Myers, it is achieved through AccuWeather’s finely tuned art and science of prediction, which includes using the best wording, focusing on the weather’s impact, and the psychology of how the forecast will be interpreted, so people will clearly understand and take the right actions.

“It is through how we word the forecast, and how we explain the weather’s impact to people and to companies, so they make better decisions, get more from their day, are ‘in the know’ and keep their families safer,” said Myers. “Our users have more trust in AccuWeather forecasts than any other source.”

Since 1962, AccuWeather has kept millions of people safe when severe weather has threatened, reduced bodily injury and helped people, businesses and communities reduce bad weather losses, including preventing hundreds of billions of dollars in property damage.

Continually refining and improving the science and art of prediction and weather forecasting over the past 60 years, Myers and AccuWeather have invented thousands of innovations along the way. AccuWeather MinuteCast®, the patented AccuWeather RealFeel® Temperature and the AccuWeather RealImpact™ Scale for Hurricanes are simply a few tools the company has introduced for greater safety, convenience and comfort.  Earlier this year, AccuWeather released groundbreaking AccuWeather Alerts™ advanced notifications to provide better, clearer and more concise notifications when severe weather threatens to complement official government warnings.

“In our 60 years, AccuWeather has certainly become a global brand and trusted source for accurate, actionable and, when needed, life-saving information,” said Steven R. Smith, AccuWeather President, who began as a forecasting intern in 1997. “With extreme weather events increasingly impacting more humans around the world, there is a growing need for increased advanced notice and accuracy. No other weather source is better than AccuWeather at weather forecasting due to our unique forecasting philosophy that has been honed and refined for six decades.”

AccuWeather’s successes have been documented and reported throughout the world and are evidenced by its many long-lasting client and media partnerships, including a recently celebrated 50-year relationship with Channel 6abc Action News in Philadelphia. In addition, the American Meteorological Society has bestowed far more awards on AccuWeather than any other commercial weather company.  Even Congress has cited AccuWeather for its accurate and life-saving warnings.

Said Myers, “Companies pay us hundreds of thousands of dollars a year – some even pay us millions -- because what we provide is unique and superior and people and business leaders understand that if they are not using the AccuWeather forecast, they may not be getting it right.”

The benefits of accurate weather forecasts to society, the global economy, and people’s lives are enormous and Smith feels the goal of a “perfect forecast” is still out there.

Said Smith, “From a national security perspective, destructive severe weather causes deaths and costs trillions of dollars each year.  We feel the solution toward achieving a 100 percent accurate, X number of days out forecast must come from a multinational company, a company without borders because the weather has no borders. This drives me personally, and it is clear that our work is not done here, and there is so much more we can and will do.”

AccuWeather, recognized and documented as the most accurate source of weather forecasts and warnings in the world, has saved tens of thousands of lives, prevented hundreds of thousands of injuries, and saved tens of billions of dollars in property damage. AccuWeather’s talented staff achieves this noble purpose and mission through a culture of ICE – Innovation, Creativity, and Entrepreneurship.

AccuWeather forecasts appear on digital signage, in 700 newspapers, heard on over 800 radio stations, and on 100 television stations.

The AccuWeather Network reaches 35 million households, and its AccuWeather NOW streaming service is available to more than 200 million active users on many platforms, including Roku, Xumo, Red Box, LG, Amazon, and Freevee.

AccuWeather For Business serves more than half of the Fortune 500 companies and thousands of other businesses and government agencies globally who pay for the most accurate weather forecasts from any source.

AccuWeather's story is one of a fanatical dedication to Superior Accuracy ™, detail, creativity, innovation, entrepreneurship, and the loyalty and commitment of many people who have joined AccuWeather’s center of excellence, including many others who have dedicated their entire careers to AccuWeather.

Dr. Joel N. Myers, Founder and Chief Executive Officer, established AccuWeather in 1962 and is considered the “father of modern commercial meteorology.” Myers, a leading creative thinker and visionary, has been named “the most accurate man in weather” by The New York Times and one of the top entrepreneurs in American history by Entrepreneur’s Encyclopedia of Entrepreneurs.