A northeastward turn will steer the major hurricane away from the Leeward Islands, but impacts could still be felt as Sam moves by.

AccuWeather forecasters say confidence is growing that the United States will miss out on a direct hit from Hurricane Sam, but the monster storm will still be able to make some waves.

Sam had weakened to a Category 3 hurricane on the Saffir-Simpson Hurricane Wind Scale with maximum sustained winds of 125 mph by 11 a.m. EDT Monday, but it remained a major hurricane, which is any storm classified as a Category 3 hurricane or greater. Sam strengthened once again Monday night. As of 11 a.m. EDT Tuesday, Sam had maximum sustained winds of 130 mph, which is Category 4 intensity.

AccuWeather forecasters said it appeared as though Sam has gone through a change in its core structure during Sunday night into Monday, called an eye wall replacement cycle. That change allowed top winds in the eye wall to drop. That change was only temporary, however, and some additional strengthening may occur on Tuesday.

On Sunday, Sam's maximum sustained winds were less than 10 mph shy of becoming the 2021 Atlantic hurricane season's first Category 5 hurricane. Its wind speeds had already matched those of Hurricane Ida's, which also topped out at 150 mph before the storm barreled into Louisiana in August. 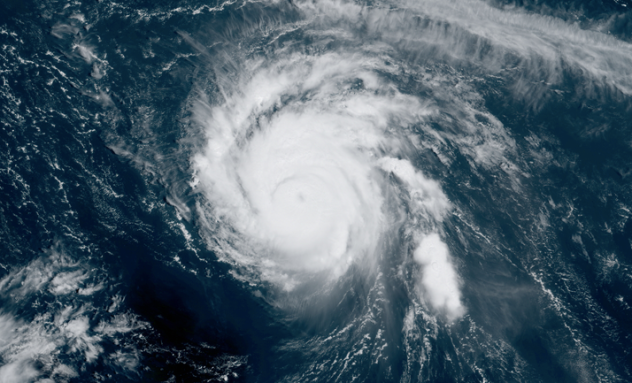 This image, captured at midday on Monday, Sept. 27, 2021, shows the eye of Sam beginning to re-appear after slight weakening that lasted into the morning hours. Sam may be about the strengthen once again after slipping to Category 3 hurricane intensity with 125-mph winds. (CIRA at Colorado State/GOES-East)

AccuWeather forecasters say Sam's journey to attain its strength was impressive, to say the least. Sam was the fifth storm this season to undergo rapid intensification, following in the footsteps of Elsa, Grace, Ida and Larry.

Meteorologists define rapid intensification as an increase in a storm’s maximum sustained winds of 35 mph or more within 24 hours, and Sam surpassed that benchmark. Sam first earned its name on Thursday morning when it became the 18th named storm of the season. Less than 24 hours later, Sam had strengthened further into a hurricane, the seventh of the season.

While Sam is a monster of a hurricane, it will remain in the best place possible for a dangerous storm at the start of the week -- largely out over the open ocean, away from any landmasses. However, as the week continues, the impressive storm may take a swipe at parts of the Caribbean.

Sam began to adopt more of a northward component to its motion this weekend and the hurricane will continue to gradually turn more to the north as the week progresses. Precisely how quickly Sam makes its northward turn will be critical in determining exactly how much impact the strengthening cyclone will have on the Caribbean's Leeward Islands.

The sooner Sam begins to track to the north, the more likely the hurricane's dangerous eyewall, with its destructive winds, will avoid the islands into midweek. AccuWeather forecasters say an earlier turn to the north is the most likely scenario at this time, likely preventing a direct strike on the Leeward Islands. 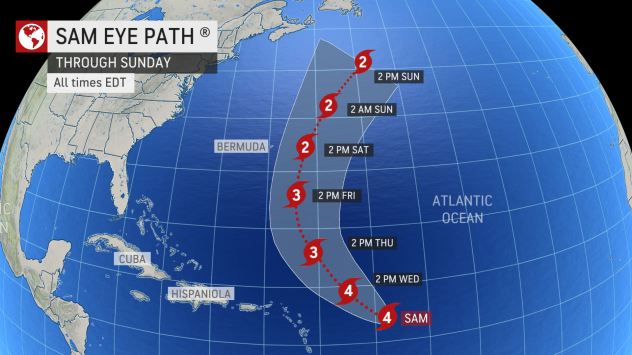 Even without a direct strike, parts of the Caribbean can still feel some impacts from Sam.

"Even though Sam is forecast to pass to the north and northeast of the northern Leeward Islands, rough surf, high waves and rip currents will impact the shores of the islands over the next several days," AccuWeather Senior Meteorologist Dan Pydynowski said.

The risk for rip currents will extend to shorelines well beyond the Leeward Islands as the powerful Sam continues to track generally north over the open Atlantic.

As Sam remains a formidable hurricane, it will continue to produce progressively larger swells that propagate outward from the center. These swells will generate building seas ahead of the storm and usher in large waves and rough surf, even for areas hundreds of miles away.

"Rough surf and rip currents are likely to reach much of the eastern coast of the U.S. later this week," Pydynowski cautioned. 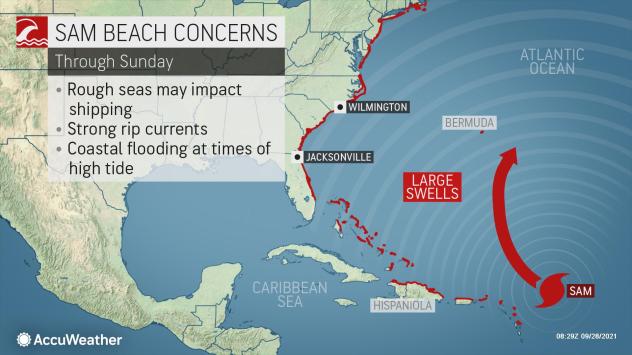 Almost the entirety of the Atlantic coast from central Florida to Maine will encounter building surf and increasing rip currents beginning as early as midweek.

About 100 deaths per year in the U.S. occur as a result of rip currents, according to the U.S. Lifesaving Association. So far this year, there have been at least 19 rip current deaths along the Atlantic coast, according to data from the National Weather Service.

"In the longer range, as Sam tracks nearly due north, the hurricane may threaten Bermuda later in the week or by the upcoming weekend," Pydynowski said. 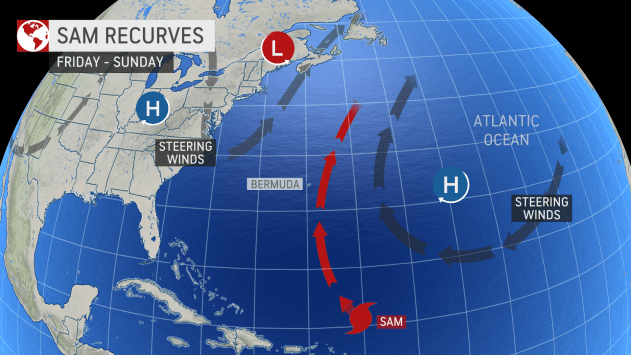 "A southward dip in the jet stream that is forecast to form over the northeastern U.S. this weekend has the potential to capture and pull Sam northwestward," AccuWeather Senior Meteorologist Alex Sosnowski said. While this is not likely to happen fast enough to pull Sam toward the U.S., there is a slight chance Sam could get tugged on enough to approach the island of Newfoundland later this weekend to early next week, he explained.

As Sam spins over the open Atlantic, it follows in the tradition of some powerful, even infamous, "S" storms. While Sam is not forecast to strike the U.S. directly, other S storms, less powerful than Sam, have had a major impact on U.S. soil.

One of the most destructive storms in recent memory to carry an "S" name was Superstorm Sandy, which plowed into New Jersey in October of 2012 with ultimately devastating consequences. Damages from Sandy in the U.S. ultimately amounted to $65 billion, according to a National Hurricane Center report.

The most recent "S" storm to actually strike the U.S. occurred during 2020's record-breaking hurricane season. Hurricane Sally strengthened into a Category 2 hurricane over the northern Gulf of Mexico and made landfall on the Alabama Panhandle on Sept. 16, 2020. 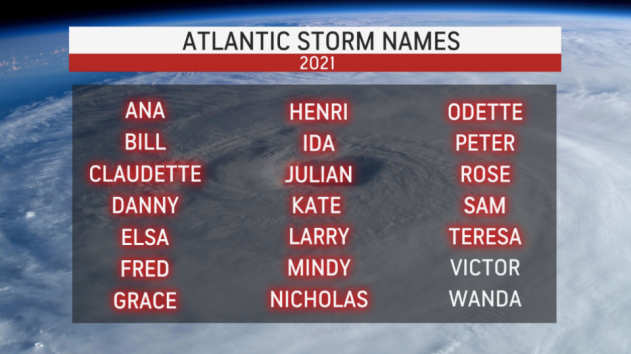 With the recent formations of Sam and short-lived Subtropical Storm Teresa, the prolific 2021 Atlantic hurricane season continues to outdo itself. Only two names remain on the predetermined list of tropical names for the 2021 season

Sam is the 18th named storm of the 2021 season, which is on pace for AccuWeather's forecast of 20-25 named storms prior to the end of the year. If the remaining designated names for 2021, Victor and Wanda, are exhausted, additional storms will be named using a supplemental list prepared by the World Meteorological Organization.

In addition to 20-25 total named systems predicted this year, AccuWeather is projecting up to 10 hurricanes and five to seven major hurricanes. Including Sam, there have been four major hurricanes thus far with maximum sustained winds of 111 mph or greater. There have been eight landfalls in the U.S., and there may yet be another direct impact or two on the U.S. before the end of this season. 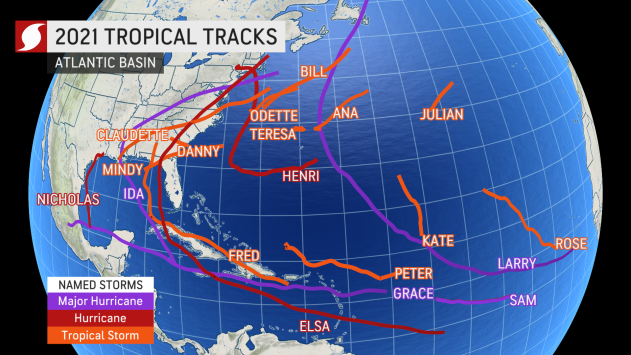