Isaias to threaten rough surf, flooding up and down the East Coast

After slamming the Bahamas and the Turks and Caicos, Isaias will come dangerously close to the U.S. Bernie Rayno has the latest forecast on the storm's track.

After bringing torrential rain and damaging winds to the Bahamas and part of the Florida east coast this weekend, Isaias is likely to have some impact on the northeastern United States this week following a potential landfall in the Carolinas on Monday.

Isaias made landfall in Andros Island of the Bahamas around midday Saturday, lashing the islands as it weakened slightly. The storm was packing 70-mph winds after downgrading to a tropical storm as it neared Florida Saturday afternoon.

The storm weakened despite traveling over bath-like waters between Florida and the Bahamas, though it is expected to regain hurricane strength as it continues its path. It is expected to crash ashore along the North Carolina coast on Monday evening, bringing dangerous surf, tropical-storm-force winds and flooding dangers. 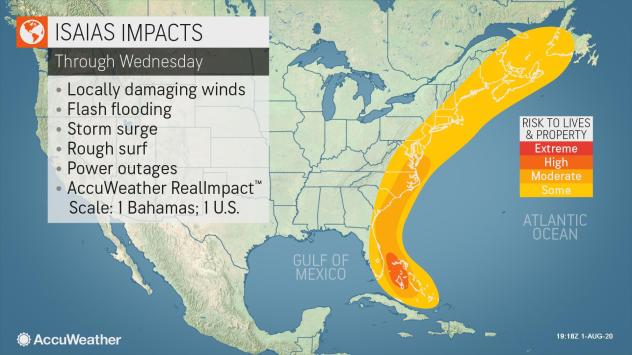 But, the storm's rampage won't stop there. AccuWeather meteorologists expect Isaias to emerge back over the Atlantic and track along or just offshore of the mid-Atlantic and New England coastline spanning Monday night to Wednesday. The exact track of the tropical system will determine the scope of the rain, intensity of the wind and the magnitude of the storm surge in the region.

Ahead of Isaias, rounds of wet weather will start to chip away at the drought conditions in the Northeast, thanks to a pattern change that will allow some Gulf of Mexico moisture to flow northward and Atlantic moisture to seep inland. Some of the driest areas so far this summer include portions of Maine down through New England into the Hudson Valley, as well as portions of central Pennsylvania and New York state.

Away from Isaias, several storms will follow the jet stream through the Northeast, allowing for waves of rain and thunderstorms from Saturday through early week.

Not every location from Virginia to Maine will get wet weather through this entire timeframe, but most locations are likely to get at least a round or two of rain. 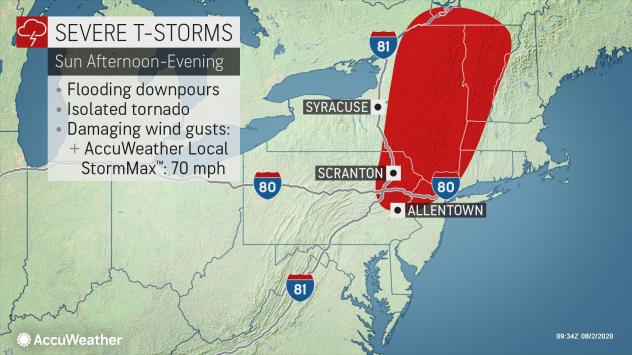 A front will move into the region on Monday, stalling late Monday into Tuesday near the Eastern Seaboard, putting it on a collision course with Isaias.

"Non-tropical systems, such as the one moving in from the Midwest, have drawn tropical storms and hurricanes close to and inland of the coast in the past, so there is still some risk of track along or just inland over the Northeast," according to AccuWeather Senior Meteorologist Alex Sosnowski. 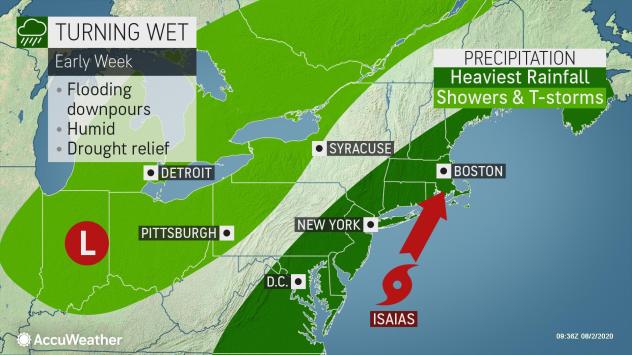 "Should this occur, heavy rain could be flung well inland of the coast and tropical storm to hurricane-force winds could occur along the coast from Virginia to Maine," Sosnowski added.

However, the speed of either the front or Isaias could greatly impact what the forecast looks like in the coming days. 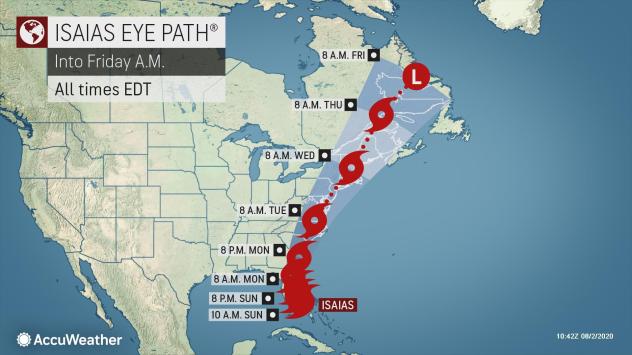 If Isaias were to speed up and reach the Northeast sooner, when steering winds are more southerly as opposed to westerly, it might bring enhanced rainfall farther inland. Should Isaias slow down or the front move a little faster, the greatest of Isaias's impacts could remain offshore.

"Some of the rich tropical moisture associated with this storm is forecast to be pulled northward and interact with the stalled front regardless, resulting in a more enhanced period of showers and thunderstorms," AccuWeather Senior Meteorologist Dave Dombek said. 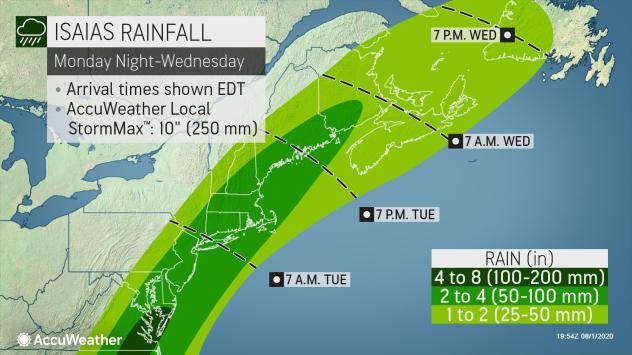 The enhanced thunderstorms will have a higher chance of producing drenching downpours that could result in localized flooding problems.

The combination of a pattern change and any additional moisture from Isaias could bust the drought in part of the region before the end of the first week of August.

While the rain could be a benefit for the region, too much rain might trigger dangerous flash flooding.

"Should too much rain fall in the same place in a short period of time, the dry ground will struggle to absorb all the water it desperately needs," said Dombek.

Low-lying and poor drainage areas will be the most susceptible to these flooding problems first.

"The heavy urban areas along the Interstate-95 corridor to the Atlantic coast, where there are a great deal of paved surfaces will stand the greatest chance of street and highway flooding in this situation," Sosnowski said.

"If we get a situation where there is a strong tropical storm or minimal hurricane that hugs the mid-Atlantic and New England coasts, storm surge flooding could be a player for a brief time," Sosnowski added.

The full moon is on Monday, and is a time of the month and roughly when astronomical tides are the highest. The arrival of Isaias will be a day or two later it appears and a worst-case scenario should be avoided. 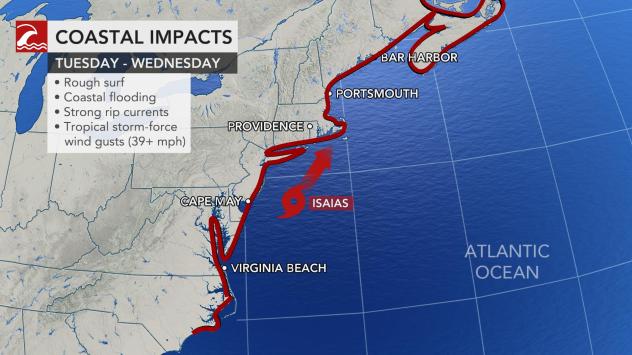 Tides of 1-2 feet above normal are possible in this case, but are likely to be higher, perhaps 3-6 feet above normal in southeastern Virginia, where Isaias may be close by during Monday evening and storm surge flooding could be more significant in the region.