The National Guard rescued 25 people from flooding in Puerto Rico, as Iasias dumped heavy rain on the island on July 30.

Isaias is garnering attention for its potential landfall on the United States coast this weekend, but it smacked another U.S. area first. On Thursday morning, Isaias, then a tropical storm, dumped flood-inducing rain and drove heavy winds into Puerto Rico, leaving hundreds of thousands without power before eventually making landfall in the Dominican Republic, where it was blamed for at least two fatalities.

According to Puerto Rico's Electric Power Authority, more than 300,000 customers woke up in the dark Thursday as electricity was knocked out across much of the island. Maximum sustained winds as strong as 60 mph were recorded as trees were toppled, roofs were damaged and frightening memories from Hurricane Maria were stirred up.

Adding to the Puerto Ricans' fears is that many of those roofs were never fully repaired after Maria, with blue tarps serving as an ominous reminder of what was devastated in the past and what continues to be threatened on Thursday.

In its 11 a.m. advisory, the National Weather Service office of Puerto Rico warned that the flood threats and strong winds presented a life-threatening situation for Puerto Ricans.

José Pagán told The Associated Press that he didn't expect the impacts to be as severe as they were, but he experienced some flooding in his home and a loss of power.

“I didn’t think it was going to be this strong,” he told the AP. “It’s a rather difficult experience because it reminds us of Maria.”

Photos and video circulated on social media throughout Thursday morning of roadways completely washed over and floodwaters reaching buildings.

In Trujillo Alto, about 15 miles southwest of the capital city of San Juan, three gates on the Carraízo reservoir dam were opened in order to relieve the excess runoff from the storm.

A total of 10.36 inches of rain was recorded in La Plaza, Caguas, while four other rain gauges recorded upwards of 9 inches. 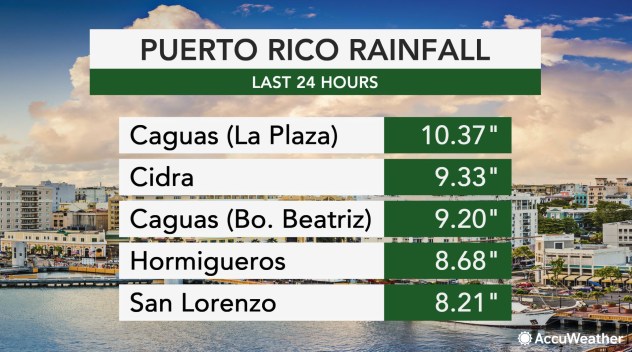 The heavy rain not only caused flash floods but also triggered small landslides. Footage of one such landslide was captured in Limon, Mayaguez, located on the western half of the territory.

In addition, rivers rose rapidly due to the excessive rainfall.

The Rio Grande De Manati near Ciales, Puerto Rico rose from 3 feet on Thursday morning to 12.77 feet by Thursday afternoon. The river level rapidly rose by as much as 1.02 feet per hour.

Elsewhere in Puerto Rico, the Rio Guanajibo River near the town of Hormigueros went from a level of 11 feet on Thursday morning to 23.5 feet by the afternoon. At one point, the river was rising by as much as 1.35 feet per hour.

"Isaias was moving over the island of Hispaniola with maximum sustained winds of 60 mph during Thursday midday and was racing northwestward at 20 mph," AccuWeather Senior Meteorologist Alex Sosnowski said. "The tropical storm was less than 50 miles away from Punta Cana, Dominican Republic."

The storm lashed the Dominican Republic with heavy rains and tropical-storm-force winds. Forecasters said it made landfall there on Thursday afternoon. At least two deaths were blamed on Isaias' impacts, according to Reuters. Civil Defense officials said Chiche Peguero, 53, was killed when powerful winds caused a high-voltage power line to fall in Río San Juan, a city in the María Trinidad Sánchez province. A 5-year-old boy was also killed after a tree crushed his home on Thursday evening, according to elCaribe, a local news organization.

By late Thursday evening, Isaias had become a hurricane with maximum sustained winds of 80 mph and was moving northwestward at 18 mph and away from Hispaniola, the island shared by the Dominican Republic and Haiti. The hurricane was about 70 miles east-southeast of Great Inagua Island which is located north of the northwestern tip of Haiti. 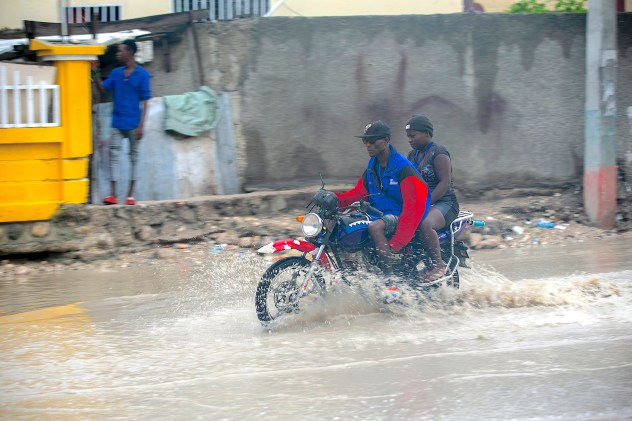 Early on Friday morning, the hurricane still had sustained winds of 80 mph, moving northwestward at 17 mph. However, as the day went on, Isaias' sustained winds weakened slightly before regaining its strength, though its sped slowed to 15 mph. As of early Saturday morning, the storm was about 115 miles south-southeast of Nassau, the capital city of the Bahamas. 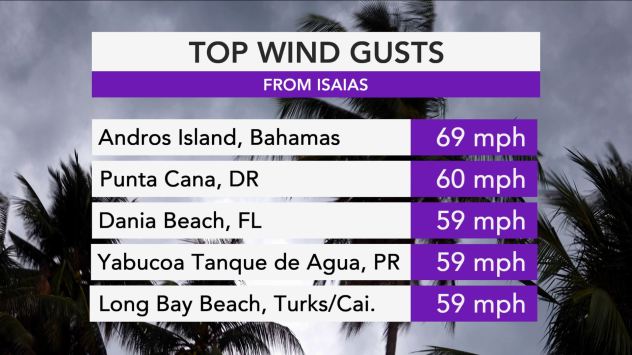 After Isaias made landfall around 11 a.m. EDT Saturday on the northern part of Andros Island in the Bahamas as a Category 1 hurricane, it weakened to a tropical storm late Saturday afternoon with sustained winds of 70 mph and a speed of 10 mph. However, the storm is forecast to turn northward, and come very close to the east coast of Florida on Saturday. Isiaias is also expected to strengthen back into a hurricane by Sunday morning.