At least six people were killed and more than 2 million were left without power in the United States Thursday as Zeta carved a path of damage across the Gulf Coast and the southeastern and mid-Atlantic parts of the nation, causing damage that could total between $4 billion and $5 billion.

The storm made history by making landfall in Louisiana late on Wednesday afternoon -- the fifth named storm of the 2020 Atlantic hurricane season to do so -- and then it weakened into a tropical storm after it plowed inland and picked up forward speed through the night.

Zeta's maximum sustained winds were 50 mph as it raced northeastward at a breakneck pace of 55 mph on Thursday evening. It barreled well past Cape May, New Jersey, spreading wind and rain farther to the north and east, before heading out over the open Atlantic.

A 55-year-old man was confirmed dead after he was electrocuted by downed power lines in New Orleans as the storm pummeled the Gulf Coast. A 58-year-old man was killed as he drowned in floodwaters in Biloxi, Mississippi, while attempting to film the storm's surge. Four people died across Georgia and Alabama due to falling trees.

The estimated damage and total economic loss due to Hurricane Zeta is expected to be between $4 billion and $5 billion, according to AccuWeather Founder and CEO Dr. Joel N. Myers.

“Our estimate of the economic damage caused by the storm is primarily due to powerful storm surge, damaging winds, downed trees and outages that initially left over 2 million customers without power and more than 1.5 million still without power Friday morning,” Myers said. “In addition to the costs of power outages, we factor into our estimate damage to homes and business as well as their contents and cars, jobs and wage losses, food spoilage, agricultural losses, infrastructure damage, damage to businesses and their buildings and contents to businesses and residents."

Officials warned that the storm's deadly dangers were far from over both in the storm's wake and as it continued to rampage across other areas of the South. Louisiana Gov. John Bel Edwards warned that "now is not the time to go sight seeing" in a tweet Thursday morning, adding that, "everyone needs to remain vigilant, continue to listen to local officials and be safe." Flooded roads, downed power lines and displaced wildlife were among the hazards that remained in the aftermath of the storm.

Hurricane Zeta damage in southern US

The storm proved tumultuous and deadly in the metro Atlanta area Thursday morning as downed trees wreaked havoc with the morning commute for several major roadways. According to the Atlanta Journal-Constitution, one death was reported in Cherokee County after a tree fell onto a mobile home. Cherokee County sits north of Atlanta, and this was believed to be the first fatality in the Atlanta area.

As communities along the Gulf Coast region come to grips with the aftermath of Zeta, the scope of the damage is becoming more apparent.

In Waveland, Mississippi, Mayor Mike Smith told WLOX-TV that his city hadn’t seen this amount of damage since 2005’s infamous Hurricane Katrina, according to The Associated Press. President Donald Trump declared an emergency in the state and authorized the Department of Homeland Security and the Federal Emergency Management Agency to provide disaster relief.

Mobile, Alabama, was placed under a general curfew by Mayor Sandy Stimpson due to power outages at intersections, dangling traffic lights, tree limbs and weakened and leaning trees. The curfew is in effect from 6:30 p.m. Thursday to 6:30 a.m. Friday, local time, and does not apply to regular members of law enforcement and employees of local industries traveling to and from work, so long as they have proper identification in the event the they get stopped by law enforcement.

Elsewhere along the Gulf Coast, AccuWeather National Weather Reporter Jonathan Petramala is in Cocodrie, Louisiana, where Zeta made landfall Wednesday evening. Petramala shared a video to Twitter showing mud, grass and power lines strewn everywhere and also shared a photo of a roof that had been ripped apart by Zeta.

Falling trees crashed down onto homes and sliced through mobile homes in hard-hit Citronelle, Alabama, according to AccuWeather National Reporter Bill Wadell, who ventured out to assess storm damage and talk with residents on Thursday morning.

Miraculously, one family who rode out the storm in their rental home, which was buried by trees was OK, Wadell reported.

Scores of buildings in the small coastal Louisiana village of Cocodrie, where Hurricane Zeta made landfall as a Category 2 storm on Oct. 28, 2020, had the roofs ripped off by sustained winds of 110 mph. (AccuWeather / Brandon Clement)

Before the light of day revealed the damage wrought by Zeta, areas pummeled by the hurricane were left in darkness with widespread power outages. New Orleans, which had been spared a direct hit amid the tumultuous 2020 Atlantic hurricane season, was not as lucky this time as the 27th storm of the season battered the area late Wednesday.

The usually vibrant and lively streets of New Orleans were thrust into darkness on Wednesday after Zeta knocked out power throughout much of the city. Video taken by resident James Arey and shared with Storyful captures the uniquely eery landscape.

“It’s been a long time since I’ve seen the entirety of St. Charles Avenue without power,” he said. “But there you go.” 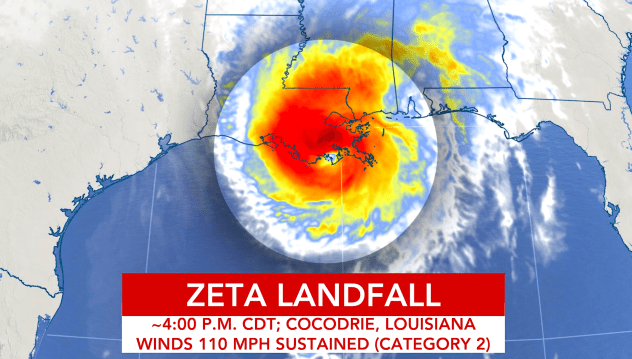 The fast-moving Zeta made landfall around 4 p.m. CDT Wednesday near Cocodrie, Louisiana, a small and sparsely populated village about 80 miles south of New Orleans, then sliced through the southeastern portion of Louisiana, its eye moving directly over New Orleans, leaving behind a flooded mess in its wake.

Zeta was at its strongest as it reached the coastline as a Category 2 hurricane with maximum sustained winds of 110 mph. This was just 1 mph shy of being a Category 3 storm, which is the benchmark for being considered a major hurricane.

Along with the strong winds, storm surge and wind-whipped rain left many coastal and low-lying areas of southeastern Louisiana underwater. AccuWeather National News Reporter Jonathan Petramala was near Grand Isle, Louisiana, just a few miles away from where Zeta made landfall, and witnessed a boat that was over Highway 1 near the coast due to the storm surge.

"[I] watched this home's roof explode off in the inner eyewall of Hurricane Zeta," Petramala said. Although the roof was gone, the home was above the storm surge.

A water level station near Ocean Springs, Mississippi, located just east of Biloxi, recorded a storm surge of nearly 10 feet. This is one of the highest confirmed storm surge levels from Zeta.

Power outages surpassed 2 million on Thursday from Louisiana through Virginia in the wake of Zeta's damaging winds, according to PowerOutage.us. As of early Friday morning, Georgia has the most outages of any state with over 379,000. Louisiana followed closely behind with over 359,000 power outages. 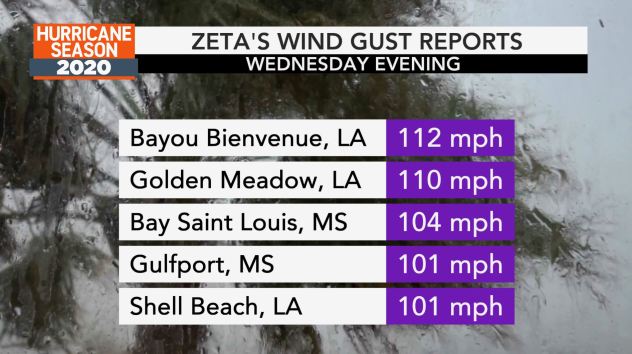 Gov. John Bel Edwards' pen was used probably more than he'd like this year after signing so many state of emergency declarations.

On Tuesday, a mandatory evacuation order was issued for the area of Grand Isle. The barrier island town prepared itself for the storm by fortifying with tons of rocks and hundreds of sandbags, according to Fox 8. A new levee was also recently built on the bayside just in time but was was breached during the height of the storm, according to local officials.

Conditions began to deteriorate along the Louisiana coast on Wednesday morning as the northern part of the hurricane arrived.

“Grand Isle is a place that has been evacuated six times so far this season, so you had mandatory as well as voluntary evacuations, this is the seventh time, and it appears that the seventh time is the unlucky number,” Petramala said.

Petramala added that the beachfront, which serves as a levee to protect against storm surge, has been so continuously beaten down this busy season that officials haven’t had time to make necessary repairs from the beach erosion and damage previously sustained.

“When I got into New Orleans [on Tuesday], I didn’t notice much in the way of preparations, it seemed like people have had some fatigue,” Petramala said. “As much as officials try to encourage folks to not have that hurricane fatigue, you can imagine how difficult that is after the seventh time they’ve been in the cone of uncertainty.”

Earlier in the week, Gov. Edwards declared a state of emergency and warned residents to prepare for another strike.

"The good thing and the bad thing is we've had a lot of practice this year," he said.

The practice began in June with Tropical Storm Cristobal before Tropical Storm Marco and Hurricane Laura both arrived in the final week of August. Before the people of Cameron Parish could finish cleaning the mess left by Laura, the strongest hurricane of 2020 thus far, Hurricane Delta struck the same area in early October. 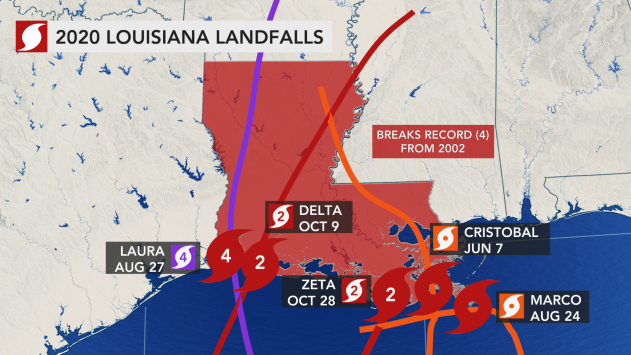 Prior to reaching the U.S., Zeta made landfall on the Yucatan Peninsula of Mexico while at Category 1 strength shortly after 11 p.m. CDT Monday. The storm unleashed heavy storm surge, heavy rain and strong winds through Monday night, which led to various amounts of damage in places like Cozumel.