How does SARS-CoV-2 spread? This laser demonstration shows how easily it happens

When someone speaks, they release droplets that can contain infectious particles as shown by the National Institute of Health and University of Pennsylvania.

Person-to-person transmission of viruses has been known to spread through aerosols and droplets, but a recent study aiming to shed light on how easily SARS-CoV-2, the virus that causes COVID-19, spreads shows it may also be transmitted simply by talking.

Using laser light-scattering, researchers from the National Institutes of Health (NIH) and the University of Pennsylvania conducted an experiment to better understand the transmission of viruses through the simple act of speaking. Their findings were published this week in The New England Journal of Medicine.

The experiment was conducted by having an individual speak the words "stay healthy" behind a box, first without a face covering, and then again while wearing a face covering, and visualizing the droplets using a green laser that was directed through slits on the sides of a box.

Dust was eliminated from the experiment by using a high-efficiency particulate air (HEPA) filter in order to ensure only droplets from speech were being visualized.

The brightness of the green flashes seen in the video represented the size of the particles and the amount of time they were present in the air.

The all-in-one guide to wearing masks during the COVID-19 pandemic
Coronavirus pandemic: Answers to practical questions about the spread of COVID-19
‘Rapid expert consultation’ on new coronavirus and weather sent to top White House adviser

In the first experiment, when speaking without a mask on, the droplets traveled 50-70mm (2-2.75in) before being shown in the light.

The highest concentration of droplets appeared when pronouncing the "th" portion of the word "healthy." Up to 347 flashes showed in the laser light. When the phrase was repeated twice more, similar patterns were found.

When a slightly damp washcloth was placed over the mouth and used in the second experiment, a remarkably low 0.1 flashes were present when speaking. The damp cloth was used to simulate "the effect of a face covering or mask on blocking saliva droplets from being released into the air when we speak," Lisa Yuan, a spokesperson for the NIH, told AccuWeather in an email.

The difference between the two experiments showed a major decrease in spreading droplets when a face covering is used over a speaker's mouth. 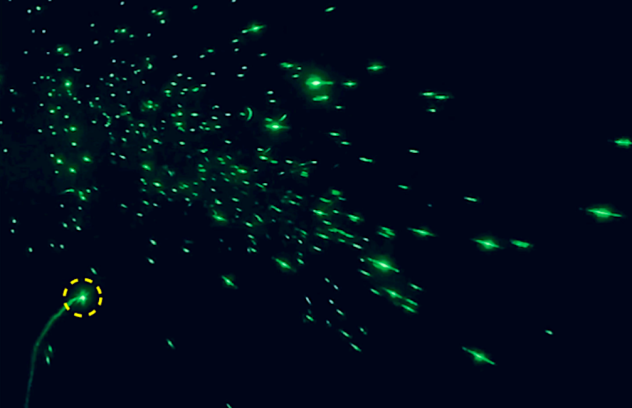 Droplets generated during speech produced flashes as they passed through the light sheet in this experiment. This image shows frame 361 from the video, the point at which the highest number of speech droplets occurred. (NIH)

Additionally, it was revealed that as the speech volume increased, more droplets were released from the speaker's mouth.

The researchers who conducted the study concluded that infectious virus particles have the potential to spread through speaking and that face coverings drastically decrease the spread of potentially harmful droplets when talking.

This new study comes at a time when face masks are becoming a mandatory part of life for Americans and people all over the world. A doctor from Yale recently told AccuWeather that Americans should get used to wearing face masks while in public for another 18 months. Yuan told AccuWeather that the NIH defers to the CDC for public health recommendations, and currently, the CDC is urging Americans to wear face coverings while out in public.

For more information on how to make and wear face masks, click here.