Most people know about sea-level rise as a result of warming oceans and melting glaciers but not in relation to sinking land, and that's exactly what's happening along the part of the East Coast.

Geological changes along the East Coast as a result of the last ice age are causing land to sink along the seaboard. This is exacerbating the flooding effects of sea-level rise.

Most people know about sea-level rise as a result of warming oceans and melting glaciers, but not many are aware of the fact that geological changes as a result of the last ice age are also causing land to sink.

Seas are projected to rise by several feet this century, according to Climate Central. On average, climate change is causing seas to rise globally by more than an inch per decade and that rate is increasing as rising levels of greenhouse gases in the atmosphere trap more heat, melting ice and expanding ocean waters. The rising seas dramatically increase the odds of damaging and deadly floods from storm surges, but scientists say rising seas are only one piece of the puzzle.

A study published in the journal Nature in 2018 found that the land along the East Coast is also sinking. Chris Piecuch, an assistant scientist at the Woods Hole Oceanographic Institution in Falmouth, Massachusetts, worked on the study. Piecuch and his colleagues used tide gauges, sea level data going back thousands of years, coastal sediment analysis and GPS data to paint what the Harvard Gazette calls "the most accurate picture ever of sea-level rise along the east coast of the U.S."

“What Chris (Piecuch) has done is to pull together disparate information that was distributed across a number of locations and different time intervals and put them together in a fully probabilistic way, allowing for better estimates of historical rates of sea-level change and how the ongoing response to the last ice age will contribute to future changes,” Peter Huybers, professor of earth and planetary sciences at Harvard, explained to the Harvard Gazette. 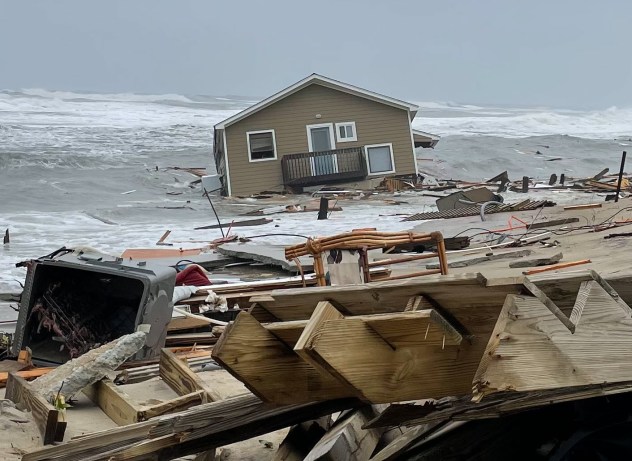 A house washes away into the Atlantic Ocean in Rodanthe, North Carolina, in May 2022. (National Park Service)

The Laurentide Ice Sheet pushed south from the Arctic between 20,000 and 95,000 years ago during the last ice age, researchers noted. It spread across most of Canada, down into modern-day New England and the Midwest. The heavy ice compressed the earth beneath it which caused the surrounding land to curl upward.

"You can kind of picture that as kind of like sitting on the seesaw and so that side of the seesaw the ice sheet is sitting on goes down. But what happens to the other end? It kind of gets levered up." Piecuch explained. "Along the East Coast, that was the part of the seesaw that used to be up and now it’s sort of falling down."

Since the ice sheet melted some 25,000 years ago, the land that was beneath the ice sheet is springing back up and the land at the edges that was levered up is slowly sinking back down making the relative rise of sea level in the mid-Atlantic about twice the global average.

Last year, a study from Rutgers University found the rate of 20th-century sea-level rise along the East Coast of the U.S. was the highest in the past 2,000 years. Piecuch says the results could be devastating for coastal communities.

“You really can’t over-emphasize how big of a deal sea-level rise is and how millions of people will be affected by this," he added. "Not just in the century but in the coming decades.” 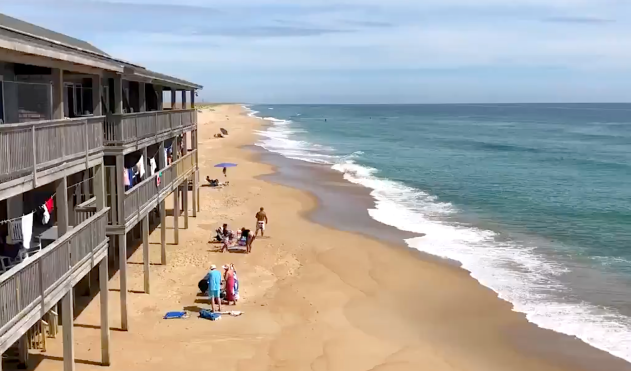 A view of the beach at Cape Hatteras in Buxton, North Carolina, along the Outer Banks. (Janet Morrow Dawson via AccuWeather)

Around the Chesapeake Bay and Cape Hatteras, North Carolina, the sea level is rising close to three times the global average. A report released by the U.S. Geological Survey in 2013 determined groundwater withdrawal by municipal utilities and other users is exacerbating the land subsidence, which is the gradual caving in or sinking of an area of land.

USGS hydrologist Jack Eggleston found that land is subsiding the fastest in the Chesapeake Bay area where the greatest amount of groundwater pumping is happening.

“If you pump a lot of groundwater it can actually affect the sediment in such a way that things compact and you have more subsidence, so you’re getting subsidence on top of subsidence,” Piecuch explained.

Because of the combined effects of the natural subsidence of the land and human-caused rises in sea level, people living in the mid-Atlantic who already deal with more frequent coastal flooding should prepare for greater rates of sea-level rise. Piecuch said a better understanding of flooding events at a local level will help mitigate the impacts.