A core of ice age sediment from northern Greenland has revealed the now largely lifeless polar region was once home to rich plant and animal life.

By By Katie Hunt, CNN, 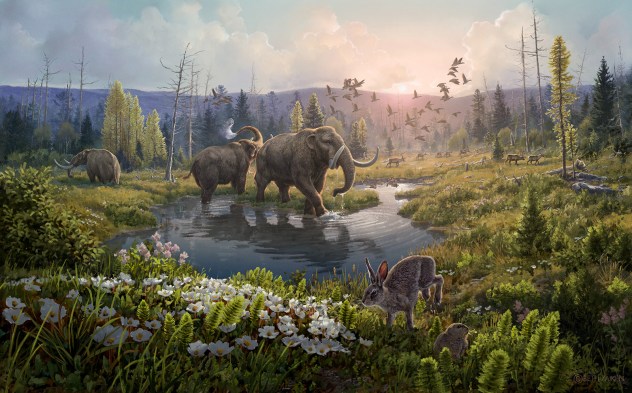 An artist's reconstruction of what the Kap Kobenhavn Formation in northern Greenland might have looked like 2 million years ago. (Beth Zaiken)

(CNN) -- A core of ice age sediment from northern Greenland has yielded the world's oldest sequences of DNA.

The 2 million-year-old DNA samples revealed the now largely lifeless polar region was once home to rich plant and animal life — including elephant-like mammals known as mastodons, reindeer, hares, lemmings, geese, birch trees and poplars, according to new research published in the journal Nature on Wednesday.

The mix of temperate and Arctic trees and animals suggested a previously unknown type of ecosystem that has no modern equivalent — one that could act as a genetic road map for how different species might adapt to a warmer climate, the researchers found.

The finding is the work of scientists in Denmark who were able to detect and retrieve environmental DNA — genetic material shed into the environment by all living organisms — in tiny amounts of sediment taken from the København Formation, in the mouth of a fjord in the Arctic Ocean in Greenland's northernmost point, during a 2006 expedition. (Greenland is an autonomous country within Denmark.)

They then compared the DNA fragments with existing libraries of DNA collected from both extinct and living animals, plants and microorganisms. The genetic material revealed dozens of other plants and creatures that had not been previously detected at the site based on what's known from fossils and pollen records.

"The first thing that blew our mind when we're looking at this data is obviously this mastodon and the presence of it that far north, which is quite far north of what we knew as its natural range," said study coauthor Mikkel Pedersen, an assistant professor at the University of Copenhagen's Lundbeck Foundation GeoGenetics Centre, at a news conference.

While DNA from animal bones or teeth can shed light on an individual species, environmental DNA enabled scientists to build a picture of a whole ecosystem, said professor Eske Willerslev, a fellow of St John's College at the University of Cambridge and director of the Lundbeck Foundation GeoGenetics Centre. In this case, the ecological community researchers reconstructed existed when temperatures would have between 10 to 17 degrees Celsius warmer than Greenland is today. 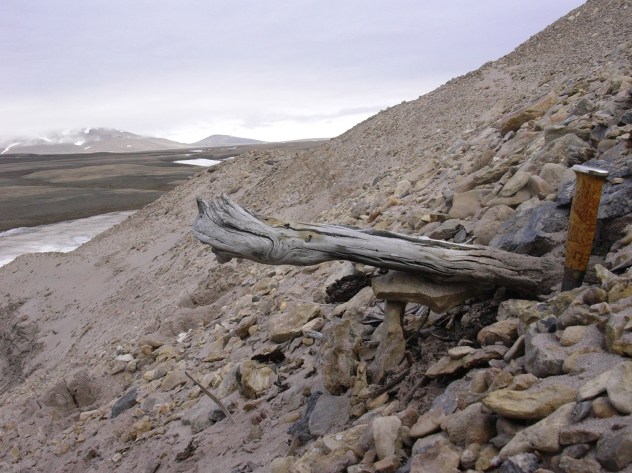 A 2 million-year-old trunk from a larch tree still stuck in the permafrost within the coastal deposits in northern Greenland. The tree was carried to the sea by the rivers that eroded the former forested landscape. (Professor Svend Funder)

"Only a few plant and animals fossils have been found in the region. It was super exciting when we recovered the DNA (to see) that very, very different ecosystem. People had known from macrofossils that there had been trees, some kind of forest up there, but the DNA allowed us to identify many more taxa (types of living organisms)," said Willerslev, who led the research.

Researchers were surprised to find that cedars similar to those found in British Columbia today would have once grown in the Arctic alongside species like larch, which now grow in the northernmost reaches of the planet. They found no DNA from carnivores but believe predators — such as bears, wolves or even saber-toothed tigers — must have been present in the ecosystem.

Love Dalen, a professor at the Centre for Palaeogenetics at Stockholm University, who worked on the mammoth tooth DNA research but wasn't involved in this study, said the groundbreaking finding really "pushed the envelope" for the field of ancient DNA. 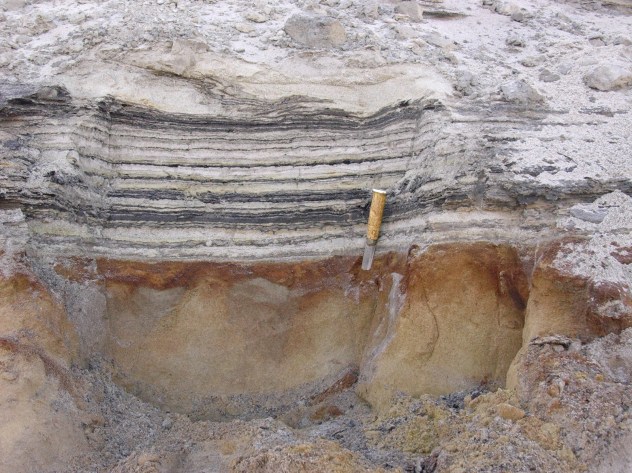 A close-up of organic material in the coastal deposit at the Kap Kobenhavn Formation in northern Greenland. (Professor Svend Funder)

"This is a truly amazing paper!" he said via email. "It can tell us about the composition of ecosystems at different points in time, which is really important to understand how past changes in climate affected species-level biodiversity. This is something that animal DNA cannot do."

"Also, the findings that several temperate species (such as relatives of spruce and mastodon) lived at such high latitudes are exceptionally interesting," he added.

Willerslev said the 16-year study was the longest project of its kind he and most of his team of researchers had ever been involved in.

Extracting the fragments of genetic code from the sediment took a great deal of scientific detective work and several painstaking attempts — after the team established for the first time that DNA was hidden in clay and quartz in the sediment and could be detached from it. The fact that the DNA had binded itself to mineral surfaces was likely why it survived for so long, the researchers said.

"We revisited these samples and we failed and we failed. They got the name in the lab the 'curse of the København Formation,'" Willerslev said.

Further study of environmental DNA from this time period could help scientists understand how various organisms might adapt to climate change.

"It's a climate that we expect to face on Earth due to global warming and it gives us some idea of how nature will respond to increasing temperatures," he explained.

"If we manage to read this road map correctly, it really contains the key to how organisms can (adapt) and how can we help organisms adapt to a very fast changing climate."