Salad prices are soaring. An unusual culprit may be to blame

Eating habits changed during the pandemic. Add to that a lettuce crop disease that is being exacerbated by weather conditions and climate change, and it has created a perfect storm. 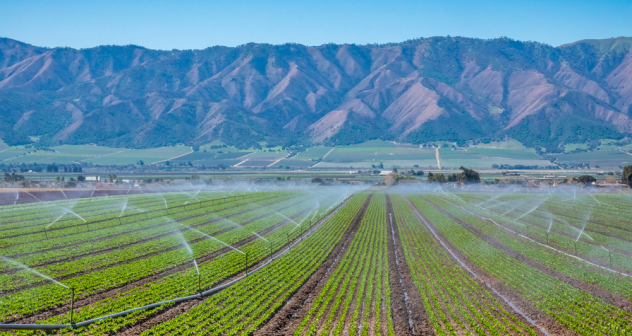 A lettuce crop in California's Salinas Valley. Photo via Shutterstock.

It’s not your imagination: that salad on your table is getting more expensive.

Some data points back to shifting eating patterns that emerged from the pandemic in 2020. Produce farmers like Fresh Del Monte Produce Inc FDP+0.45%+ Free Alerts struggled in 2020 and even lost money in the fourth quarter of that year. But that’s not the whole story.

While humans suffered a pandemic, produce was suffering from its own disease.

The average price of romaine lettuce in U.S. cities reached $3.14 per pound in October 2022, up 55% since February 2020, the month prior to when the pandemic hit U.S. shores, according to data from the St. Louis Federal Reserve Bank.

The Perfect Storm for Lettuce

Farmers did grow less in response to pandemic eating habits, but the disease known as Impatiens Necrotic Spot Virus (INSV) descended on the lettuce crop in 2022 to add to the perfect storm.

The virus causes wilting, stem death, stunting, yellowing, poor flowering, "chicken pox-like" sunken spots on leaves and etches, or ring spots on leaves, and is spread by thrip insects, according to Penn State University. And climate is a huge part of the equation.

Hot weather, particularly in areas known for a bumper lettuce harvest, amplifies the disease, which can be spread easily from crop to crop. INSV was first reported in 2006 in the Salinas Valley in California, which is responsible for 70% of the U.S.’s crop.

A warmer-than-expected summer has resulted in chronic shortages that, when, faced with increasing demand, has led to a price spike.

How Dire Is The Situation?

The Salinas Valley, the “Salad Bowl of the World,” as it lovingly refers to itself, recorded temperatures nearly 1% above 2019’s average levels over the course of the 2022 growing season from March through October. In September, temperatures were 7% above 2019’s levels, according to AccuWeather data. And “without the cold winters that we used to get, we’re not able to break this virus cycle,” Jennifer Clarke, executive director of the California Leafy Greens Research Board, said.

The bottom line is that it’s hitting consumers where it matters most — and worldwide.

Firsthand accounts, like from Instagram account named "TCD covering the news in Dearborn, Michigan, reported that a local chain restaurant, Antonio’s Cucina Italiana, no longer offered salads at two of its locations, claiming the average cost of Romaine lettuce a year ago was $15 to $20 per case and is now at an all time high of $97 per case.

Additionally, a Twitter user named Chris Gillett, supervisor producer for ABC News Melbourne, posted a picture on Twitter of a head of iceberg lettuce going for AU$10 ($6.74) to AU$11.99 per head in Australia.

There are no winners. Some industries, like oil and gas, can benefit from structural supply constraints driving up prices. Farmers are losing crops, and consumers are paying more, adding to rising costs elsewhere. The latest inflation data from the U.S. Census Bureau pegged November inflation at 7.1%.

If farmers such as Dole PLC DOLE-0.40%+ Free Alerts have a worse-than-expected harvest from bad weather conditions or diseases, this may negatively impact the bottom line, as its dwindling supply will not be able to keep up with cost.

AccuWeather’s long-range winter forecast calls for some chillier periods in the West that can impact California on occasion, but not persistent ones like in the Northwest and northern Rockies.

Precipitation is expected to average near normal in the region but below average farther south. Unfortunately, this will not solve the problem, but maintain similar or slightly improved levels for next year.

This also poses a dilemma for grocery stores such as Kroger Co KR-0.45%+ Free Alerts or Walmart that try to offer their customers compelling prices and quality.

How big of a hit will this have on already constrained household budgets? And will the grocery stores compete for supply with casual eateries like Panera Bread and Taco Bell that are already reporting lettuce shortages? Time will tell.

Great Salt Lake will disappear in 5 years without massive intervention