While this season's harvest won't be a complete loss as farmers had feared, the consequences of the brutal winter outbreak still weigh heavily on Texas grapefruit producers.

Orange and grapefruit growers in South Texas took a huge hit from a historic freeze in February, but experts say the harvest will be larger than expected.

Nine months following the historic February Freeze across Texas, the state's grapefruit industry is still reaping the detrimental impacts from the frigid weather.

The winter outbreak that had swept into the subtropical southeastern portion of the state on Valentine's Day ushered in icy conditions and extreme cold temperatures that damaged two different crops of grapefruit across the region. This season's crop of grapefruit, which had only been blooming at the time of the winter outbreak, is expected to provide less than a third of an average harvest.

Texas had been the number one provider of fresh grapefruit in the nation ahead of the outbreak, but the damage done to the groves has since dropped them down to third in the nation, Dale Murden, the president of Texas Citrus Mutual, a trade group that represents the interests of the state's citrus growers, told AccuWeather's National Reporter Bill Wadell.

Murden had also spoken with AccuWeather via email back during February. Also a grower, he had mentioned that when temperatures dip below 28 degrees and stay below that mark for five hours or longer, the fruit on the branches begins to freeze on the inside, damaging the crop. "Most everyone" saw temperatures drop to at least 21 degrees, he had added. 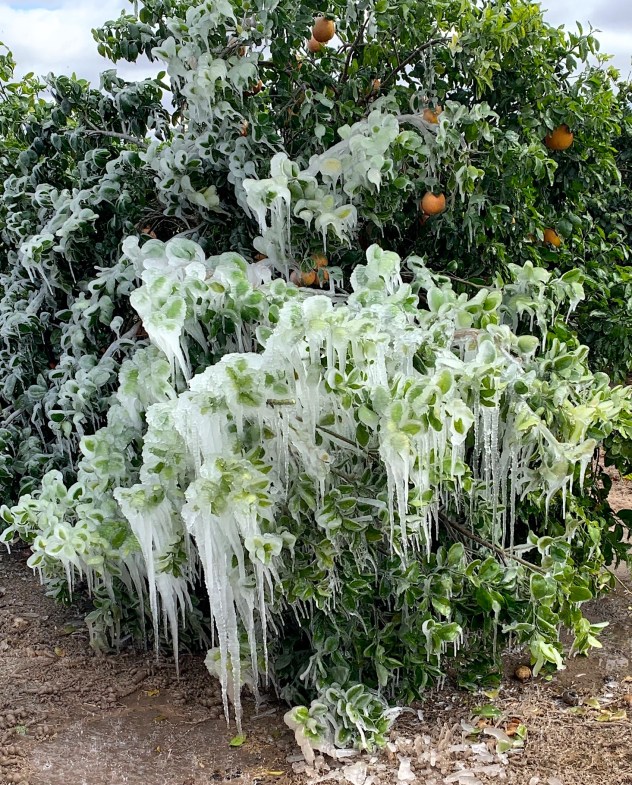 The freeze had hit when the groves still had two crops on the trees -- the fruit that was still being harvested and the following season's crop that was beginning to flower. Murden estimated about 60% of the fruit had remained to be harvested at the time. However, winter's scythe cut more significantly into the then-flowering groves' crop that farmers are now waiting to harvest as fruit.

Murden estimates they'll have about 30% of a normal crop this harvest due to the freeze. The fruit that did survive will be harvested closer to late November rather than when the season typically starts around mid-September into early October. The estimated total financial loss from the freeze hovers around $300 million.

This isn't the extent of the damage either.

As they spoke, Murden and Wadell stood beside an empty grove. Normally an acre holds roughly 180 trees, with a standard grove of 20 acres holding thousands of trees. But after February, the decision had been made that it wasn't fiscally worth saving the damaged trees of this particular grove.

"It was just decided that the economics of trying to rehab that grove versus just removing it and replanting at a later date just didn't pan out," Murden said. It wouldn't be the only one to be uprooted and regrown.

"You've seen the groves that didn't make it and that we've pushed out," Murden said. "There's been 2,000 acres of citrus pushed out to date because of the freeze."

Groves that have been uprooted and replanted may not come into production for another three to five years, creating an additional setback in the expected crop.

But while the cold hit hard, the season wasn't a total loss as farmers first feared, and farmers like Murden are looking ahead to rebuilding the groves back stronger as had been done in the past.

"Every time we've had a natural disaster or something like that, we've actually rebuilt better and stronger," Murden said. He added that after the 1983 freeze hit, they had taken the opportunity to switch from growing pink grapefruit to red grapefruit.

"We always come back better and stronger and smarter," Murden said.