A pair of winter storms will have the potential to bring travel issues across parts of the central and eastern United States late this week and into the first full week of March. In some locations, big temperature fluctuations are in store, and snow and ice may follow temperatures more fitting of April or May.

As is often the case with March, the weather can prove volatile, and that will be on display this weekend, as the storms will also bring a severe weather danger across parts of the Midwest and the southern U.S. where warmer air is in control.

Snow and ice from the first storm may avoid major cities of the Midwest, including Chicago and Detroit, but other areas such as Minneapolis will experience potentially disruptive snow and ice. Areas farther to the east, such as northern New York state and New England, will face wintry precipitation from Friday night to Saturday night as well.

The two storms will first bring wild weather changes to the western U.S. along with much-needed rain and mountain snow before they turn eastward late this week into early next week. 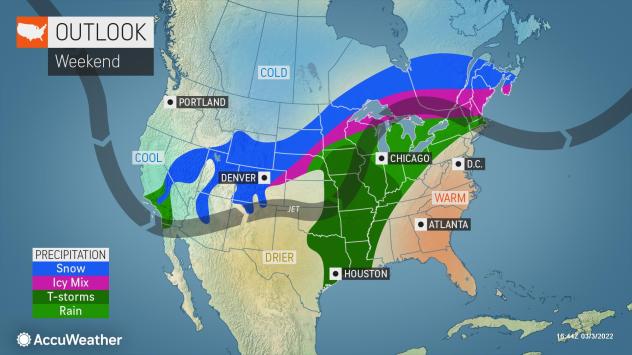 The first storm will tend to transfer its energy from California to northeastern Colorado and western Nebraska on Friday. This transfer is actually a fairly common maneuver for storms as they attempt to cross the high mountain ranges of the West. As this storm then travels northeastward along the edge of a bulging area of warmth over the Plains during Friday night and the Great Lakes region on Saturday, a zone of snow and ice will develop and expand near and north of the storm track.

As is often the case in Denver, and especially so in the spring season, dramatic changes in the weather are expected to cause weather whiplash in the Mile High City late this week. The high temperature was 72 on Thursday and is forecasted to be in the 60s on Friday before colder air and snow arrive from Friday night into Saturday. Temperatures may not get out of the 30s on Saturday as snow makes roads and sidewalks slushy and slippery. It is the second of the two storms that has a better chance of bringing a couple of inches of snow and more general slippery travel in Denver late in the weekend. 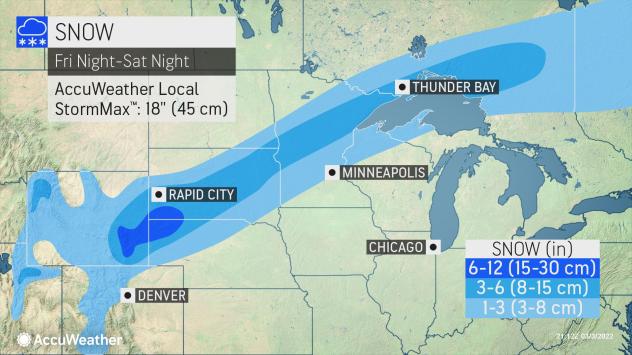 A band of somewhat heavier snow is likely to develop from southeastern Wyoming to western Nebraska and extend across portions of South Dakota on Saturday. The snow is then expected to track across central and northern Minnesota and into parts of northern Wisconsin and the Upper Peninsula of Michigan Saturday night, according to AccuWeather Senior Meteorologist Brett Anderson.

Within this zone, a few inches to perhaps as much as a foot of snow may fall, especially over portions of the High Plains. Travel along portions of I-80, I-90 and I-29 could be slow and difficult with road conditions ranging from wet to slushy to snow-covered.

Minneapolis is likely to get wintry precipitation on both the front and the back end of the first storm, but a wintry mix and changeover to rainfall could limit total accumulations. Still, slippery driving conditions will be possible as a mixture of snow, sleet and freezing rain will spread over the Twin Cities from Friday night into Saturday morning. Lingering mild air will allow for multiple hours of rain in the metro area from Saturday to Saturday evening, but just enough cold air may sweep in Saturday night to bring a period of snow. Temperatures by Sunday morning will dip into the 20s, and any wet and slushy areas are likely to become slippery once again.

Farther to the east, Chicago, Milwaukee and Detroit are expected to receive rain from the first storm from Friday night to Saturday night, with a wintry mix zone forecast to extend across areas farther to the north for a time across Wisconsin and the Upper Peninsula of Michigan. However, much of the colder areas of both states will transition to rain during the height of the storm. In much of this zone, the rain will simply end as the first storm moves away. 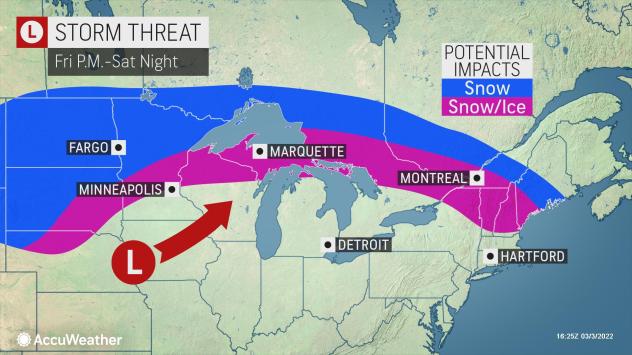 "In the Northeast, the majority of ice or a wintry mix will generally be confined to northern New York and central and northern New England with rain forecast for Pittsburgh, New York City, Hartford, Connecticut, and Boston on south from Saturday afternoon to Saturday night and early Sunday," AccuWeather Senior Meteorologist Bill Deger said.

But, in the northern areas of the region in cities such as Burlington, Vermont; Manchester, New Hampshire; and Bangor, Maine; a wintry mix, including some ice, can occur. Even in areas that pick up some ice and snow, a transition to rain is likely at the height of the storm, and road conditions should improve from later Saturday night to Sunday.

As the first storm moves eastward along the Canada and U.S. border this weekend, AccuWeather forecasters say there will be a significant temperature contrast with a few hundred miles. Highs will be in the 20s and 30s across the northern tier of the country as temperature readings in the 50s, 60s and 70s occur in locations south of the storm.

Behind the first storm, colder air will also plunge southward across portions of the Plains and Midwest then across part of the Northeast later this weekend to early next week. The temperature contrast zone will shift southward by hundreds of miles as a result. 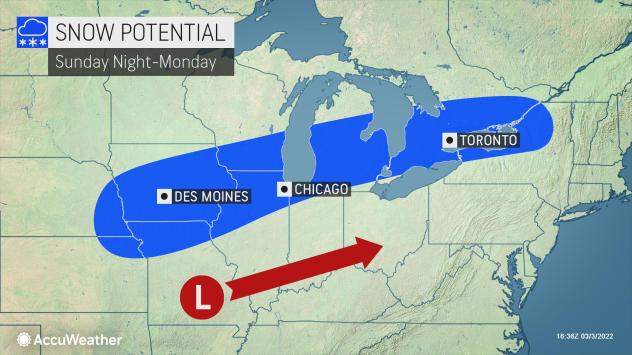 For example, around Montpelier, Vermont, following a period of ice on Saturday night, temperatures will rise into the 50s on Sunday. But, by Monday, temperatures may fail to climb much above 40 and are likely to dip below freezing Monday night as the next storm gets underway.

"Just as portions of the High Plains and Rockies are shocked by cold air and snow associated with the first storm, the same can happen to areas farther south in the Midwest and perhaps the Northeast early next week," AccuWeather Senior Meteorologist Joe Lundberg said, adding that "some areas may go from highs in the 50s and 60s this weekend to a snowstorm or at least a period of snow early next week."

The exact track of the second storm along that farther south temperature boundary will determine where a new band of snow or wintry mix sets up from Sunday nigt to Monday night. The potential for several inches of snow may aim at areas near the I-80/90 corridor of the Midwest and Northeast. It could develop in such a way that cities such as Des Moines, Iowa, Chicago, Detroit and Albany, New York, end up with some snow.

This may not be the last storm of the season with wintry precipitation for the Central and Eastern states.

Additional storms are likely to roll from the Rockies to the Upper Midwest with the potential for snow on their northern flank into mid-March, according to AccuWeather Lead Long-Range Forecaster Paul Pastelok.

As a result, warm weather fans should enjoy the warmth while it lasts as spring snowstorms are likely for portions of the Midwest and Northeast, which could result in some cases of weather whiplash.

New study sheds light on when the dinosaurs met their demise