Slippery travel and whiteout conditions will be possible in some of the heaviest snow areas.

An intense round of lake-effect snowfall began to unfold on Tuesday, following a multi-faceted storm that blasted portions of the Midwest and East during Monday and Monday night. Snowfall will be measured in feet in the hardest-hit areas by the middle of the week, including areas that have been experiencing way less snow than normal so far this season. Forecasters warned that the wintry weather could cause dangerously low visibility and road closures.

Rather than be spread across the entire swath of the Great Lakes region, the core of lake-effect snowfall is expected to primarily bury areas downwind of lakes Huron and Erie through much of Wednesday. A shorter duration of lake-effect snow already occurred off of Lake Michigan late Monday in northwestern Indiana and is expected to occur off Lake Ontario in northern New York state late Tuesday night and into Wednesday. 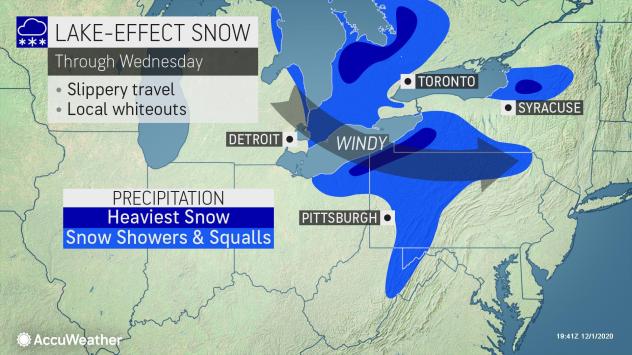 As just enough cold air will continue to pour in on the backside of a departing storm and blow across open waters of the Great Lakes, forecasters expect areas from northeastern Ohio to northwestern Pennsylvania, western New York state and southern Ontario to be clobbered by heavy lake-effect snow into the middle of this week with narrow zones expected to pick up 12-18 inches (30-45 centimeters) of snow.

Where the bands of snow persist, a couple of feet (25 cm) of snow will fall on top of the general snowfall from the storm slammed the Northeast into Tuesday morning.

"When it is all said and done, an AccuWeather StormMax™ of 36 inches of snow can be on the ground when combining snow from the general part of the storm and the lake-effect bands of snow and snow squalls that follow into midweek," AccuWeather Meteorologist Derek Witt said. 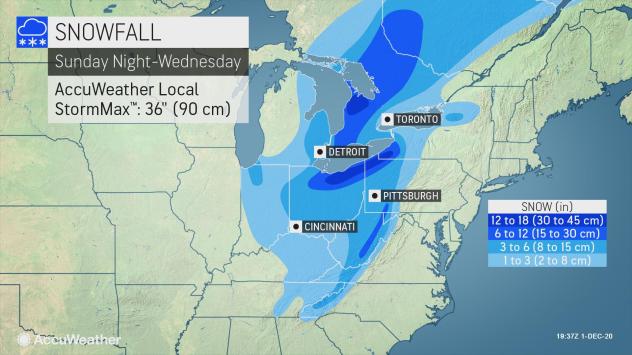 "The location of the heaviest area of snowfall will depend on the exact track that the storm takes and how long lake-effect snow bands can linger or repeat over any given spot," Witt said.

In many cases, the snow from the main part of the storm and lake-effect may blend together.

The storm is predicted to unload wet snow that will partially melt on some roads and create slushy conditions, but the intense rate of snow during the squalls and lake-effect snow bands can quickly overwhelm warm road surfaces and cause the snow to pile up quickly.

Meteorologists warned motorists who plan to travel along stretches of Interstates 70, 76, 79, 80 and 90 in western Pennsylvania, as well as I-80 and 90 in northeastern Ohio and I-86 and I-90 in western New York to be prepared for mid-winter weather conditions. The snow could accumulate fast enough to shut down stretches of highway and create extremely dangerous travel into Wednesday. A couple of snow squalls may extend as far to the east as the central counties of Pennsylvania and New York state. The squalls can produce sudden changes in visibility and cover roads with snow in a matter of a few minutes.

Buffalo, New York, is likely to avoid the heaviest snow from the storm and the lake effect that follows, but cities farther southwest, such as Jamestown, New York; Erie, Pennsylvania; and Cleveland are expected to be in the thick of the snow with accumulations heavy enough to keep shovelers and road crews busy.

Snowfall has been pacing behind normal in the areas that are expected to bear the brunt of the lake-effect snowfall. Just over an inch of snow has fallen in Erie so far this season, which is only 13% of the normal 8.7 inches that falls from the start of autumn through Nov. 30. Cleveland has picked up only 0.8 of an inch of snow so far this season, a mere 18% of the normal snowfall through November. 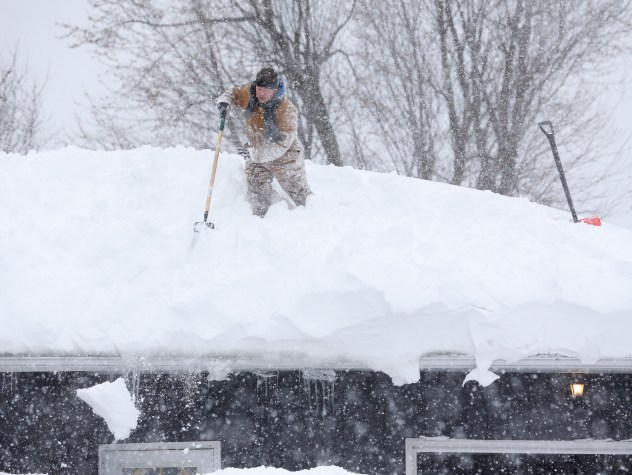 Tom Mudd clears snow from the roof of his house on Thursday, Nov. 20, 2014, in Cheektowaga, N.Y. A blast of lake-effect snow pounded the Buffalo, N.Y. area, for a third day that month piling more misery on a city already buried by an epic amount of snow. South Cheektowaga ended up with 65 inches of snow from the lake-effect event. (AP Photo/Mike Groll)

Beyond Wednesday, the storm is forecast to pivot far enough to the north to allow milder air to flow eastward from the Plains and Midwest. This should shut off the lake-effect snowfall and allow some of the snow to melt during Thursday and Friday.

What are snow squalls?
How to pick the right tires for optimal winter driving
Southern Plains set to see season's most significant snow yet

Forecasters noted that even after the wintry weather ends areas of ice could develop during the nighttime and morning as temperatures will dip below freezing.