Deadly major snowstorm leaves over a foot of snow in many areas and triggers hundreds of accidents. Get the details.

A now-viral photo of a mesmerizing yet rare cloud formation that adorned the sky for mere moments has left millions around the globe in awe. Amy Christie Hunter captured the intriguing image on her iPhone Tuesday, June 18, around 8:30 p.m. at Smith Mountain Lake near Roanoke, Virginia.

Hunter had no clue at the time that the picturesque, ocean wave-like clouds rolling through the atmosphere as she relaxed on her deck that evening were considered a phenomenon, she told AccuWeather — but she realized instantly that they were anything but ordinary.

“I just knew it was very unusual, and I was in awe of it!,” Hunter shared with AccuWeather, adding that the unique cloud formation, known as Kelvin-Helmholtz wave clouds, didn’t last for very long at all — less than a minute, in fact. “I was lucky to see it, and very lucky I had a camera to snap the fleeting moment,” the 59-year-old said.

The captivating image she posted on Facebook, which she also first sent to her local news station, has attracted a wave of interest online, having been shared more than 800 times as well as receiving hundreds of comments from users who had never seen anything like it before. A local meteorologist told Hunter that the formation is “very rare and usually not this defined.” 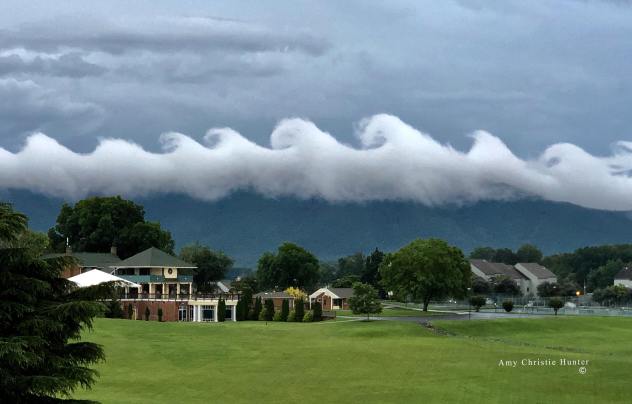 “I would have thought it was fake if I hadn’t seen it with my own eyes,” Hunter wrote on Facebook. “It was the coolest cloud formation I think I’ve ever seen!” The unique occurrence had many wondering — what exactly is it?

Kelvin-Helmholtz waves are named after the two scientists that discovered the instability: Hermann von Helmholtz and William Thomson, who was also known as Lord Kelvin, one of the fathers of modern meteorology as we know it today, according to AccuWeather Meteorologist Brett Rossio.

Although the waves themselves are unstable, AccuWeather Extreme Meteorologist Reed Timmer explained that Kelvin-Helmholtz waves occur in stable environments, like the backsides of storm complexes where rain-cooled air is present. The phenomenon resembles breaking waves on an ocean surface. These clouds can form during or after a storm, even on a partly cloudy day.

“They usually occur as repetitive wave-like features and are driven by vertical wind shear across that stable layer,” Timmer said. They encounter a vertical wind shear, or the change in direction and speed of winds at increasing heights in the atmosphere, which causes breaking waves and little repetitive curlicues on that stable layer. The instability occurs due to turbulent eddies created by very strong wind shear.

They’re sometimes observed at the base of mesocyclones, as well, Timmer said. “That’s because you get vertical wind shear along the edge of the updraft, and then you can also get stable layers near evening, and that’s when you get the sculpted look to that mothership updraft.”

Kelvin-Helmholtz clouds are a type of billow cloud, according to Rossio, which is a cloud that develops with sufficient moisture for condensation to occur as upward motion simultaneously occurs within the developing cloud. The clouds are caused by instability and can be dangerous to pilots, AccuWeather Meteorologist Jesse Ferrell said, even if the cloud does not make the waves visible.

Despite this potential danger, Timmer noted that the waves are largely harmless since they usually occur in stable environments, “Unless of course, they’re ripping along the base of an approaching mesocyclone.”

For those on the ground, the uncommon presence of Kelvin-Helmholtz waves certainly creates a spectacular scene in the sky for photographers and weather enthusiasts alike. Here we go again? 2 more winter storms could be brewing for eastern US