Thirty-two soccer teams from around the globe will converge in Russia later this month to represent their countries and compete for World Cup glory.

The 2018 FIFA World Cup is set to take place at the end of spring and during summer’s early days, from June 14 to July 15. World Cup matches will be held in 11 host cities spread across Russia, including Sochi, Moscow, Saint Petersburg and Volgograd.

As the world’s largest country by landmass, Russia is vast and covers about 6.6 million square miles, according to History.com.

Of the host cities, there are 1,550 miles between Kaliningrad in the west and Yekaterinburg in the east, said AccuWeather Senior Meteorologist Jim Andrews.

Nearly 1,200 miles lie between Saint Petersburg in the north and Sochi in the south. “There can be a great diversity of weather happening across this area at a given time, even in the relative quiet of summer,” Andrews said. 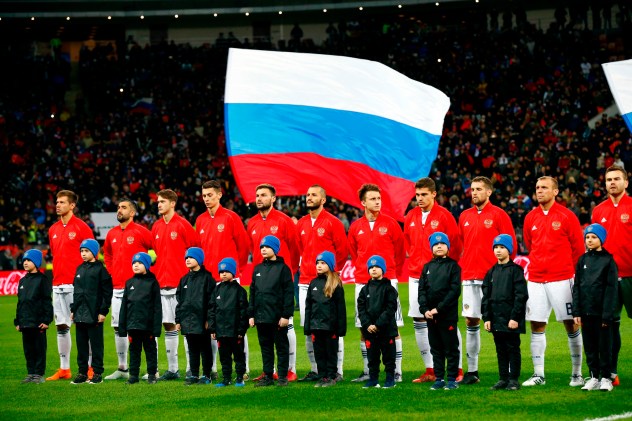 In this Friday, March 23, 2018, file photo, Russia players line up before an international friendly soccer match between Russia and Brazil at the Luzhniki stadium in Moscow. (AP Photo/Alexander Zemlianichenko, File)

This time of year tends to be warm and on the drier side for most of the World Cup host cities, although rain and strong thunderstorms sometimes occur, according to AccuWeather Senior Meteorologist Jason Nicholls.

“Much like across the United States, there is the occasional frontal passage to bring cooling as well as some rain and thunderstorms on occasion,” Nicholls said. “Strong to severe thunderstorms with downpours, hail and strong winds are not uncommon.”

He added that isolated tornadoes are also not unheard of; Sochi experienced them in August 2017.

Despite being known for its cold winters, heat waves are a common occurrence in Russia during the summer months. The average high temperatures for most host locations are in the upper 60s to low 80s Fahrenheit (20-28 degrees Celsius), with the warmest month for nearly all locations being July, according to Nicholls.

Most of the host cities lie in an east-west band having a broadly similar summer climate that correlates fairly well to south-central or eastern Canada, Andrews said.

“Highs in the 80s F happen periodically through the summer and 90 F is reached infrequently; most normal lows are 50-55 F,” said Andrews.

“Thanks to an active parade of weather systems, light to moderate rainfall typically happens every few days, often as showers and the odd thunderstorm,” he added. “Infrequently, there are soaking rains lasting a day or more.”

In the south, Volgograd and Rostov-on-Don run about 10 degrees warmer than the other sites, both day and night. In these locations, highs of 80-85 F (26-29 C) are normal beginning mid-June, with July being the warmest, according to Andrews.

“They can be very hot, even 100 degrees, and heat waves happen almost every summer,” he said. Rainfall is less frequent in these spots than northern areas, and Volgograd is semi-arid.

Sochi, which is nestled in the south between the eastern Black Sea and the Caucasus Mountains, stands apart from the other host cities, Andrews said.

“June starts not drastically different from areas well north, but by July, with the warming of the sea, it grows rather warm and a bit humid,” he said. "Normal high temperature reach 81 F (27 C) in late July, with normal lows in the mid- to upper 60s (19-20 C).”

Modest normal monthly rainfall above 3 inches can include infrequent downpours and thunderstorms in Sochi, according to Andrew.

The northernmost and coolest, on average, host city is Saint Petersburg, which lies off the Gulf of Finland, but temperatures can still soar to 32-34 C (89-93 F), according to Nicholls.

“The more landlocked sites farther south can easily have highs reach well into the 90s F, especially in July, [when highs can reach the triple digits],” he said.

Air conditioning is limited across much of Russia, Nicholls said, and intense heat can lead to poor air quality and heat stroke-related deaths.

“The heat can have a devastating effect on a team or individual over the course of a competition,” Human Vortex Training’s Head Coach, Menachem Brodie, told AccuWeather.

“The competing programs have probably done significant amounts of scouting ahead of time as to the temperatures and conditions they’ll be playing in and will have put into place protocols to help ensure each player is able to play at top levels,” Brodie said.