Mother Nature may have her holidays confused. A large swath of the United States will feel more like Christmas than Halloween as a snowstorm prepares to unload up to a foot of snow with plummeting temperatures. 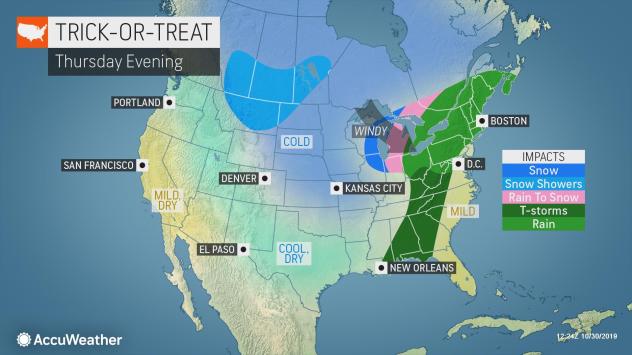 A strengthening storm is forecast to put down a corridor of heavy snow from the Plains to the Upper Midwest. Kids may be helping to shovel snow instead of trick-or-treating from Colorado to northern Michigan on Halloween.

There is the likelihood of 3-6 inches of snow with locally higher amounts and slushy roads and sidewalks. Areas that have the best chance of 6- to 8- inch snowfall include the tri-state area of Iowa, Wisconsin and Illinois, as well as part of the Upper Peninsula of Michigan.

Some of the major metro areas that are likely to be affected by at least some snow during or just prior to Halloween include Kansas City, Missouri; Des Moines, Iowa; Madison, Wisconsin; and portions of Chicago and Milwaukee.

Flashlights may be needed in some neighborhoods where wet snow brings down tree limbs and power lines. Not all of the leaves have fallen off the trees at this point in autumn.

Besides the snow, bone-chilling cold will settle into the central U.S. Cold air and gusty winds will sweep from the northern and central Plains to the western Great Lakes region on Halloween. AccuWeather RealFeel® Temperatures will dip into the 20s, teens and single digits F. The kids may need to wear warm layers under their costumes. 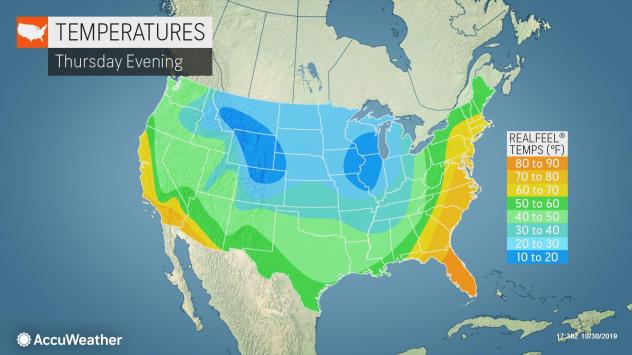 Farther to the east, the storm is forecast to pump warm, moist air northward.

Rainy and miserable conditions are likely for Thursday evening from Alabama and the western part of the Florida Panhandle to Ohio, western and northern Pennsylvania, New York state, southeastern Michigan and New England. Kids going door-to-door in this zone had best wear a plastic poncho over top of their costume and consider waterproof shoes. Or, perhaps dress up as one of those creepy phantom fishermen from John Carpenter's movie, "The Fog."

In Charleston and Huntington, West Virginia, officials have pushed back Halloween festivities until this weekend, according to the Associated Press. Several communities in the Pittsburgh area have also moved back trick-or-treating times.

The rain in this same swath is likely to be heavy enough to impair visibility, not only for trick-or-treaters, but also motorists, which can be a dangerous combination. Motorists should be extra vigilant for kids crossing streets in the rain in cities such as Atlanta; Charleston, West Virginia; Pittsburgh; Cleveland; Buffalo, New York; and Burlington, Vermont.

5 Halloween hacks for staying warm while trick-or-treating
These are officially the best Halloween haunts in America
Should you dress up your pets for Halloween?
Halloween storm to dump 1st snow of season in parts of Midwest

Temperatures in this swath will be mainly in the 60s and 70s, but near 80 in Florida.

Meanwhile, much of the central and northern Rockies will be under a fresh blanket of snow from storms earlier this week.

The storms into Tuesday night have left western Montana to central Colorado buried under a heavy snowfall.

This means that there are feet of natural snow and the deepest so early in the season in years on some of the resorts. Spending Halloween on the ski slopes might be a fun alternative for outdoor winter sports enthusiasts.

While winds will have diminished over the Rockies by Thursday evening, temperatures are forecast to plummet from the 40s and 30s to the 20s and teens as the later afternoon and evening hours progress. Temperatures in this area will be as much as 20-40 degrees below average.

Following another round of high winds and an extreme fire danger for California as well as parts of Nevada and Arizona into Thursday afternoon, winds will diminish over much of the region by Thursday evening. However, conditions in some areas may not be safe or appropriate due to recent fire activity or the threat of existing fires advancing into some neighborhoods.

The weather over much of the northwestern U.S. will be fine for trick-or-treating, although certainly chillier than most Halloweens have been. 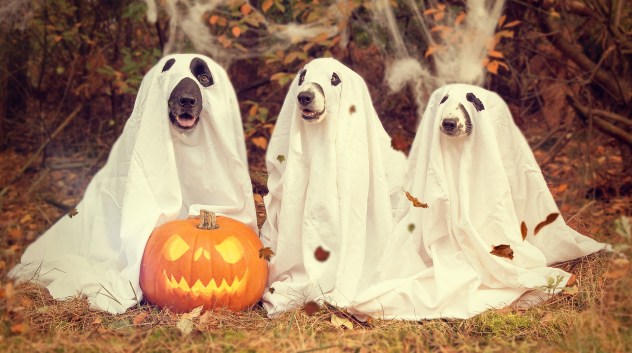 Temperatures in the Northwest are forecast to be 10-15 degrees below average and expected to fall quickly during the evening hours from the 40s to the 30s on the coast and from the 30s to the 20s across the interior. Fortunately, winds will be dead calm in many areas, so the chill should only be made worse by the little ghosts and goblins running through the neighborhoods.