Top 5 astronomy events you won't want to miss in July

As the calendar turns, stargazers are gearing up for a month filled with astronomical events, ranging from a total solar eclipse to dueling meteor showers.

Here are five astronomy events to mark on your calendar throughout July:

Day will turn into night across part of the Southern Hemisphere on July 2 as the sun, moon and Earth align during a total solar eclipse. This is the first total solar eclipse anywhere in the world since the ‘Great American Eclipse’ on Aug. 21, 2017.

Much of the eclipse will take place over the largely unpopulated area of the southern Pacific Ocean, but it will conclude across South America. 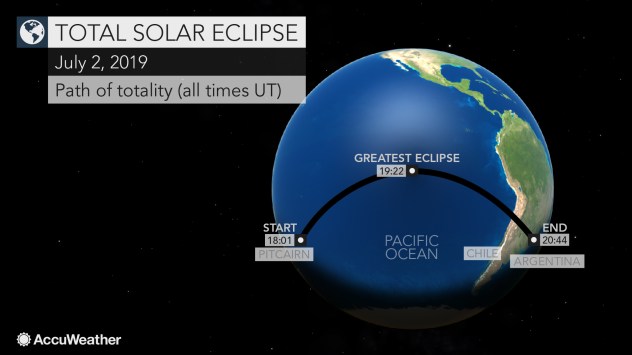 Jupiter was the highlight of the night sky in June, but the new month will feature a new planet.

On the night of July 9, Saturn will reach opposition. During this event, Saturn will be at its closest to Earth. The opposition will also coincide with time of the year when Saturn appears brightest in the night sky. The planet will be visible all night long, even in areas where there is light pollution from cities and highways.

No telescope is needed to spot Saturn, but peering through the eyepiece of one will reveal the planet’s famous rings.

Two weeks after the moon casts its shadow on the Earth, the roles will be reversed as the shadow of the Earth causes the moon to go dark.

People across Asia, Australia, Europe, Africa and South America will be able to see a partial lunar eclipse on the night of July 16 into the early morning of July 17, weather permitting. 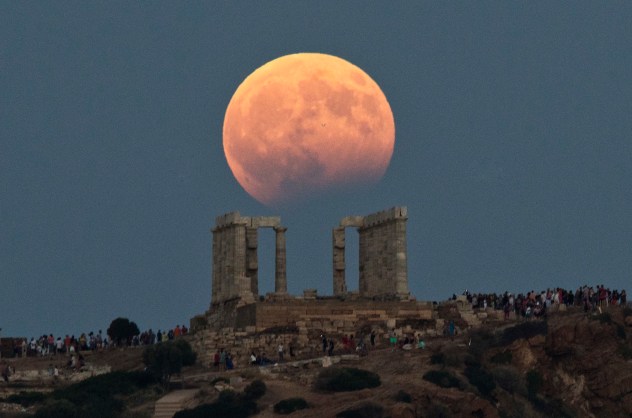 A full moon rises above the 5th Century B.C. Temple of Poseidon at Cape Sounio, south of Athens, on Monday, Aug. 7, 2017. More than a hundred of Greece's ancient sites _ but not the Acropolis in Athens _ and museums were kept open until late Monday and concerts organized to allow visitors to enjoy the full moon, which was accompanied by a partial lunar eclipse. (AP Photo/Petros Giannakouris)

The lunar eclipse coincides with July’s full moon, known as the Thunder Moon, which earned its name due to frequent thunderstorms during the month, according to the Old Farmer’s Almanac website.

Other names for July’s full moon include the Buck Moon, the Ripe Corn Moon, the Hay Moon and the Old Moon.

The end of July will feature a pair of meteor showers that will peak on the same night: the Southern Delta Aquarids and the Alpha Capricornids.

This will be the first time that a major meteor shower has been visible since the Eta Aquarids peaked in early May.

The two showers will peak on the night of July 29 into the early morning hours of July 30, bringing a combined total of around 20 to 25 meteors per hour, according to the American Meteor Society. Onlookers in dark areas should also be able to see the glow of the Milky Way as it will occur two days ahead of a new moon.

The waning hours of the month will feature the fifth major astronomy event of July, a Black Moon. However, contrary to its name, the moon will not appear black.

Black Moons are not visible as the part of the moon that is being illuminated by the sun is facing away from the Earth.

Looking back at June

June brought with it the official start to summer, boasting the longest days for areas in the Northern Hemisphere. It also brought several outbreaks of noctilucent clouds, or clouds that occur in the upper atmosphere and are typically only visible around the summer solstice.

Jupiter stole the spotlight in the night sky throughout June as it outshined every star throughout the entire month. This is because the planet was at opposition, making it appear brighter than it will be at any other point in the year. A few nights after the Jupiter opposition, the full Strawberry Moon lit up the night sky, appearing right next to Jupiter.

A meteor shower peaked earlier in the month, but many people missed out on the shooting stars. This is because the shower peaked during the daytime hours.

Near the end of June, a large meteor exploded while entering Earth’s atmosphere near Puerto Rico. The explosion was so large that it was detected by weather satellites and nuclear explosion sensors.

Hours before the sun rose on June 25, SpaceX’s Falcon Heavy mega rocket streaked across the sky, launching from Cape Canaveral, Florida, in its first-ever night launch. Just two days later, NASA announced its plans to launch a drone to Saturn’s moon Titan, the only moon in our solar system with a thick atmosphere. This will help scientists learn more about the unique moon and potentially look for signs of life.