These 10 US cities are the safest to drive in during wet, snowy weather

Allstate's 2018 America’s Best Drivers Report ranked cities in the United States based on how they safe drivers are when traveling in snowy or rainy conditions as well as how often drivers are involved in collisions.

As peak holiday travel season approaches along with a wetter-than-average winter predicted for large swaths of the southern and eastern United States, Allstate found that four of the safest cities in the country for driving in wet weather are located in Texas.

The findings were released as part of the insurance company’s 2018 America’s Best Drivers Report, which ranks the country’s largest 200 cities and surrounding metropolitan areas to determine which locations have the safest drivers when factoring in snow and rain.

“You may be surprised to know that even in warmer climates, winter weather can create dangerous driving conditions, making it more important than ever to be vigilant behind the wheel and aware of how rain and snow can impact roads,” said Ken Rosen, Allstate’s executive vice president and chief claims officer. 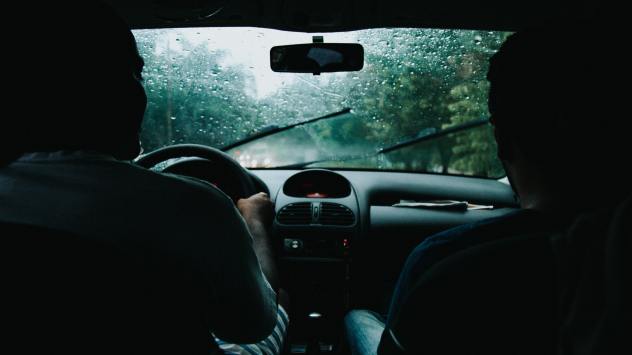 The annual report serves to draw attention to the critical community issue of safe driving, according to Allstate. It ranks cities by each location’s auto property damage claim frequency, as compared to the national average.

The recent precipitation rankings are an extension of the standard America’s Best Drivers Report, which was released in August.

The top spot this year went to Brownsville, Texas. Allstate found that the average Brownsville driver will experience a collision once every 13.6 years. The national average is one collision every decade.

At the bottom of the rankings is Baltimore, Maryland, which came in at 200 on the 2018 report. Its drivers experience a claim once every 3.8 years, according to Allstate’s data.

To figure out which cities are safest to drive in during rain or snow events, Allstate researchers used a predictive model that standardized the rankings to account for a city’s average annual precipitation, as measured by the National Oceanic and Atmospheric Administration (NOAA).

“Rain and snow can make roads slick and create dangerous driving conditions, impacting a city’s collision frequency ranking,” Rosen said. “Our data scientists create a predictive model based on average annual precipitation using publicly available data from NOAA to standardize the rankings based on how much rain or snow a city receives, and that can affect a city’s ranking."

The Allstate report is a safety awareness tool that shows how city drivers fare when considering how often the average driver will get into a crash.

Below are the top 10 safest cities for driving in wet weather, according to Allstate’s report: 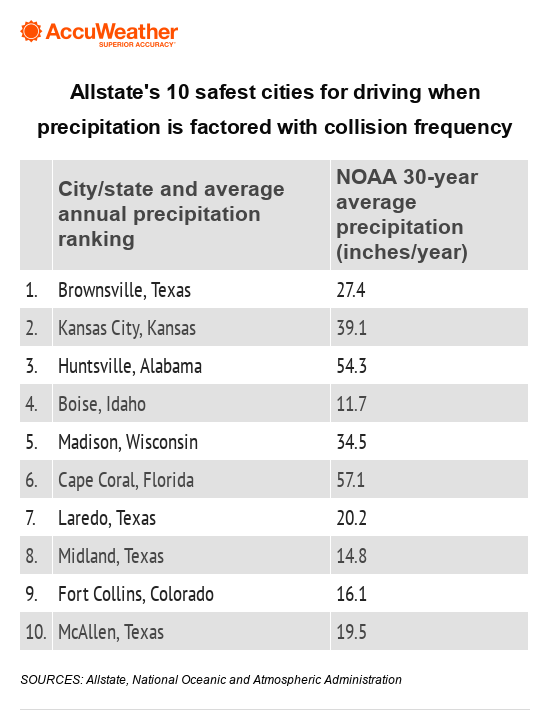 “Even though winter conditions do generate their share of accidents, rainy conditions are more common in many areas, and drivers can be less cautious than they might be with winter conditions,” Rosen said, noting that the vast majority of most weather-related crashes happen on wet pavement (70 percent) and during rainfall (46 percent).

A much smaller percentage of weather-related crashes occur during winter conditions, with 18 percent occurring during snow or sleet, 13 percent happening on icy pavement and 16 percent taking place on snowy or slushy pavement, according to the National Highway Traffic Safety Administration (NHTSA).

Drivers should be aware that when driving on rain- or snow-covered roads, making sure there’s adequate time to pump the brakes is essential. “[Our data shows that] the average American driver will experience about 19 hard-braking events for every 1,000 miles driven,” Rosen said.

How to drive safely when roads are covered with snow and ice
Black ice: How to spot this winter driving danger

Among the 200 cities measured and included in the report, Allstate found that drivers in cities with fewer hard-braking events per 1,000 miles also tend to have fewer auto property damage claims, Rosen said.

Braking distance on wet roads increases by 27 percent compared to when stopping on dry road and traveling at 55 mph, according to the NHTSA.

The full rankings of Allstate’s 2018 America’s Best Drivers Report can be viewed here.