A temporary camp has been set up outside a Walmart in Chico, California on Nov. 16. Thousands of people are seeking shelter after losing their homes to the Camp Fire. According to local media, these campers are being asked to leave by Sunday, Nov. 18.

As firefighters battle the deadly California wildfires, rain is expected to significantly aid the fight later this week. New dangers, however, may arise for residents and rescue crews.

Officials estimate that the full containment date for the Camp Fire is Nov. 30, but upcoming rain may help to douse the fire much sooner. The blaze has claimed at least 79 lives.

As of Monday night, firefighters have contained 70 percent of the 151,272-acre Camp Fire. Containment of the Woolsey Fire in Southern California was 96 percent with an anticipated full containment date of Nov. 22.

All eyes are on the prospect of rain later in the week, but there can be a few localized challenges beforehand.

"The pattern will change very little through Tuesday across California," according to AccuWeather Senior Meteorologist Mike Doll. "Unfortunately, this means areas that have been experiencing smoky conditions and unhealthy air quality will continue to do so until a change in the weather occurs."

The weather will finally turn more in favor of the firefighters as rain sweeps into California starting on Wednesday. 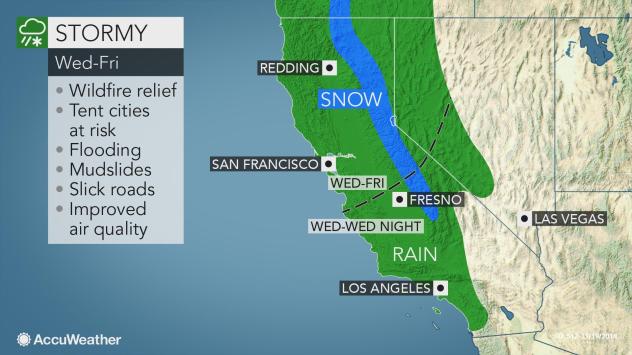 However, gusty winds may get kicked up as the storm rolls in and cause erratic fire behavior prior to any dousing rain. Roads can also turn slick as the rain initially falls.

Additional rounds of rain are expected in Northern California Thursday and Friday, according to Doll.

Each round of rain will be accompanied by snow in the Sierra Nevada. While being a boon for the ski industry, the snow can create treacherous conditions in the passes (including I-80's Donner Summit).

Many residents will likely trade the concern for holiday travel disruptions for the wildfire relief.

"The rain mid- to late week will greatly aid crews battling the Camp Fire," according to Doll. "The negative is rain can be heavy enough to cause flooding with a risk of mudslides and debris flows in the burn areas."

Download the free AccuWeather app to know when rain is anticipated in your community.

The slope of the terrain around most of where the Camp Fire has burned is not overly steep, which can limit significant debris flows like what can occur in the more mountainous burn scar areas of the Ferguson and Mendocino Complex fires.

While officials are working to move victims to more secure shelters, anyone still living in tents around the charred wreckage of Paradise and the surrounding areas will need to prepare for rounds of soaking rain and cooler weather. Highs later in the week can be held to the 50s.

Be sure not to have tents located in low-lying and poor drainage areas, which can flood during heavy rain. People should be sure to avoid having tents or campers below a burn area.

"Southern California will get in on the rain as well at midweek but is not expected to receive as much as central and Northern California," according to Doll. 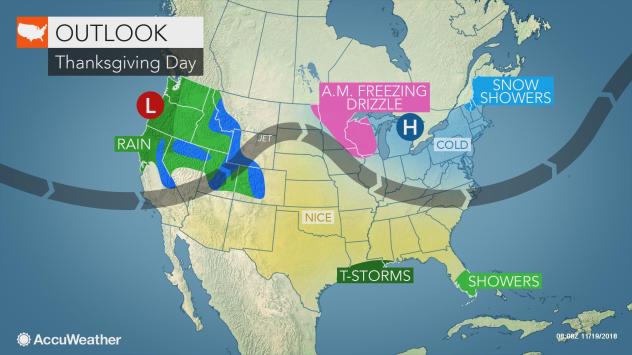 While the risk will not be as great as to the north, residents should still remain vigilant for localized flooding and mudslides in the burn areas of Southern California.

Air quality improvement can expand much farther from the fire areas as the stormy weather takes hold.

Periods of heavy rain are known to "wash out" the atmosphere of pollutants and smoke, she stated.

"Gusty onshore winds moving into Northern California at the end of the week will be another factor in air quality improvement as cleaner ocean air pushes into the Central Valley," according to Eherts.

Said Dr. Joel N. Myers, founder and president of AccuWeather, "This is a serious humanitarian as well as economic disaster for the state of California, possibly rivaling the negative impacts of the great earthquakes there. At this point, AccuWeather estimates that the total damage and economic impact of the California wildfires has already exceeded $80 billion and will likely exceed $150 billion and possibly reach $200 billion this week based on AccuWeather forecast conditions of strong winds and very little rain combined with very dry grounds and vegetation aggravated by lack of rain and strong parched winds."

"This dramatic economic loss will cause substantial damage to California’s economy with repercussions to its annual budget potentially resulting ultimately in increased taxes. Deteriorating economic conditions brought on by the negative economic impact of the fires coming on the heels of last year's losses will stress the state’s budget possibly causing the state’s credit to deteriorate which, if it occurs, will result in lower bond ratings and higher interest rates with the snowball effect to greater deficits and more expenses," Myers said.