A heat wave roasted the northeastern United States this weekend with temperatures that felt like the triple digits.

"While this has not been the most extreme heat with the vast majority of locations falling just shy of record temps, anytime we get temperatures this high with increased humidity, we should be aware of how hard our bodies work to keep us cool," said AccuWeather Meteorologist Randy Adkins.

Anyone spending significant amounts of time outdoors should drink plenty of fluids and take frequent breaks, especially if they’re in the sun at all.

This is particularly true for young children, the elderly and those with chronic respiratory ailments, Adkins said.

"Temperatures will remain above average through the end of the upcoming week for most in the mid-Atlantic and Northeast, and while it will not be as hot as it was this past weekend, those precautionary statements apply," Adkins said. 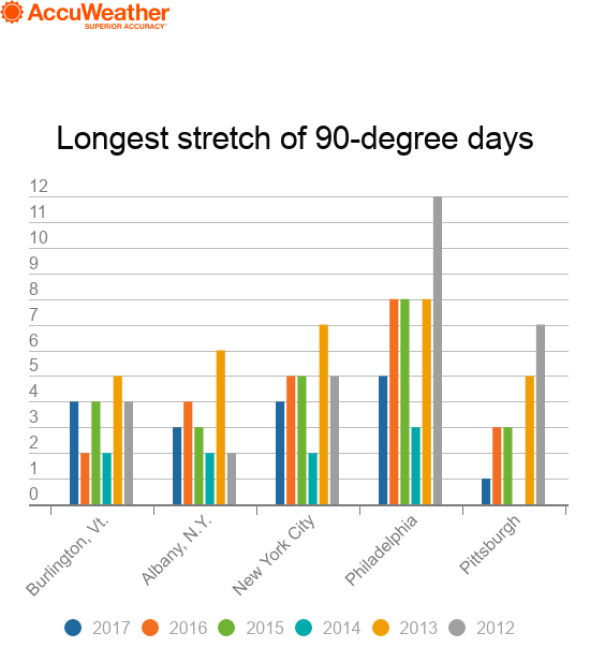 Record-challenging temperatures were felt across a majority of the Northeast on Sunday, including several bigger cities.

Allentown, Pennsylvania, was one of the hottest spots in the region, where the temperature reached a blistering 98 degrees Fahrenheit with a maximum AccuWeather RealFeel® Temperature of 105 F.

Although New York City did not set a record high temperature, the AccuWeather RealFeel® Temperature remained over 100 F for over six hours.

‘Relentless’ heat wave to grip northeastern US into July 4 Sweltering summer heat wave to take aim at Midwest into Sunday Heat exhaustion vs. heatstroke: What are the warning signs and how should you react?

AccuWeather RealFeel® Temperatures also approached 100 F in Chicago, causing a bridge to fail. A sailboat wasn't able to pass, so firetrucks and a boat cooled down the bridge with water.

Bridge was stuck. Sailboat couldn’t get through. So they brought out the fire truck and boat to cool it off. Pretty cool sight. pic.twitter.com/G02ZH1WcqB 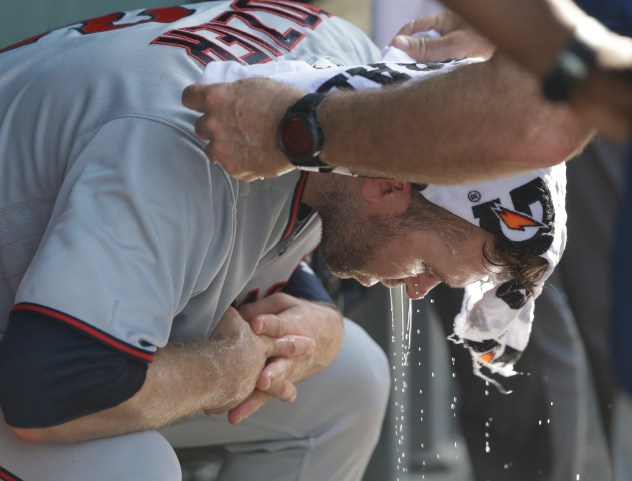 Minnesota Twins' Brian Dozier has a cold wet towel applied to his head during the seventh inning of a baseball game Chicago Cubs Saturday, June 30, 2018, in Chicago. Temperatures at Wrigley Field climbed into the mid 90's with a heat index over 100 degrees. (AP Photo/Charles Rex Arbogast)

BREAKING: Highway 3 at TWO locations is buckling due to extreme heat.

🆕 A number of East Coast tracks have canceled cards due to extreme heat. Here's the latest: https://t.co/0IA2BUhcDJ pic.twitter.com/O9cq8Nt7zf

A Heat Health Emergency is now in effect. Very hot weather can make it harder for you to cool down. Stay hydrated, slow down, and check on neighbors: https://t.co/vzuGI1XMRL #PHLheat

Yeah, it's summer, and summer is hot; but heat can be dangerous. HEAT KILLS more people each year than any other weather hazard, including tornadoes,lightning, & floods. You take precautions for those. Give heat the same consideration during this #heatWavehttps://t.co/asAP108BNk pic.twitter.com/2XlPgc2w3Y