Most people planning a marriage proposal want good weather. Not AccuWeather Meteorologist Tom Bedard. He was hoping for a tornado.

Bedard had been meticulously planning the ultimate marriage proposal to girlfriend and fellow meteorologist at AccuWeather, Raya Maday, for months. All he needed was a tornado.

Considering both are meteorologists who like to storm chase in their spare time, and that Maday happens to be a forecaster who specializes in severe weather, tracking a tornado didn't seem to be out of the question.

Bedard and Maday met at an annual American Meteorological Society event in New Orleans in 2016. Shortly thereafter, both were hired to work at AccuWeather in the company's Wichita, Kansas, office at the same time and they say it's been a fantastic couple of years together.

"We've always been pretty heavily connected in the weather community," Maday said. "Even from the day we met." 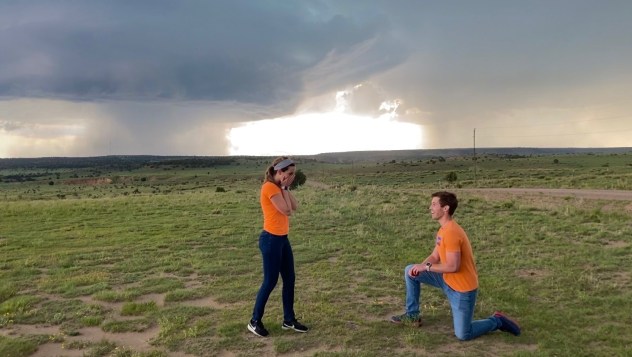 On the Saturday of Memorial Day weekend, the couple hit the road to storm chase on a slight-risk day, meteorologist parlance for a day on which the NOAA Storm Prediction Center has issued a forecast for severe weather on level of 2 out of 5, with five 5 being the highest. Inside the bounds of a slight risk, tornadoes are possible but not guaranteed.

They were joined by friends who were in on the proposal plan. Unbeknownst to Maday, Bedard was carrying an engagement ring and was ready to get down on one knee to pop the question -- should the weather conditions be just right.

"We were ready for just about every circumstance. The only one I was worried about was not having a storm initiate," Bedard told AccuWeather. "We had already driven so far. I was already anxious about taking us all the way to southeast Colorado on a slight-risk day and coming back without putting a ring on her finger ... I thought 'Oh God, no, we're going to do all this travel for nothing.'" 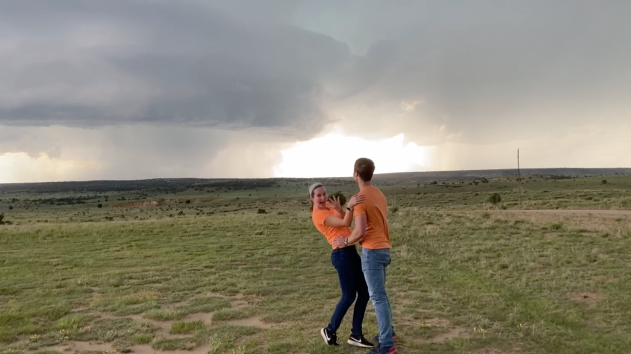 Interestingly, it was Maday's skills as a forecaster that ultimately got them to the right spot for a proposal she knew nothing about.

"She's incredible. She knew what she was doing and she and Rich (the friend who was there to be the videographer) put us in the right spot. We stuck around and eventually got a touchdown at three or four o'clock." Bedard said. "We were in this incredible canyonlike natural landscape. I couldn't have asked for a better opportunity."

So, with Rich behind the camera recording, and as lightning flashed and the tornado swirled, Bedard went for it. As Maday later said, "When the tornado touched down, so did his left knee." 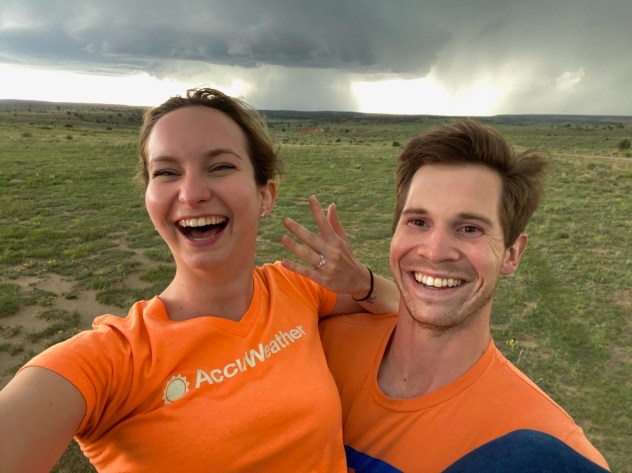 "The utter shock, I still can't even imagine that it was real life, it feels so unrealistic that it even happened...It feels so unreal," Maday told AccuWeather. "In no measure would I ever expect something like this to happen. Like, 'Wouldn't it be funny if Tom proposed in front of our first tornado.' Not gonna happen. Never gonna happen. But it somehow happened," she said. "It was just so absolutely unexpected."

Immediately after she said yes the couple had to run to the car, not just because of the tornado but the lightning was flashing all around them.

"It was a moment that I don't think I will ever forget," Maday told AccuWeather. 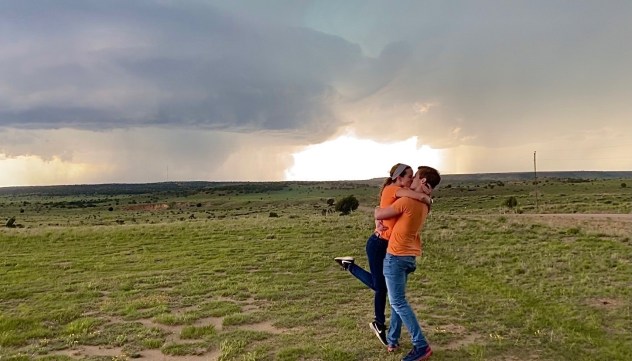 Bedard agreed, saying, "If anybody is trying to replicate that proposal, work with a good meteorologist and be really, really safe."

The couple hasn't set a date for the wedding yet, but both are thinking tornado season in Tornado Alley would make for a pretty incredible location. "More than likely, we're probably going to see another tornado when we get married," Bedard said. "I just hope it stays far enough from the venue or anyone's town, community or wheat fields!"

"Or just close enough that we could also bring a photographer and get some really awesome shots. I would be cool with that," Maday added, laughing. "I'm always down for a tornado intercept, even if it's during our wedding day."

55-gallon drum inspired ‘character’ in one of all-time great weather movies
How one pioneer earned the nickname ‘Mr. Tornado’
Reed Timmer on getting ‘thisclose’ to a monster tornado