This new species of waterlily pad is so large, humans could probably even walk on them. Buzz60’s Tony Spitz has the details.

July 4 (UPI) -- A massive waterlily that has been grown at the Royal Botanic Gardens at Kew in London for 177 years has been proven to be a newly identified species, researchers said Monday.

Scientists with Kew Gardens identified the species as Victoria boliviana after nearly two centuries of confusing it with Victoria amazonica, according to a Royal Botanic Gardens article on the discovery.

The giant waterlily, which can grow more than 10 feet wide and support around 176 pounds of weight, is now considered the largest waterlily species in the world. It is native to Bolivia and the largest known specimen of the species is found at the La Rinconada Gardens in the South American country. 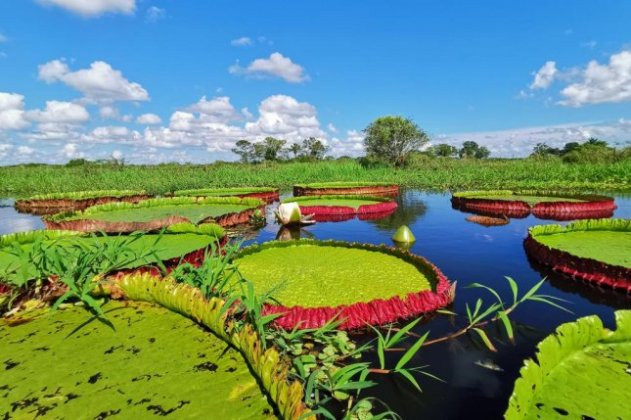 The newly identified species, Victoria boliviana, is pictured in the wild in Bolivia.

Carlos Magdalena, a senior botanical horticulturist with the organization, had long suspected that there was a third species in the Victoria genus along with V. amazonica and Victoria cruziana after seeing a photograph of the plant at Kew Gardens.

"It was clear to me that this plant did not quite fit the description of either of the known Victoria species and therefore it had to be a third," Magdalena said in a press release.

"For almost two decades, I have been scrutinizing every single picture of wild Victoria waterlilies over the Internet, a luxury that a botanist from the 18th, 19th and most of the 20th century didn't have."

Madalena reached out to gardens in Bolivia and in 2016 began receiving donations of seeds from the suspected third species from the Santa Cruz de La Sierra Botanic Garden and the La Rinconada Gardens.

Supported by an international team of researchers, scientists at Kew Gardens then grew the seeds from the Bolivian samples and compared them with existing information on giant waterlilies by analyzing a variety of their characteristics through historical data records and DNA analysis.

Researchers said that V. boliviania is distinct from the other two species in the genus because it has a different distribution of prickles and seed shape as well as a "very genetically different" makeup.

The scientific team established the new species in a study published in the journal Frontiers in Plant science.

They said they began the research to "revisit species delimitation" in the Victoria genus and establish species hypotheses.

There were difficulties in previously identifying a new genus due in part to the fact that "Victoria is notoriously difficult to make herbarium specimens from, being big, fleshy, covered in prickles and prone to rotting in the dryer."

It helped that the three species could be grown together at Kew Gardens, a luxury that previous researchers didn't have, Magdalena said.

"Having this new data for Victoria and identifying a new species in the genus is an incredible achievement in botany," added Alex Monro, a senior author of the paper. "Properly identifying and documenting plant diversity is crucial to protecting it and sustainably benefiting from it."