In case you missed it: Destructive tornadoes wreak havoc across eastern US; Officials rescue dozens trapped in Colorado snowstorm

For the second weekend in a row, severe thunderstorms hammered the south-central United States with damaging winds and tornadoes.

Alabama was hit with more severe storm damage just one week after the deadliest tornado outbreak in six years. Damaging tornadoes spawned from Texas through Tennessee on Saturday.

Severe storms cause damage across south-central US

Another tornado outbreak ravaged areas from the Ohio Valley and into the South later in the week.

A tornado just missed hitting the National Weather Service forecast office in West Paducah, Kentucky, during the late-morning hours on Thursday. Tornadoes were also reported in central Alabama and at least one in central Michigan late Thursday afternoon.

The severe weather caused damage from Alabama to Michigan, tearing off roofs and ripping apart other structures. More than 100,000 customers were without power at the height of the storms.

A separate tornado outbreak ensued farther west this week as well, causing damage in New Mexico and parts of Texas.

High winds blasted the Dallas-Fort Worth area, with one gust topping 100 mph.

Two warehouses were heavily damaged near O'Donnell, Texas, due to wind, and a semi-trailer was blown over on Texas State Highway 87. The driver suffered a minor injury.

A Boeing 777 coming in from Istanbul carried 326 passengers and 21 crew members. Ten people were taken to a nearby hospital after the plane landed at 5:35 p.m., according to spokesman Steve Coleman of the Port Authority of New York and New Jersey, who also stated that one person had a broken leg.

Which plastics do and don’t belong in your recycling bin?
Girl, 6, shocked by what she sees after a major snowstorm
These are the last photos NASA’s Opportunity Rover took on Mars

A monster winter storm erupted across the Rockies and central Plains this week.

The storm turned deadly when a Colorado State Patrol corporal was struck and killed by a vehicle while he was outside helping a car that slid off Interstate 76 in Weld County, Colorado.

Hundreds of motorists were stranded around the Colorado Springs area and surrounding interstates. The National Guard was called to assist with rescues. 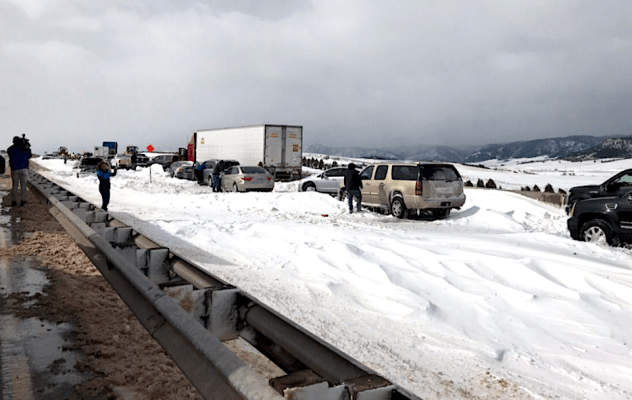 Motorists on I-25 in Colorado were still stranded on Thursday after a monster winter storm brought blizzard conditions to the Rockies and Central Plains on Wednesday. (Douglas County Sheriff's Office)

Airlines canceled almost 2,000 flights and delayed another 2,700 due to the wind and severe weather.

Idai barreled onshore north of Beira, Mozambique, with its strength equivalent to a Category 3 major hurricane in the Atlantic or eastern Pacific oceans.

A child was reportedly struck and killed by storm debris in Manica province, according to Club of Mozambique.

Prior to the cyclone's most recent landfall, Al Jazeera reported that over 100 people were killed by flash flooding across Mozambique and Malawi.

One man was killed due to Storm Eberhard. Police told the Associated Press that a 47-year-old man died when a tree fell on his car in Bestwig, Germany, where winds gusted to 63 mph (102 km/h).

Chaos from the storm extended to the football pitch as snow fell in Hannover on Sunday. Hannover’s Genki Haraguchi shot the ball toward an empty net, but the ball slowed its speed on the snow-covered pitch and stopped just short of the goal line. Hannover went on to lose the Bundesliga match 3-2 to Bayer Leverkusen.