With cold, blustery weather sweeping into the northeastern United States into the weekend, heavy lake-effect snow will lead to treacherous travel around the Great Lakes.

Temperatures have been slashed by 20-30 degrees Fahrenheit when compared to earlier this week from the Midwest to the Northeast.

Gusty winds will further add to the shock value around the Great Lakes by creating dramatically lower AccuWeather RealFeel&reg; Temperatures. 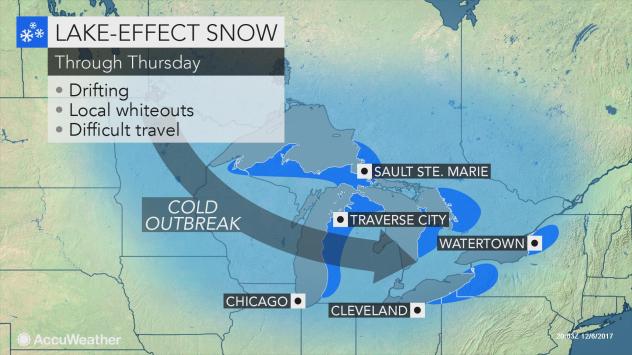 As these cold winds also blow over the relatively milder Great Lakes, lake-effect snow will develop and create treacherous travel downwind of the lakes into Friday morning.

We expect the snow to continue streaming downwind of the eastern lakes into Friday morning, according to AccuWeather Meteorologist Steve Travis.

"Snowfall rates of 1-2 inches per hour can lead to treacherous travel conditions with snow on roads and low visibility," Travis said. 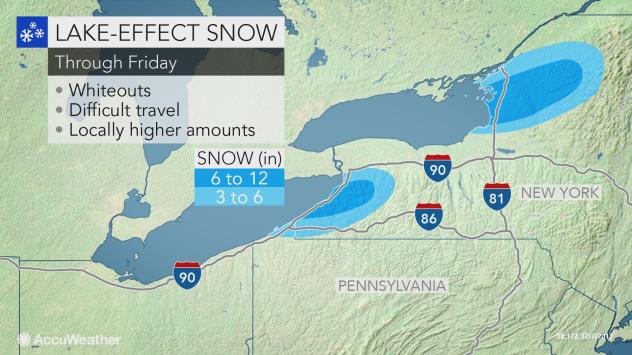 Anyone traveling on Interstates 75, 81, 86 and 90 during this time should drive with extreme caution and take heed of any weather warnings.

Airline passengers, including those with destinations or departures from Buffalo Niagara International Airport, should prepare for flight delays and cancellations.

Even local travel by foot will become perilous as roads and sidewalks turn slippery.

"The snow bands will shift around throughout the duration of the event," Travis said.

Where the bands of snow cross over the same areas often, more than a foot of snow may fall. However, since the ground is relatively warm, some of the snow may melt as it falls or from beneath.

Accumulated snow is expected to be blown around in any squalls, which can lead to local whiteout conditions.

This lake-effect snow event will gradually diminish from west to east on Friday; however, snow showers and squalls may lead to more travel disruptions in many of the same communities less than 24 hours later as an Alberta clipper storm rolls across the Midwest.

"The clipper storm will produce accumulating snow not only near the Great Lakes, but also as far away as the middle Mississippi and Ohio valleys and central Appalachians," according to AccuWeather Senior Meteorologist Alex Sosnowski. 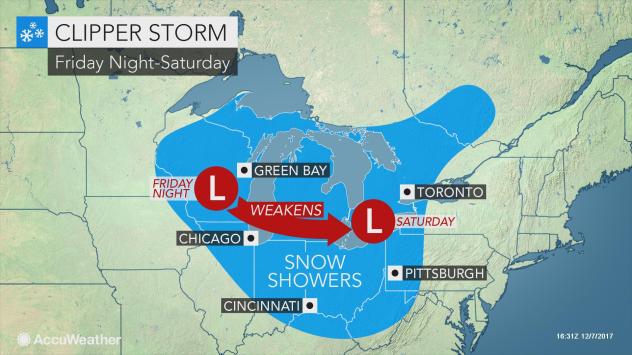 "It is the clipper storm that may lead to airline delays and some slippery road surfaces in Chicago, Detroit, Cleveland and Cincinnati early this weekend," Sosnowski said.

Up to a couple of inches of snow may accumulate from the clipper storm.

An end to this cold, wintry spell of weather for the Great Lakes is not expected in the near future.

"The cold air will support several chances for snow in the Midwest, Ohio Valley and Northeast over the next few weeks," AccuWeather Meteorologist Max Vido said. "While this can provide some seasonal cheer, it may also cause travel disruptions before the holidays."

A storm is forecast to clobber the Atlantic coast with accumulating snow into the first part of this weekend.