Due to the vicious heat wave hitting many parts of the U.S. this weekend, city leaders in Cincinnati are doing their part to keep residents cool. All of the pools operated by the Cincinnati Recreation Commission(with the exception of one) will be open and free to use Friday through Sunday.

Heat has already been blamed for the deaths of at least four people, as well as causing more than 100 residents to evacuate a senior center in New Jersey after air conditioning failed. More lives are in jeopardy with heat advisories stretching from eastern Maryland to eastern North Carolina on Monday.

A woman lost consciousness and died while on a hike in Montgomery County, Maryland Saturday, the Associated Press reported.

"We've been through this situation [with] ConEd time & again & they should have been better prepared—period," Cuomo said on Twitter. He said he was deploying 200 state police officers, 100 generators and 50 light towers to help those affected by the outages.

Most of the outages occurred in Brooklyn. By Monday morning, more than 30,000 customers had been restored, the utility said on Twitter and the remaining outages were expected to be resolved by Monday afternoon.

More than 100 residents were evacuated to a local high school shortly after 3 p.m. EDT on Sunday from a senior center in New Jersey after the building lost power and air conditioning during the extreme heat wave. No injuries have been reported, according to WPVI-TV.

"The temperatures we're seeing in our city [this weekend] could be the highest we've seen in years. Take it seriously," New York City Mayor Bill de Blasio urged his city in Twitter post Saturday afternoon. 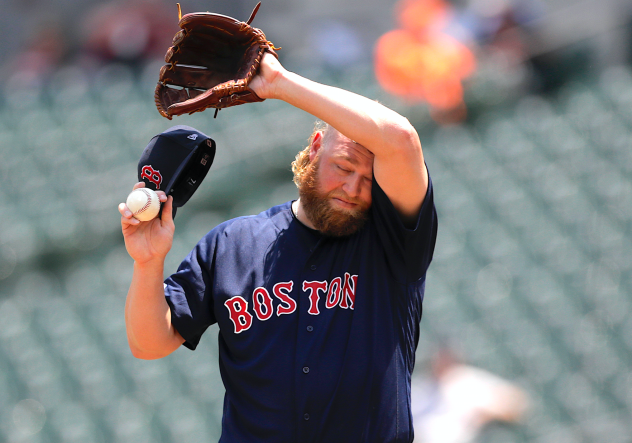 Boston Red Sox starting pitcher Andrew Cashner wipes sweat off his forehead on Sunday in Baltimore, where the National Weather Service says there is an "oppressive and dangerous" heat wave. (AP Photo/Julio Cortez)

Police in Braintree, Massachusetts, asked people to hold off on committing crimes until after the heat wave passes.

“Folks. Due to the extreme heat, we are asking anyone thinking of doing criminal activity to hold off until Monday,” the department wrote in a Facebook post on Friday. The post has gained more than 130,000 shares since Friday.

The sentiments were echoed by the Pelham Police Department in New Hampshire.

"Due to the extreme heat, the Pelham Police Department is officially canceling (sic) all criminal activity for today. It is just too hot to be outside committing crimes. We are asking all aspiring criminals, seasoned veterans, and those who find themselves committing crimes out of boredom, to please stay indoors," the department wrote in a Facebook post late Friday afternoon.

Several locations across the mid-Atlantic reached the 100 F degree mark on Sunday, with several more locations falling a degree short. 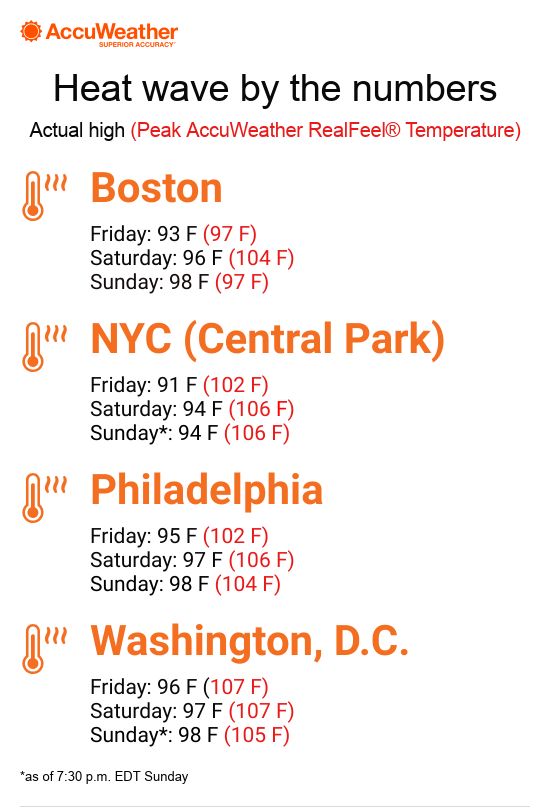 The AccuWeather RealFeel® Temperature at the nearby airport in Nashua, New Hampshire, reached the century mark for the third consecutive day on Sunday.

Widespread triple-digit AccuWeather RealFeel® Temperatures created dangerous conditions for residents and visitors across the mid-Atlantic, including at all of the major cities along the I-95 corridor, before noon EDT on Sunday. 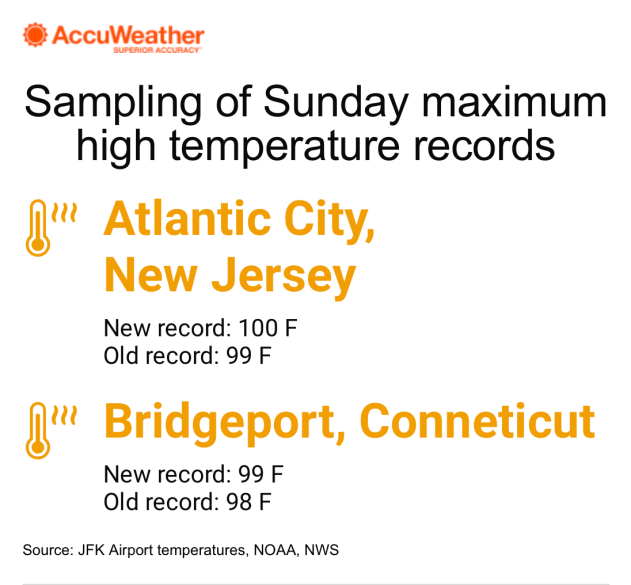 "The actual high of 100 F in Baltimore on Saturday was the city's first triple-digit reading since July 25, 2016," according to AccuWeather Senior Meteorologist Kristina Pydynowski.

"While the heat has been extreme during the daylight hours, the nights have offered no relief," she added.

The "low" temperature in Boston on Sunday morning sat at 83 F. For comparison, the average high for the day is 82 F.

Bradley International Airport in Windsor Locks, Connecticut, reached 100 by 2 p.m. EDT on Sunday. This ended up being the high temperature for the day, falling short of breaking the record high of 101 F for July 21 set back in 1991.

"A westerly wind also sent the heat surging across Massachusetts' Cape Cod on Sunday," Pydynowski said. "Temperatures soared into the lower 90s at Chatham, where a high in the middle 70s is more common this time of year."

From the Northeast to New Mexico, at least seven record high temperatures fell on Saturday. 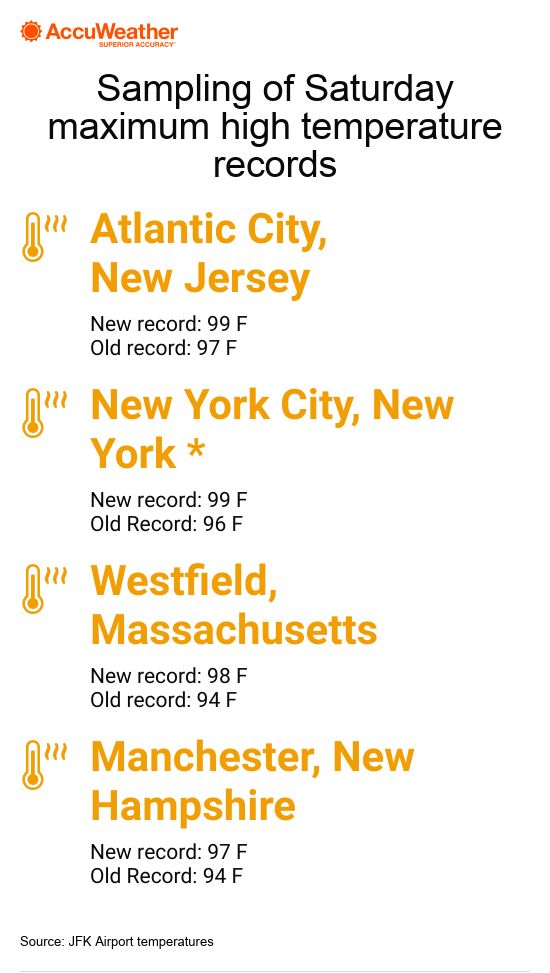 New York's John F. Kennedy International Airport soared to 99 on Saturday, which broke the daily record of 96 set in 2013 and 1991.

A handful of events previously scheduled for the weekend were either canceled or postponed ahead of the heat.

On Thursday evening, the 2019 Verizon New York City Triathlon was canceled due to severe heat warnings and thunderstorm watches in the New York City metro area. There will not be an alternate race weekend. The race had previously been scheduled to take place on Sunday.

Even though the race was canceled, the triathlon and Life Time passed out water bottles and Gatorade at a hydration station.

Ex-NFL player, 32, dies of heat stroke, officials say World just experienced hottest June in 140 years of recordkeeping Hang on, here comes the heat — are energy providers ready? And are you?

Do you know the difference between Heatstroke -- a medical emergency -- and Heat Exhaustion? Here's a guide with downloadable infographics from NOAA's @NWS: https://t.co/ksviBChpGq #HeatHealth #HeatWave pic.twitter.com/u82bKNMnjK

Remember, during hot weather, never leave children and pets unattended in vehicles under any circumstances. Car interiors can reach lethal temperatures very quickly; it takes only two minutes for a car to reach unsafe temperatures. There have already been 21 children who have died this year from being left in a car for an extended period of time. 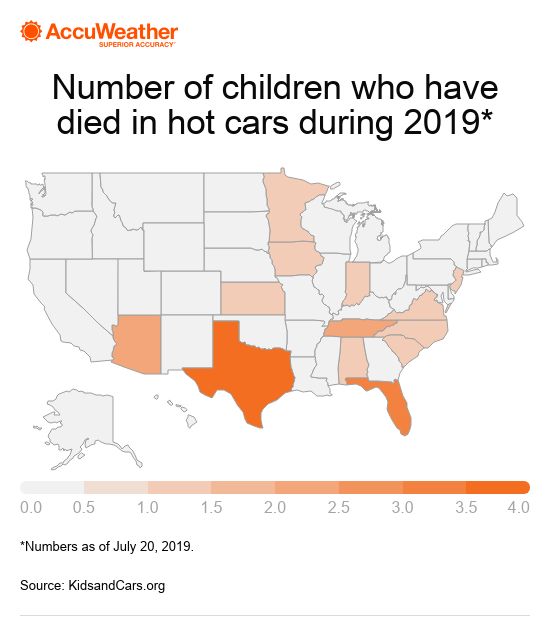 On Thursday, the National Weather Service Office in Omaha, Nebraska, demonstrated how hot cars can get in the summer by baking biscuits on the front dash. After a total of eight hours, the staff had their snack. But it took much less time for the interior to reach a literally baking heat.

"This is a good time to remind everyone that your car does in fact get deadly hot. Look before you lock! On average, 38 children die in hot cars each year. Don't be a statistic!" the service posted with a photo of a thermometer that read 175 degrees F for the surface of the baking pan after staying inside the car for an hour. It took 45 minutes for the dough to start to rise.

"Relief from the oppressive heat wave will gradually sweep over the central U.S. and into the Northeast into early week but will come at the expense of severe thunderstorms and flooding downpours," according to Pydynowski.

Download the free AccuWeather app to stay alert to temperature trends in your community. Keep checking back for updates on AccuWeather.com and stay tuned to the AccuWeather Network on DirecTV, Frontier and Verizon Fios.