AccuWeather predicts an economic impact of $290 billion from Harvey and Irma combined amid a destructive and costly hurricane season.

"We believe the damage estimate from Irma to be about $100 billion, among the costliest hurricanes of all time. This amounts to 0.5 of a percentage point of the GDP of $19 trillion," AccuWeather Founder, President and Chairman Dr. Joel N. Myers said. 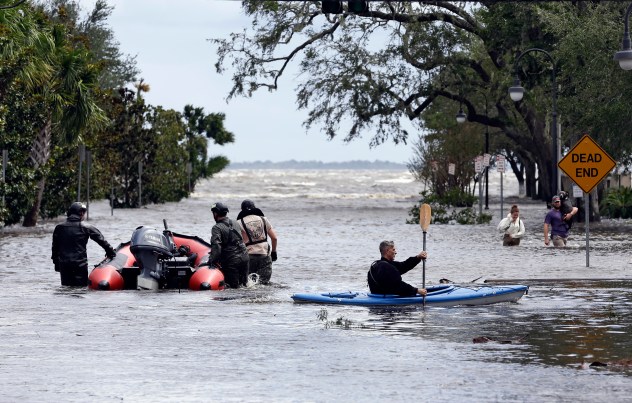 Rescue workers, left, search a neighborhood for flood victims as a man on a kayak down the street after Hurricane Irma brought floodwaters to Jacksonville, Fla. Monday, Sept. 11, 2017. (AP Photo/John Raoux)

"We estimated that Hurricane Harvey is to be the costliest weather disaster in U.S. history at $190 billion or one full percentage point of the GDP. Together, AccuWeather predicts these two disasters amount to 1.5 of a percentage point of the GDP, which will about equal and therefore counter the natural growth of the economy for the period of mid-August through the end of the fourth quarter," Myers added.

Economic costs are incurred by, but not limited to, the following:

The massive size of Irma combined with its slow movement caused hurricane-force wind gusts to occur over a time period of 12 or more hours across a large swath of Florida. The result of the fierce winds was a record number of power outages in Florida.

"Hurricane Irma represents the greatest loss of power in the modern era due to the weather with more than 20 million people affected in the U.S. and another 15 million in the Caribbean," Myers said.

Besides river flooding in central and northeastern portions of Florida, AccuWeather predicts that Irma no longer poses any severe weather threats in the U.S.

As many recover from Harvey and Irma, AccuWeather will continue to monitor the tropics.

At this time, Hurricane Jose appears as though it will not pose a threat to the U.S. AccuWeather meteorologists will closely examine any changes in Jose's track, since it is still looping around the Atlantic.

AccuWeather's Hurricane Center Hurricane Jose to stir East Coast surf into next week; Where will it track? Photos: Hurricane Irma thrashes Florida with destructive wind, storm surge from coast to coast Heat, humidity and ongoing flooding to add to misery as Floridians recover from Irma’s wrath Before and after Hurricane Irma: NASA images reveal sheer devastation in Caribbean

"While we appear to be experiencing a respite to hurricane activity, AccuWeather cautions we are only at the midpoint of hurricane season and reminds those living in hurricane-prone areas that Hurricane Sandy struck in late October of 2012," Myers said.

The Atlantic hurricane season officially begins on June 1 and ends on Nov. 30. The typical peak in tropical activity occurs on Sept. 10.

Stay on top of breaking weather news and critical information to save lives and protect property by checking AccuWeather.com and downloading the AccuWeather app on mobile or smart device.

"AccuWeather takes our responsibility of providing the most accurate forecasts and warnings and the impact on people and business very seriously. This is a solemn responsibility that we have and our people are working extremely hard and with great intensity to make sure that all the people we reach can depend on our info for the utmost in reliability so they can make the right decisions during these stressful times. We also take great pride in the fact that we were the first to warn of the magnitude of both Harvey and Irma and have been out ahead of other sources on both so people know they can get the latest and best info from the AccuWeather app and our website. We thank those who put trust in AccuWeather forecasts and warnings and are gratified by the countless notes of thanks we are receiving from our customers and users in the affected areas," Myers said.