Extremes of flooding rain vs. drought to persist over north-central US into August

While the north-central United States will get a break from storms in some locations and heat in others this weekend, the pattern will resume as July ends and August begins.

A forecast push of dry air for the Midwest and slightly cooler conditions for the northern Plains will come and go.

"The pattern of extremes has been very persistent so far this summer and is likely to continue well into August," according to AccuWeather Long-Range Meteorologist Mike Doll. 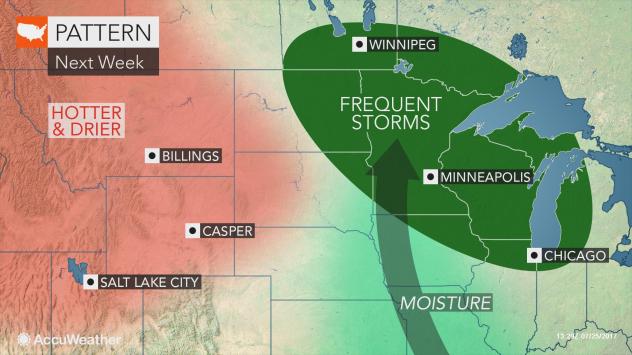 A large dome of heat is forecast to build over the western U.S. next week. Part of that heat dome will extend across the northern High Plains and southwestern Canada.

Meanwhile, a flow of moisture from the Gulf of Mexico will resume over the Mississippi and Ohio valleys, as a new crop of storms from northwestern Canada rolls southeastward next week.

So much rain has been falling so often that many streams and rivers are running well above average for the middle of the summer from portions of eastern Minnesota to Wisconsin, Ohio, northern Illinois and northern Michigan.

As of Wednesday, July 26, rainfall in Chicago and Columbus, Ohio, for July has been two times that of normal with 7.65 and 8.16 inches, respectively. 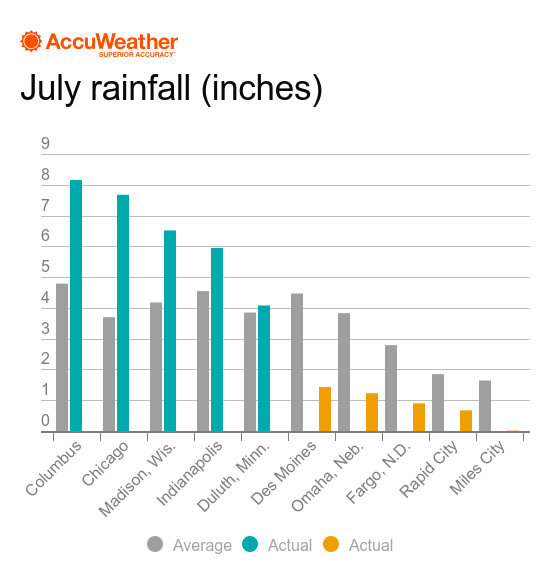 A few pockets of abnormally dry conditions have been intertwined among saturated areas around the Great Lakes.

Storms will continue into Thursday and then resume later this weekend. The rainfall will cause a new surge of water on area streams and rivers from Minnesota to Ohio.

"Rain will reach some needy areas of the lower parts of the northern and central Plains, while other locations will be missed during the upcoming pattern," according to AccuWeather Lead Long-Range Meteorologist Paul Pastelok.

From much of the central and western portions of the Dakotas and Nebraska to much of Montana and Wyoming, the Palmer Drought Severity Index indicates severe to extreme conditions, as of July 22.

Miles City, Montana, has received only a little over an inch of rain since May 1. Average rainfall for the location from May to the end of July is 6 inches. As of July 25, no measurable rain has fallen on the city since July 1.

The dry soil and intense sunshine have been boosting temperatures to well above average over the northern High Plains this summer. Temperatures for the period are running between 3 and 6 degrees Fahrenheit above average since June 1.

AccuWeather Severe Weather Center: Heat, flood and fire advisories
Unseasonable heat to surge across part of western US into early August
Is your water bottle the perfect host for germs?

On multiple days, highs have been at or above 100 in the Dakotas, Montana, Nebraska, Kansas, Missouri and Wyoming during July.

The drought and heat are taking its toll on the spring wheat crop in the region, Pastelok stated.

There is some hope that storms from the Pacific Ocean will take a more southerly path into the northern Rockies and northern High Plains as August progresses. Even if this occurs, the storms may fail to tap into the moisture supply from the Gulf of Mexico farther to the east.

Some sporadic rainfall may develop but not enough to have a big impact on the pattern.

"It would take a major storm or a series of major storms to break the drought, and we just don't see that happening that far west through most of August," Pastelok said.

The outlook appears grim for the spring wheat in the area and the quality of other crops, such as soybeans and corn, in part of the drought area may suffer.