Dangerous storms to threaten central US with wind, hail and tornadoes this week

This spring's first prolonged, multi-day stretch of dangerous severe storms in the central and southern Plains will continue to unfold through Wednesday.

It will be important for residents and people traveling in areas from Texas to Iowa to prepare for the effects of destructive thunderstorms through Wednesday, including obtaining a working weather radio; setting up severe alerts on a charged cell phone; securing outdoor objects; knowing where to find a safe place at home, school and in the workplace; and making sure to stay up to date on local watches and warnings.

The first round of severe storms ignited on Monday afternoon with isolated storms from western Texas through central Nebraska.

The threat of severe weather will shift eastward on Tuesday, focusing on portions of eastern and southern Nebraska, Kansas, northern Missouri and much of Iowa.

"Large hail, damaging winds and tornadoes will be the main threats with these storms," said AccuWeather Meteorologist Brett Rathbun. 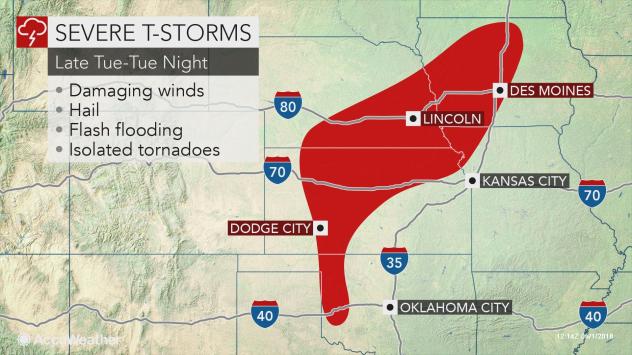 Any storms could produce wind gusts up to 70 mph, in addition to large hail and several inches of rainfall in a short period of time.

Whiles a few storms are likely during the early and middle part of the afternoon, the bulk of the severe weather is not likely until after 4 p.m. local time on Tuesday.

Residents in Omaha, Nebraska; Des Moines, Iowa; and Kansas City will be under the threat of severe weather, including a heightened threat of urban flooding.

Anyone traveling through this area on Interstates 90, 80, 70 and 35 should avoid traveling through any storms and seek shelter in a sturdy building if threatening weather approaches. Flooded areas should be avoided in the aftermath of the storms, as well.

Rathbun elaborated that a more isolated severe threat will be present farther south across Oklahoma and Texas.

"Hail will be the primary threat with the storms farther south, although locally damaging winds and flash flooding will also be a concern," he said.

Conditions will again be prime for severe weather across many of the same places on Wednesday, in addition to a wide swath of the central and southern Plains.

"The severe threat each day this week will largely depend on the effect of lingering clouds and thunderstorms from leftover complexes of thunderstorms the previous night," Rathbun said.

Regardless, anyone who experiences severe weather on Tuesday should prepare for a similar threat on Wednesday. 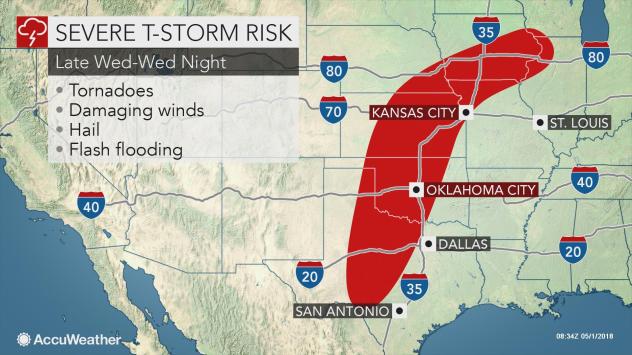 Heat surging into the southern Plains at midweek will fuel the year's first round of widespread severe weather, making "Wednesday the most likely day in which Oklahoma could receive its first tornado of the 2018 season," Rathbun said.

It will be imperative for everyone in the affected area to stay up to date on local watches and warnings and to take the proper precautions when severe weather threatens.

Similar to Tuesday, the severe weather risk on Wednesday will not likely ramp up until after 4 p.m. local time and may continue through the evening.

The risk for severe weather will shift eastward and is forecast to extend from Texas to the lower Great Lakes region on Thursday.