Temperatures will snap from record-breaking to frost-inducing by the end of week.

As cooler air settles over the Northeast into the weekend, some areas will go from experiencing record heat to the first frost of the season in the span of just a few days.

Summer's last hurrah left its mark in the record books across the region during the first two days of October. Baltimore, Washington, D.C., and New York City are among the cities that experienced their hottest October days on record at midweek, as temperatures soared into the middle and upper 90s F.

"When comparing highs from the peak of the heat early this week to the late-night and early-morning lows this weekend, some locations will experience a 50-degree-Fahrenheit swing," AccuWeather Senior Meteorologist Alex Sosnowski said.

The main surge of crisp, fall air has arrived in the wake of a fast-moving storm system that brought rain and thunderstorms on Thursday.

As the sky remains clear and winds diminish Friday night, temperatures are expected to plummet to their lowest levels yet this season.

Temperatures are forecast to dip well down into the 20s F across the northern tier and to near the 32-degree Fahrenheit mark over the valleys of the central Appalachians and parts of southern interior New England by Saturday morning.

"Most outlying areas located north and west of the major metro areas will have a pretty decent chance of getting the season's first frost early Saturday morning," AccuWeather Senior Meteorologist Carl Babinski said. 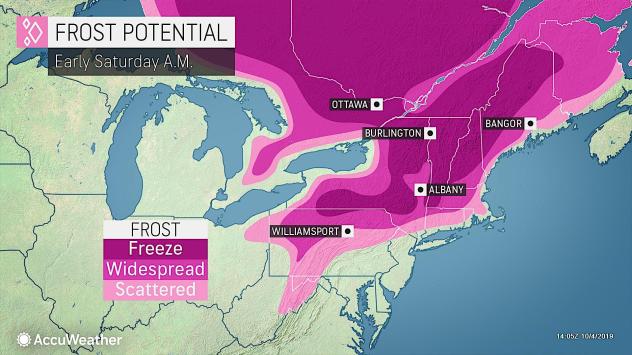 The colder weather should help to reduce the bug population and pollen levels in the region, according to Sosnowski.

People heading out on Saturday morning to go to college football tailgates, leaf peep or pick out pumpkins will need to layer up.

Saturday should be fairly sunny, but also the coolest day of the two this weekend, with temperatures snapping back up on Sunday, according to Babinski.

Highs are forecast to return to the 60s in western New England and 70s in the lower mid-Atlantic on Sunday following respective highs in the 50s and 60s at the start of the weekend.

Accompanying the temperature rebound at the end of the weekend will be the return of rain as a new storm approaches. 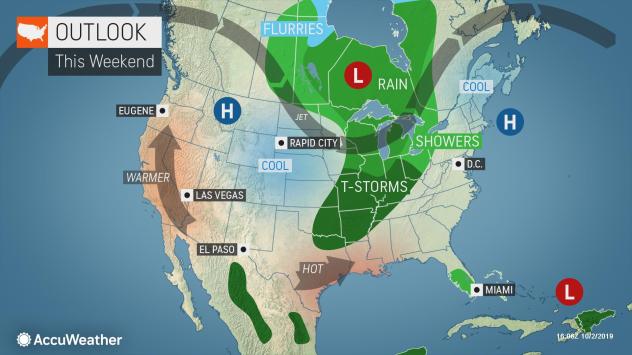 Fans heading to Sunday's AFC North rivalry game between the Pittsburgh Steelers and Baltimore Ravens at Heinz Field will want to bring along a poncho or umbrella with showers possible throughout the day.

AccuWeather meteorologists are monitoring the potential for the region to receive a thorough soaking from this storm later Sunday through Monday, depending on the storm's exact speed and whether tropical moisture comes into play. 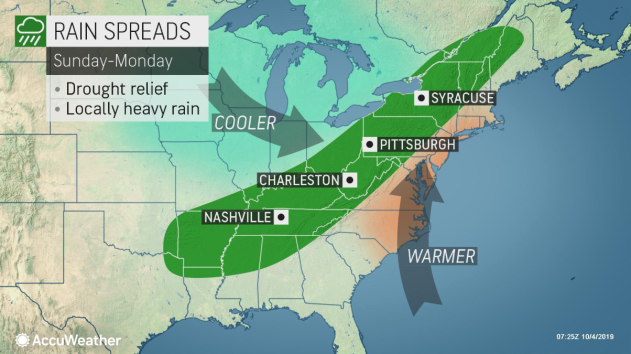 Regardless, any rain will be of benefit as abnormally dry to moderate drought conditions have expanded across the region in recent weeks.

Another cool, dry and frosty spell is likely to follow this round of wet weather by the middle of next week.

Download the free AccuWeather app to receive the latest forecast for your area. Keep checking back for updates on AccuWeather.com and stay tuned to the AccuWeather Network on DirecTV, Frontier and Verizon Fios.