Another Arctic blast poised to usher in 2018

You will be redirected to the latest story on the cold blast.

Brutally cold weather will soon be refreshed as another blast of Arctic air prepares to dive through the central and eastern United States.

The new frigid blast will reach the northern Plains on Saturday, then sweep southeastward over the balance of the New Year's Day weekend.

Temperatures in Minneapolis are forecast to fail to exceed zero F on Saturday and Sunday.

“Bitterly cold arctic air will settle in across a large swath of the U.S. as we turn the calendar from 2017 to 2018,” said AccuWeather Senior Meteorologist Dan Pydynowski. 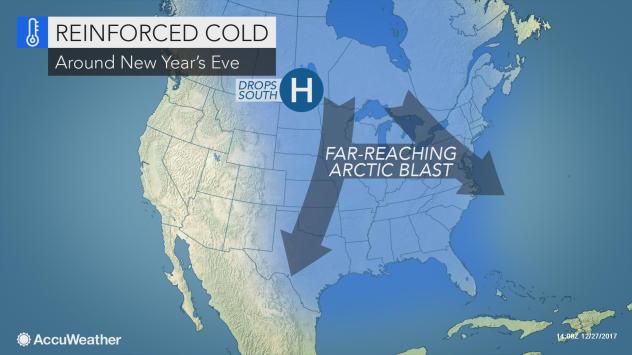 “People will really need to bundle up if they are heading out Sunday night for New Year's Eve celebrations in places like Chicago, for example, where the high will be around 15 F on Sunday, around 15 degrees below normal,” he warned.

Cities as far south as Nashville and Little Rock, Arkansas, will experience temperatures more than 20 degrees Fahrenheit below average by the end of the weekend. Temperatures will be no higher than the 20s at both locations on Sunday and New Year's Day.

How to avoid freezing if you’re ringing in the new year in Times Square
Snow to create slippery travel in midwestern US into Friday night
Quick-hitting snowfall to sweep northeastern US prior to New Year’s Eve
Photos: Record-breaking 60-inch snowfall blankets Erie, Pennsylvania

Frigid weather is expected to reach the Big Apple just in time to chill those visiting Times Square, though the record low of minus 4 F from 1918 will not be challenged.

Temperatures will be in the lower teens as the ball drops in Midtown Manhattan on Sunday night. At that level the temperature may be within the top two lowest since records have been maintained in the 1800s. 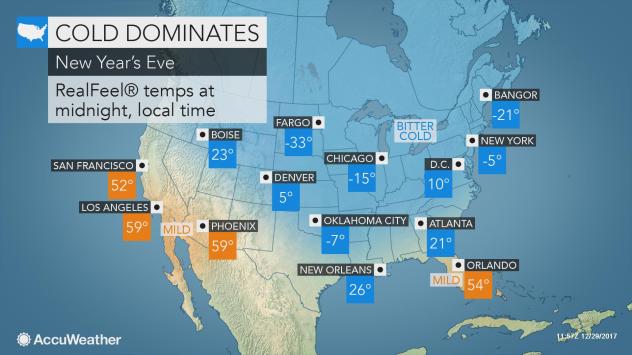 These conditions will be dangerously cold, especially for those spending many hours outdoors overnight across the majority of the eastern two-thirds of the country.

Consuming alcoholic beverages increases the risk of hypothermia, if not alert and properly dressed, according to the Mayo Clinic.

In Atlanta, it will be the coldest New Year's Eve since welcoming in 2010, when the temperature bottomed out at 29. Temperatures may hover in the upper 20s to lower 30s at the very start of 2018.

If the temperature fails to top 5 degrees, Chicago may tie the coldest high temperature for any New Year's Day. The only time this occurred was in 1969. That morning brought a record low of 10 degrees below zero.

“People will need to bundle up with all their winter gear in order to stay warm,” said Pydynowski.

Hypothermia: How to spot and prevent this cold weather danger
Why your blood pressure can spike when it’s cold outside
How to prevent flare-ups of asthma triggered by cold weather
5 ways your body combats cold weather’s harsh impacts
Constantly cold? These 5 medical conditions might be behind your persistent chill
Report a Typo