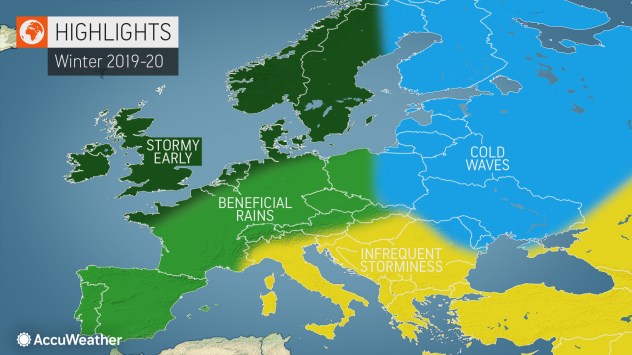 AccuWeather's annual Europe winter forecast is out, and long-range forecasters are predicting that the worst of the season's windstorms will arrive early in the British Isles, Scandinavia and northern Europe.

Meanwhile, countries from Italy through the Balkans are likely to experience a tranquil winter with long spells of dry weather. And will the Beast from the East make an appearance this winter?

Take a look below at a complete region-by-region breakdown.

An active start to the windstorm season is in the forecast for the British Isles, northern Europe and into Scandinavia this winter.

Several storms have already hit the regions this year, including Lorenzo, which was at one point a Category 5 hurricane over the Atlantic Ocean.

However, the frequency of the storms will not reach its climax until the calendar turns to 2020.

“Through early January is going to be the most active,” AccuWeather Meteorologist Tyler Roys said.

Storms that hit in quick succession could pose a heightened risk for wind damage and flooding as people will not have much time to recover. 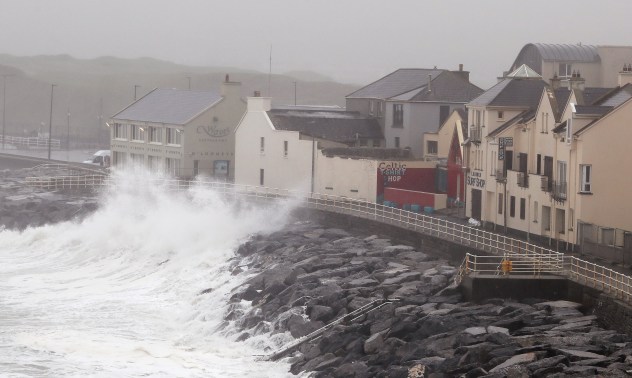 Waves crash agains the sea wall in Lahinch, County Clare, on the West Coast of Ireland as thousands of homes and businesses have been left without power as Storm Lorenzo passed across Ireland. (Photo/ Reuters/Brian Lawless)

Following an active weather pattern early in the winter, the frequency of windstorms will decrease heading into February and March.

“The second half of winter could be largely on the quiet side in regards to storminess,” Roys said.

This may open the door for cold shots to chill the British Isles, but it won't be a repeat of two winters ago when the Beast from the East roared in, according to AccuWeather meteorologists.

Wet spells to ease drought concerns from Portugal to Poland

While windstorms lash the northern shores of Europe, rain and snow to the south could be beneficial for areas experiencing drought.

The region will not be wet the entire winter, but spells of precipitation will help ease drought conditions and allow river levels to rise from their unusually low levels.

“The Rhine River again had low water levels during the second half of summer and so far through the autumn which has impacted both shipping and traveling along the river,” Roys said. “Restrictions have been put in place again, which in turn altered cruise trips along the river.”

At Spain’s Valdecañas Reservoir, the persistent dry weather has caused the water level to drop, revealing a 4,000-year-old ‘Stonehenge’ that is usually hidden by the water.

"Though there will be relief from the drought in the Iberian Peninsula, and rainfall will produce more vegetation growth, leading to an increased threat for wildfires as it dries out into the spring," AccuWeather Senior Meteorologist Alan Reppert said. 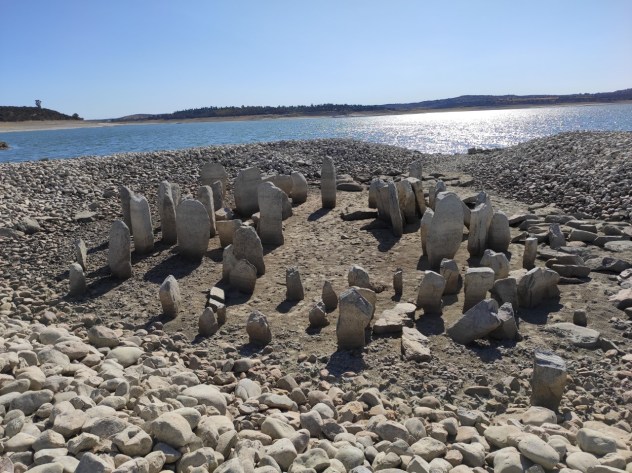 Due to the low water level of the Valdecañas Reservoir, the Doldal de Guadalperal is fully visible. (Photo/Wikimedia Commons)

Not only will the rounds of precipitation help to ease drought concerns, but it will also deliver plenty of snow to the northern Alps.

Last year, the northern Alps had an early start to the snow season, according to Roys, and this year may be a repeat of that.

This is good news for ski resorts across the region.

While storms unleash wind-whipped rain, rough seas and mountain snow across much of Europe, a fairly tranquil winter is expected to unfold across the Balkan Peninsula.

“[They’re] still going to get storms, but it won’t be like last year,” International Forecasting Manager Jason Nicholls said.

Instead, the storms will be separated by periods of settled weather.

“[This region] could have long, dry, warm periods, followed by a week of storminess, then go back to a two- or three-week period of dryness,” Roys said.

The weather pattern will limit the chances for Bora winds.

“This, in turn, will yield a scarce snow season for the mountains in Italy and the Dinarc Alps,” Roys said.

Waves of frigid air to get progressively worse in eastern Europe

The harshest of the winter cold will grip eastern Europe and eastern Scandinavia.

Chilly air is likely to dive down across this region early in the winter, but it will not be a long-lasting Arctic intrusion.

For some areas, temperatures throughout the first half of the winter may end up near to slightly above average.

“We could see some brief cold shots in December, but any true cold won’t happen until later in the season,” Roys said.

The coldest conditions are forecast from Finland to Ukraine as frigid air blasts in from Siberia.

Not only will the coldest air hold off until after the start of 2020, but so will the greatest opportunities for snow.

According to Roys, the snowiest part of the winter will not arrive until later in January or February with the onset of bitterly cold air.

The frigid air could occasionally push farther south and west, reaching into Poland, Slovakia and Romania.