Spring may be in full swing, but summer is right around the corner. Here's a look at what the weather will be like in your area in the upcoming months.

Summer weather will waste no time spreading across the Northeast and mid-Atlantic this season as heat arrives in June.

However, the Midwest and central Plains will see more of a gradual transition.

Meanwhile, the northern Plains will benefit from a below-normal season for severe weather, while the southern Plains are battered by flooding rainfall and severe storms. 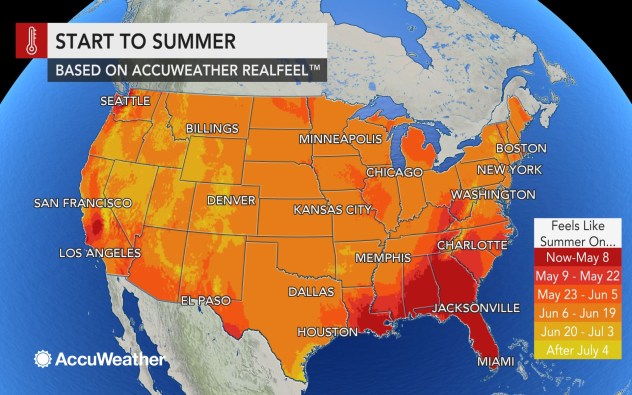 There will be no delay to the start of the summer in the Northeast, mid-Atlantic and Great Lakes as heat surges into the regions during June.

"Summer is going to make its entrance right off the bat. We’re going to have some back-and-forth weather in June, but that will get more consistent in July," said AccuWeather Lead Long-Range Meteorologist Paul Pastelok.

The warmth will promote a less-stable atmosphere, meaning a few severe weather events are possible early on.

Meanwhile, rain will fall less frequently, leading to the possibility of minor drought conditions developing in the interior Northeast. 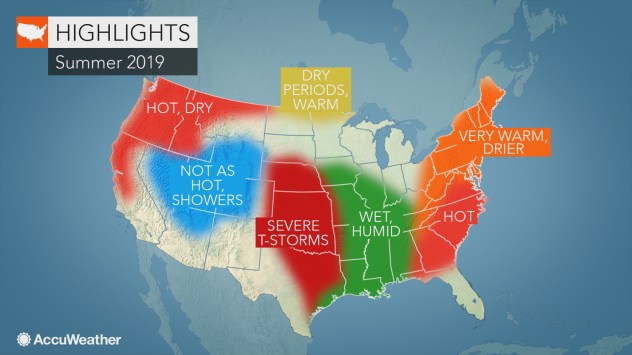 “For the I-95 corridor, it’s going to be a much better summer than we saw last year, weather-wise. I think we’ll notice a lot of vacation traffic as the warmer weather brings people out to the beaches,” Pastelok said.

After an abundance of rain over the past year in the Southeast, Tennessee Valley and Gulf Coast, the eastern half of the region will see a return to drier conditions.

This may make it easier for residents to spend time outdoors and tend to do-it-yourself projects.

Wet and humid weather will instead target western areas of these regions.

According to Pastelok, the lower Mississippi Valley and the Delta region will be under the gun for flooding going into the summer season.

“Rain and even heavy thunderstorms could lead to flooding in cities like Memphis, Tennessee; and Little Rock, Arkansas,” he said.

The abundance of rainfall so far this year will help to hold back high temperatures across much of the region.

“There are going to be periods of hotter weather in the eastern zones, but areas across the lower Mississippi Valley will struggle to climb,” he said.

After enduring heavy rain and snow over the past several months, the Midwest and central Plains will see a gradual transition to summer’s heat.

“Soil moisture is a big deal, it can dictate temperatures and how high they can get,” Pastelok said.

In these locations, the moisture will help to hold back the heat into the first half of the season.

“After that, it will depend on how frequently storms come,” he said.

It’s predicted that temperatures in the region will average near to below normal for the season as a whole.

As for severe weather, the Midwest and central Plains may remain active, but could see a lower-than-normal number of tornadoes this season.

However, meteorologists are closely watching eastern Tornado Alley, from the eastern Plains into the mid-Mississippi Valley, for outbreaks of wind and hail events.

The frequency of severe weather events in the northern Plains is also predicted to be below normal this season.

“The most active weather this year will be farther south,” Pastelok said.

The region is likely to see dryness and warm air from Canada spread southward over areas that missed out on heavy precipitation in the late winter and spring.

This may cause a small area of minor drought to form.

After Texas missed out on the heavy rainfall targeting the southern Plains last summer, Mother Nature will flip the script this year.

Eastern areas of the region will be targeted with significant precipitation throughout the summer, including severe thunderstorms in July.

This could lead to flooding in areas around Dallas, Texas; and Tulsa, Oklahoma, Pastelok said.

Severe storms may also target Kansas and parts of Oklahoma this season with the threat lingering longer than usual.

AccuWeather's 2019 Atlantic hurricane season forecastrn
Heat illness isn’t the only swimming danger: Protect yourself from these warm-water threats
Preparing for the costliest weather disaster in the US: How to stay safe before, during and after a flood
Cold water shock: Be aware of this lesser-known danger before hitting the water this summer

The summer could kick off with a few periods of rainfall in the Southwest, which could lead to localized flooding.

This will help to keep the heat at bay throughout the month of June.

Temperatures are likely to climb later in the season and are expected to average slightly above normal overall.

However, the intensity of the heat will depend on how the Southwest monsoon season plays out.

“Right now, it doesn’t look like it’s going to be a big monsoon season,” Pastelok said.

“If the monsoon is weaker across the Southwest, we could see the interior desert region warming even more,” Pastelok said.

The Northwest and the Rockies are poised to have a warmer-than-normal season as dry conditions allow temperatures to climb.

“The key in the Northwest is how fast does it dry out,” Pastelok said. “We’re waiting to see this, it’s the big risk factor.”

If both regions dry out in early June, there’s possibility that the summer season could run 3-5 degrees Fahrenheit above normal overall.

Areas already dealing with minor drought conditions in the Northwest are likely to worsen if this occurs, potentially developing into moderate to severe drought.

As temperatures rise and precipitation remains scarce, the Northwest – particularly from the Cascades into the Bitterroot chain – is the most likely target for a higher frequency of wildfires this summer.

“There is a lot vegetation, so the fuel is there. The question is whether it will dry out enough,” Pastelok said.

Ian will bring a substantial tornado threat to Florida