A 5.8 earthquake in California caused rockfall on this mountain near Lone Pine, California, on June 24. Dust clouds formed from the rocks falling in the slopes.

A magnitude 5.8 earthquake shook California on Wednesday morning around 10:40 a.m. PDT. The epicenter was located just miles away from the town of Lone Pine on the eastern side of the Sierra Nevada.

The shallow earthquake was so powerful that people felt it as far away as Las Vegas, Los Angeles, San Diego and Sacramento, according to the USGS. Some people received an early warning when an emergency alert told residents to "Drop, Cover, Hold On. Expect shaking now,” according to KRON-TV. 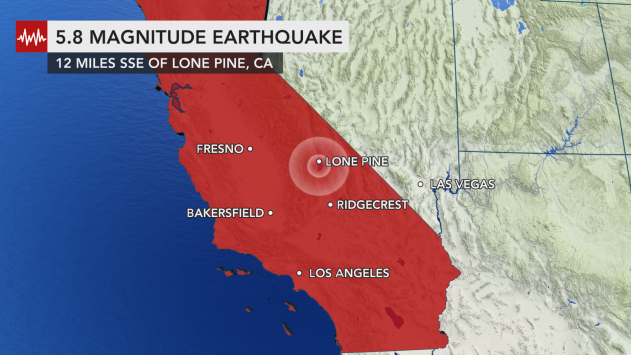 Over 10,000 people reported feeling the quake just minutes after it was recorded on the U.S. Geological Survey's web tracker.

Rock slides were reported along the eastern slopes of the Sierra near the epicenter, including areas near Whitney Portal, a popular hiking destination just west of Lone Pine.

Access to Whitney Portal was closed following the quake, and people were told to evacuate the area.

Rock that took out several campsites and trees pic.twitter.com/bcnZb3h3Yx

More than 200 aftershocks were recorded in the area ranging from magnitude 1.0 to 4.6.

In 1872, a 7.4 magnitude earthquake struck the same area — one of the biggest in California's history, according to Visalia Times-Delta. The powerful earthquake killed 27 people and injured 57 more. Fortunately, Wednesday's seismic event was less severe, and no major damage or ground failure has been recorded by the USGS.