While fall is not even a week old yet, some parts of the northern United States are bracing for a major snowstorm.

The calendar is barely a week into fall, but winter storm watches and warnings are up in four states as a potential blizzard threatens to deliver an early wintry blast.

The snowstorm could reach "historic" proportions, forecasters have warned, and will unleash heavy and wet snow, tropical-storm-force winds and bitter cold in the Northwest and southern Canada. The heavy and wet nature of the early-season snow will threaten to weigh down tree limbs that are still covered in changing foliage.

Subfreezing air plunged into the region from the Canadian Arctic on Friday morning, laying the ground for the winter-like storm to unfold.

The NWS warned that the early snowfall and cold to follow has the potential to be "historic." The agency also emphasized life-threatening conditions expected in the backcountry and damaging winds that could add to the damage to trees and power lines, aligning with forecasts made by AccuWeather meteorologists earlier in the week. 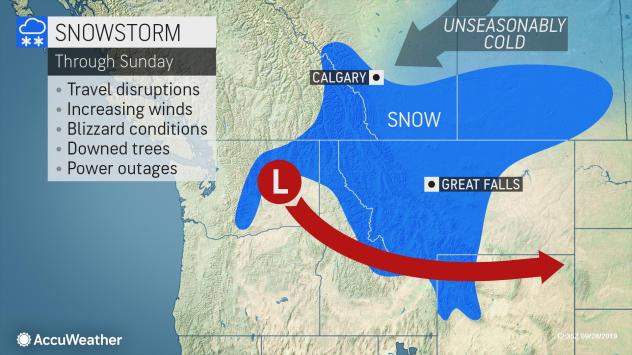 AccuWeather spoke with Rebecca Connors, public information officer for the City of Helena Public Works, in anticipation of the early-season snowstorm.

"It’s Montana, and this is kind of the characteristic of Montana, freak snowstorms. Our seasons are short except for winter," Connors told AccuWeather.

Montana crews are gearing up for the disruptive snowfall and preparing for the challenges an early-season storm presents, David Knoepke, transportation systems director for the City of Helena, said in an interview with AccuWeather.

"We’ll have to build up all of our snowplow trucks. We’re starting that today [Wednesday] into the weekend. It is a little bit earlier than typical, but not uncommon," Knoepke told AccuWeather. "Our snow policy, strategy is that we’ll get the emergency snow routes done first and then go onto the rest of our priority routes and make sure that everything is sanded and cleared as appropriate to make travel safe."

"I think some of it will be we have a lot of summer recreational things are parked in the parking lanes, boats, trailers, basketball hoops, that typically aren’t in there when our snow season really starts, so just maneuvering around all the extra vehicles that may be parked on the streets," Knoepke added.

As the storm evolves, temperatures may plummet 50 degrees Fahrenheit (25 degrees Celsius) or more in some locations.

Those in the high country and intermediate elevations will be at risk for becoming stranded and could be in a life-threatening situation for a few days during and after the storm with below-freezing temperatures predicted.

In Glacier National Park, wintry weather has already taken hold of Logan Pass with snow and cold air arriving. The national park announced temporary closures on Thursday due to the impending storm, and “camping not advised” signs have been placed in St. Mary Campground, which will remain open. 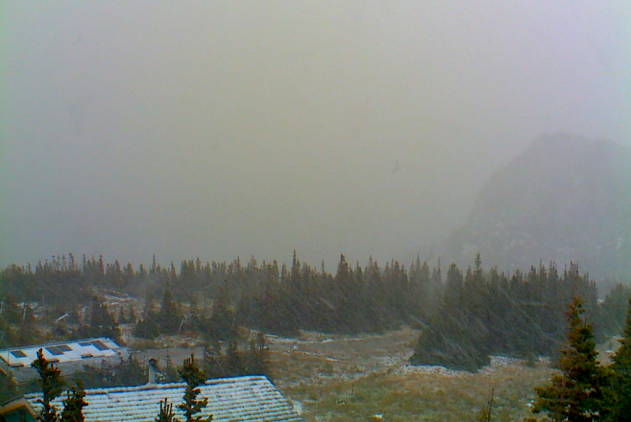 The scene began to turn snowy at Logan Pass in Montana on Thursday, Sept. 26, 2019, the view from a webcam showed. Logan Pass sits at an elevation of 6,600 feet and will be hit this weekend by a major snowstorm. (Twitter / NWS)

Widespread power outages may occur amid the cold conditions accompanying the winter-like storm.

"It's a very big concern here; we're just beginning to turn our colors, so trees are fully loaded with foliage here," LeeAnn Allegretto, a meteorologist with the NWS in Missoula, told AccuWeather. "Snow will have a huge impact and will likely cause downed trees and potentially plenty of damage/power outages."

The combination of wind, snow and other conditions are forecast to cause AccuWeather RealFeel® Temperatures to dip below freezing and can approach zero F in some locations. 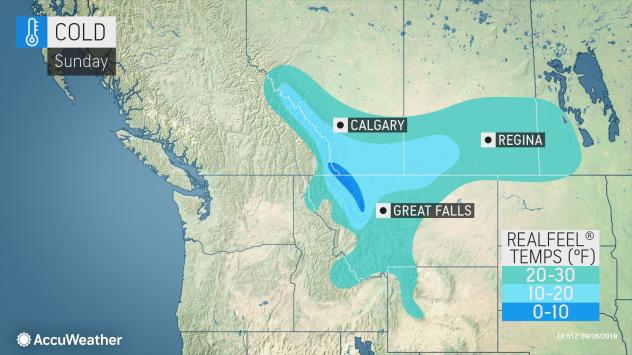 As rain changes from snow from higher elevations to lower elevations and from north to south, travel conditions will deteriorate over the back roads in the high elevations first into early Saturday, but progress through the passes and then to roads at lower elevations as the storm continues later Saturday to Sunday.

Travel is likely to be difficult with slush and snow likely along stretches of Canada Highway 1 and interstates 15 and 94.

At times the combination of wind and snow will make for very low visibility that can approach blizzard conditions, including in Glacier National Park, Montana.

"Stay home. Stay safe. Don't do anything silly," public information officer for the City of Butte-Silver Bow, Jason Parish, told AccuWeather, should the weather bring the worst-case scenario for the city. He added that emergency services will be available as necessary to assist, but people should not take any unnecessary chances.

Despite the storm occurring early in the season, Parish said that it is nothing new for the city.

"We've seen snow 12 months out of the year before. More than once we've sat at a Fourth of July parade and had snow falling," Parish said. 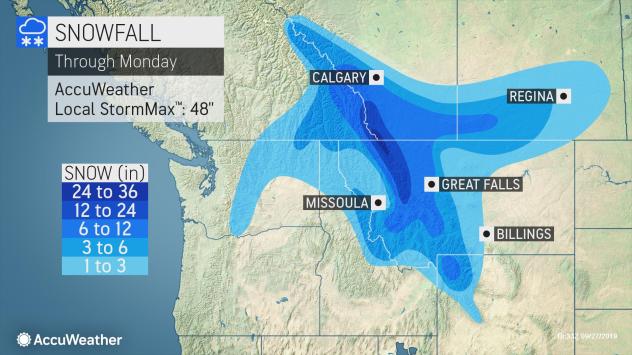 The heaviest amount of snow, 2-3 feet, with an AccuWeather Local StormMax™ of 48 inches is forecast along the east-facing slopes of the Sawtooth, Flathead and Lewis and Clark ranges in Montana.

However a general 1-2 feet (25-50 cm) of snow will fall over the mountains with anywhere from a bit of slush to several inches of snow at low elevations, including some of the valley floors in central and eastern Montana and British Columbia and the High Plains and Prairies of Alberta and Saskatchewan. 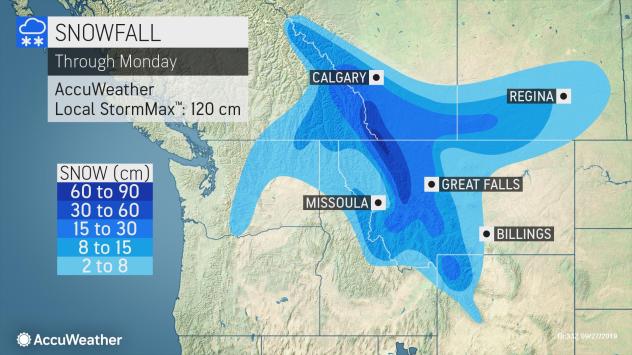 Up to a few inches of snow can fall over the mountains in northeastern Washington, the eastern foothills of the Cascades and northern Idaho.

Up to a foot of snow is forecast to fall on parts of Yellowstone National Park in northwestern Wyoming and south-central Montana.

Great Falls, Montana, is expected to receive 6-12 inches of snow. Accumulations around Calgary, Alberta, are likely to range from a few centimeters over the Prairies east of the city to 25 centimeters over the foothills to the west. The cities of Missoula, Montana, and Spokane, Washington, are likely to receive 1-3 inches of snow and slush from the storm this weekend.

The vast area of fresh snow cover will set the stage for record-challenging low temperatures early next week. 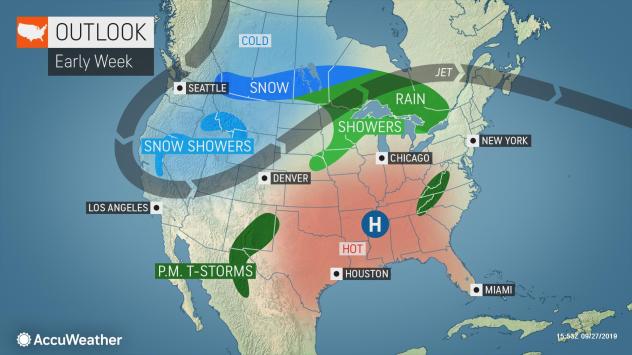 Temperatures are likely to dip into the single digits over the high country and the teens and 20s F over the intermediate elevations to near or just below freezing in over the High Plains and Prairies during Sunday night, Monday night and perhaps Tuesday night.

Meanwhile, on the warmer side of the storm, southwest of the Continental Divide, locally heavy rain is likely to fall on part of the Great Basin, including the Salt Lake City area later this weekend. Localized flooding can occur.

Drenching showers will also pivot to the southeast of the snowstorm over parts of the central Plains and the Upper Midwest.

Download the free AccuWeather app to stay aware of the latest forecast and winter storm warnings and advisories for your area. Keep checking back for updates on AccuWeather.com and stay tuned to the AccuWeather Network on DirecTV, Frontier and Verizon Fios.