Three other people were injured when the flood waters struck Albania, according to the Associated Press.

At least 18 dozen homes were destroyed in weather-related incidents, while many roads became impassable across the country. Officials closed schools throughout the nation on Friday. 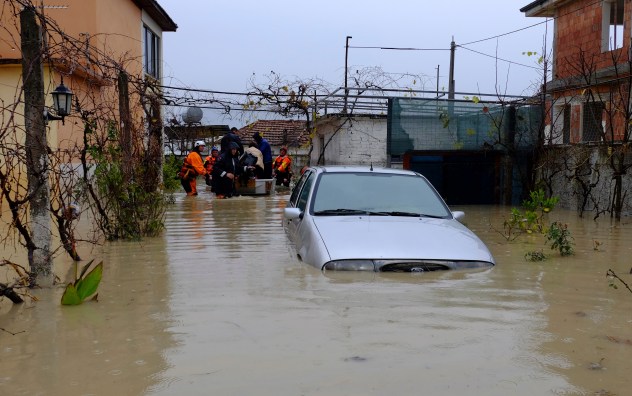 Authorities help a family evacuate from their home after heavy rainfall in the village of Hasan, about 25 kilometers (15 miles) north of Tirana on Friday, 1 December 2017. (AP Photo/Hektor Pustina)

The flooding rain resulted as moisture from the Mediterranean Sea interacted with a slow-moving front.

One weather observation site near Albania’s capital of Tirana recorded 121 mm (4.76 inches) of rain in the 24 hours ending on Friday morning, local time. A similar total was measured in Kukës in northeastern Albania, while nearly 150 mm (6 inches) inundated Gjirokastër in the south.

More lives and property will be threatened into Friday night as heavy rain continues to stream into Albania, especially southern areas, and northwestern Greece.

More rivers may overflow their banks, and mudslides may get triggered.

Residents should prepare for more road closures and damaged bridges. Avoid a life-threatening situation by never driving through a flooded road. Flight delays and cancellations may disrupt air travel.

As the flooding rain inundated Albania, the AP reports that roughly 100 people were evacuated from a shopping mall near Tirana. Tens of thousands of residents across the country were affected by power cuts. 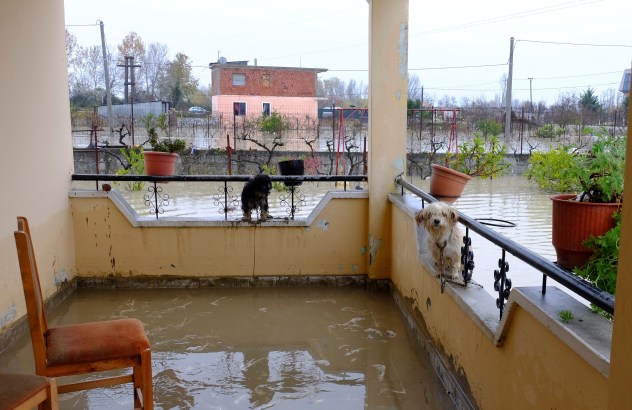 Two dogs stand in a flooded home after heavy rainfall in the village of Hasan, about 25 kilometers (15 miles) north of Tirana on Friday, 1 December 2017. (AP Photo/Hektor Pustina)

Additional periods of rain with lowering snow levels will follow for this weekend. Worse than putting a damper on cleanup efforts, downpours may return for a time on Saturday night and aggravate flooding.

A turn to sunny but chilly weather is expected for Tuesday and Wednesday. Temperatures in the lower elevations, away from the coast, will plummet down to freezing.