Tens of thousands of flamingos packed into a lake in Navi Mumbai, India, on April 22, as a lockdown continued in the area due to COVID-19.

The average start of India's southwest monsoon is just a month and a half away. Will this year's wet season bring similar conditions as the last two years? AccuWeather's long-range forecasters have already been hard at work answering this question.

The average date of the onset of the southwest monsoon in India is 1 June, and the season typically continues through the end of September, bringing the country, as a whole, a wet season.

It is during this season that India receives the bulk of the precipitation needed for the country's water supply and agricultural industry. Some locations, like Mumbai, average as much as 2,200 mm (87 inches) of rainfall.

Sunny, dry days and temperatures climbing into the middle 40s Celsius (lower 110s Fahrenheit) have many across India looking toward the start of the cooler wet season.

"Compared to last year, I expect an earlier start to the monsoon season," said Nicholls. "The onset of the southwest monsoon was 8 June in 2019, but this year we expect it to be closer to the normal date of 1 June." 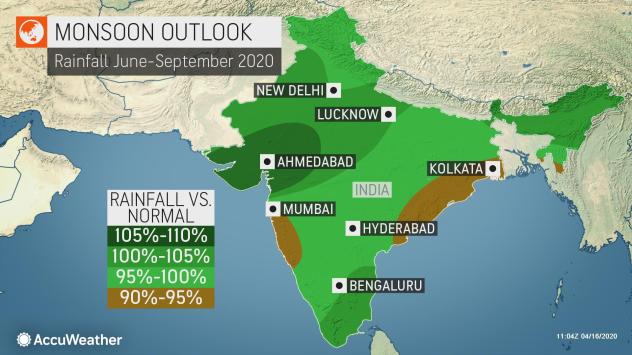 Overall, much of the country can expect near-normal rainfall this year.

Another wet season is in store for northwestern areas of the country, including Punjab, Rajasthan, Gujarat, parts of Uttar Pradesh and Madhya Pradesh, where rainfall totals are once again expected to reach above normal.

Near-normal advancement of the monsoon is also expected for the 2020 season. The heaviest rain will start in the southwestern part of the country and gradually expand to northern and eastern India throughout the season before it then retreats in the reverse order.

Despite the normal advancement, Nicholls warns that some areas could deal with drier spells early in the season.

"There could be dryness problems early on in parts of northeastern India, as well as in as Goa, northwestern Karnataka and southwestern Maharashtra," said Nicholls.

A late start in these areas could lead to water shortages in the future, especially in northeastern India where rainfall was also below normal last monsoon season.

There are a few wildcard factors that could derail the late-season forecast, including how much La Nina and the Indian Ocean Dipole (IOD) influence the timing and amount of rainfall.

"La Nina conditions late in the season could be beneficial," added Nicholls.

"Unlike last year, the IOD should be neutral to weakly negative, but at this point, it does not look to be as big of a factor as it was in 2019." 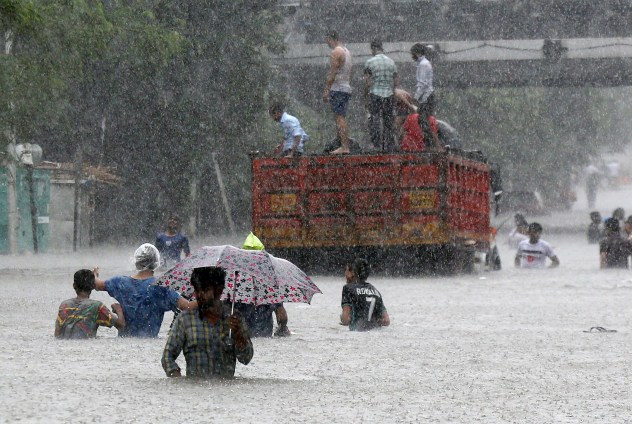 People navigate their way through a flooded street as it rains in Mumbai, India, Wednesday, Sept. 4, 2019. Incessant rainfall has resulted in flooding in many parts of the city, disrupting traffic movement and daily life in the city. (AP Photo/Rajanish Kakade)

Despite the monsoon season's long-term benefits, residents across the country will encounter a multitude of hazards as the deluge sets in. Heavy thunderstorms will threaten severe flash flooding, mudslides and frequent lightning strikes. Hundreds of people have been killed each year amid the monsoon downpours.

Typically, the monsoon rain will also help to improve air quality across the country. However, ongoing lockdowns and decreased activity across the country due to the COVID-19 pandemic have already helped to clear the air, bringing the Himalayans into view for some for the first time in decades.