The inside story of the first US tornado warning

The first Tornado Warning was issued in Oklahoma in 1948, but that's not the whole story.

We published a story and a video last week entitled "Scientists were first who dared to forecast 'an act of God'" about the first official U.S. tornado warning issued in 1948. For brevity, and because we wanted to concentrate on the weather, we left out some of the details about how the warning came to be, as well as the "political" issues that kept warnings from coming out before.

While the AccuWeather.com article primarily draws from the SPC webpage about their history and the 1948 tornado research paper, what I present here is a summary of some of the information presented in chapters 3-4 in Mike Smith's Book "Warnings" which gives a bit of an insider's look.

Until 1948, scientists didn't think they had the tools to be able to forecast a tornado before it hit. But days after one devastated an Air Force base, two military meteorologists found a way.

In 1884, John Park Finley of the U.S. Army Signal Corps proposed an experimental tornado forecasting system. After political scandals and questionable forecasts, the system was abandoned in 1887.  After the U.S. Weather Bureau formed in 1891, it established regulations prohibiting its staff from forecasting tornadoes. For the next 60 years, not much changed.

Enter Robert Miller, who had worked for the Air Corps as a meteorologist for many years. He was one of the first meteorologists to analyze the atmosphere in three dimensions. On March 20, 1948, just 19 days after he began working at Tinker Air Force Base in Oklahoma, an unforeseen tornado struck the base, causing $10 million in damage. 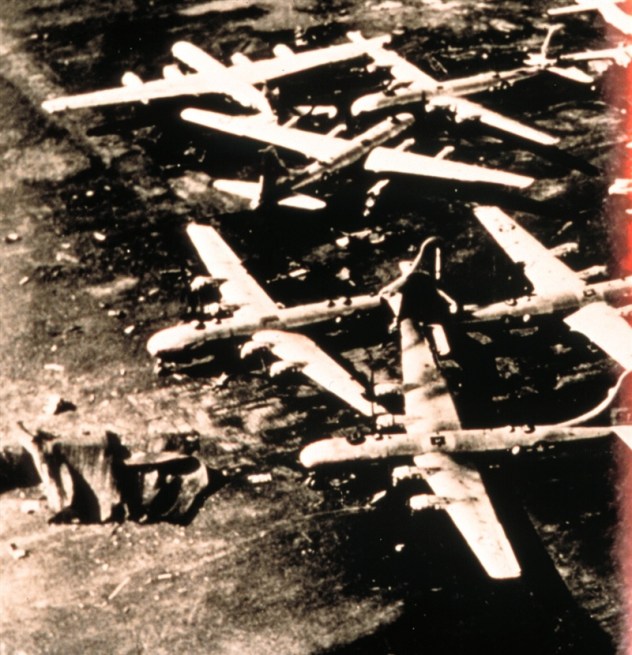 Air Force officials demanded an investigation, which found that the tornadoes could not have been forecast. The Air Force then commissioned a three-day study during which Miller and Major Ernest J. Fawbush investigated the feasibility of forecasting strong thunderstorms that could produce a twister.

On March 25, Miller and Fawbush alerted the base commander, General Fred S. Borum, that they believed thunderstorms producing tornadoes could happen near the base again that day. They noted, however, that the statistical odds were very much against that forecast. At the beginning of their 5:00 p.m. forecast window, a brief, weak thunderstorm passed over the base, and Miller believed their forecast was a bust. At 6:00 p.m., after they had gone home for the day, another tornado struck the base, causing an additional $6 million in damage. 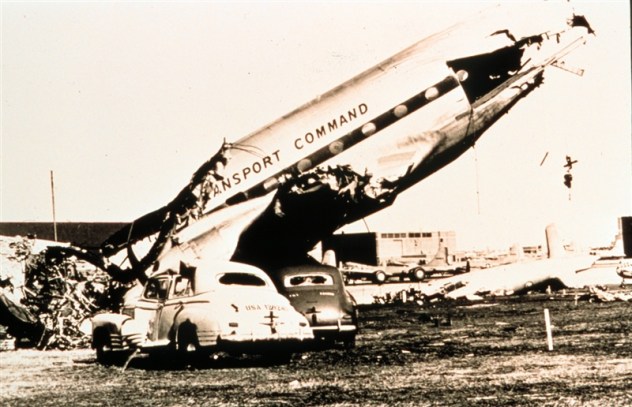 Meteorologists Miller and Fawbush, hailed as heroes, continued their research. By 1951, the first official Air Force tornado forecasting center was established. Over at the U.S. Weather Bureau, however, the ban on tornado warnings continued. The Bureau had issued a tornado warning the prior year, but this fact was covered up to avoid disciplinary action.

The successful tornado forecast at Tinker AFB rocked the meteorological community. Responding to public pressure, Meteorologist Harry Volkman at WKY-TV in Oklahoma requested access to future Tinker AFB tornado forecasts. Tinker denied the request, citing Air Force regulations. In 1952, WKY-TV sent reporter Frank McGee to the base under the guise of a covering tornado forecasting. During McGee’s visit, Tinker predicted a tornado. McGee called Volkman, who put the warning on the air. This was the first public tornado advisory. 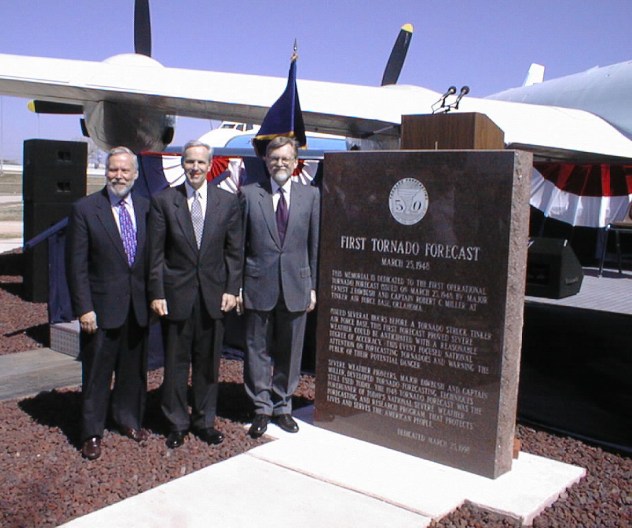 More information about the first tornado forecasts, including additional photos and Miller's personal account of the even, can be found on the NSSL Golden Anniversary website.

After Miller passed away in 1998, Larry Wilson wrote a poem about their efforts:

There once was a time in the ‘40’s
when the Air Force just focused on Sorties!

No need to upset the balance of nature
with things like severe storm nomenclature.

All efforts were primed just to win the Big War,
So forecasting weather was akin to folklore.

In 1947, tornadoes come and tornadoes go.
Some are destructive, and some spin for show.

No reason to panic, no need to excite
for forecasting tornadoes would stir public fright.

So I’m writing a poem and getting it polished,
but just like Woodward, I’m getting demolished.

As time moves on in forty-eight...
Spring arrives, and so does fate.

The Ides of March, they come and go
only to signal, a really big show.

It’s warm and humid, and dust aplenty
as Oklahoma wakens to March the twenty.

But no reason to worry, no need to run
for the sky is so blue, under a noonday sun.

But look to the West, an ominous sign
something is swelling along the old dry line.

As daylight fades, the sky grows darker
and thunder is heard like a bulldog barker.

With rushing winds and bouncing hail,
the storm spins up, as sirens wail.

With reckless response, like Nolan Ryan’s sinker
a tornado descends and devastates Tinker!

The base is in ruin, the damage is great
and forecasters are challenged to begin a debate.

So Fawbush and Miller review all the charts
and wonder if forecasting beats throwing the darts.

With quickness and toil, they took on the hunt.
Was the research worth it? --- or should they just punt?

The questions were answered on March twenty-five,
as parameters galore all came alive.

The moisture was there with southerly wind
and dryness was evident across the Big Bend.

For all the parameters to get in a tangle,
the winds aloft must come from the right angle.

Fawbush and Miller prepared for the forum,
the briefing each morning for General Borum.

With parameters in place to dazzle the eye,
the General inquired if his planes should fly.

Fawbush and Miller, remembering the past
recalled it was similar to Tinker’s last.

The briefing was given, and as one might figure
the General inquired if there really was a trigger.

The forecasters were stunned and quickly replied:
“Yes, Sir! Yes, Sir! ... and find someplace to hide.”

“My base! My base!” the General exclaimed!
“Get the planes hangered, before we get maimed!”

As hard as it is, to simply construe
the sky turned black after being so blue.

A ringing of phones soon brought the big news!
“TORNADO HITS TINKER...AND NO PLANES WE LOSE!”

‘Twas the greatest of forecasts, as many now know
and 50 years later, we’re tinkering to grow.