Ladies and gentlemen, it's time to review some weather gadgets for 2021. the breaking news is that the new Nest Cameras have just been launched. Secondly, some exciting news in the weather station industry has led to a plethora of new gadgets this season, including a cellular weather station that you can put anywhere. Plus: A consumer-grade weather station that measures not only solar and lightning, but also air quality.

First off, the much anticipated new lineup of Nest cameras has been launched. If you've been following my blog, you know I've been a big fan of Nest since when they were known as the Dropcam startup in 2014. They are the only consumer 24/7 video recording security service (which you really need for observing the weather), and their cloud video storage fees were slashed last year. 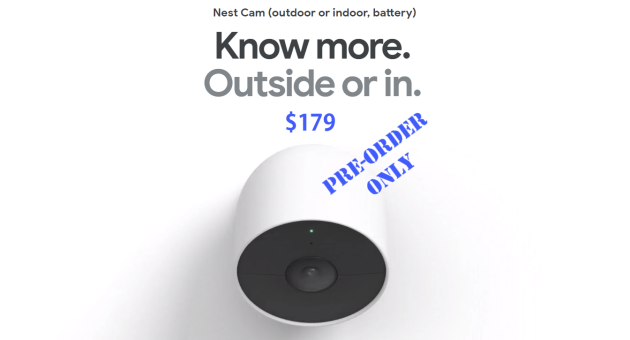 The new "Nest Cam" (indoor or outdoor, wireless/battery only) can be pre-ordered as of this week, so I can't give you a review yet, but I can speak to the price and specs. It sells for $179 which is $20 lower than the previous version sells for (and $70 lower than the original price), but still higher than most others, and there's a caveat (read more below).

The big change with this camera is that it's battery-powered. This is great because it solves one of the big problems with the Nest cameras -- if your power goes out, they stop recording.* Not so great, however, if you don't buy the optional magnetic AC adapter, you won't be able to do 24/7 recording. Unfortunately, that cable is $40 and can't be currently pre-ordered (I got an error when I tried to check out with it in my card: "An unexpected error has occurred. Please try again later. [OR-SOFF-01]").

Surprisingly, the resolution is not improved, neither is the field of vision, but it does now come with HDR, which can be helpful to lighten your driveway shadows without overexposing the sky. 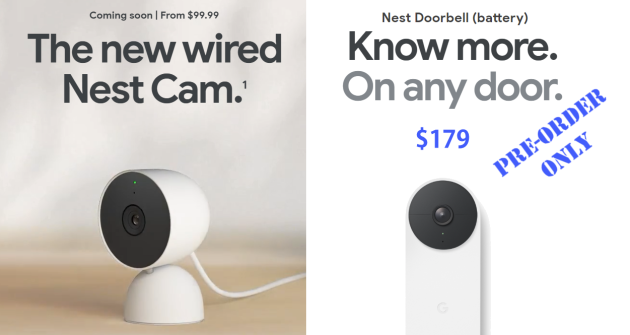 Coming soon is the Nest Cam (Wired), an indoor camera that will sell for $99, a much more reasonable price than their original $199 and current $149, as well as a Nest Cam with Floodlight for $249 (hopefully it will have higher resolution). The Nest Doorbell (Battery) is also available for pre-order at $179. This saves you $70 versus their old doorbell, and wiring is still an option, but it's unclear whether that will get you 24/7 recording or not. The product page says no, but the page with the comparison against the old doorbell camera says yes. Assuming the answer is "no," and with a reduction of field-of-view on the new doorbell camera, I'm not loving this model.

*There is another way around Nest cameras not recording after power loss... I have connected my cable modem and all of my nest cameras to a UPS (uninterruptable power supply), which gives them an hour or two of power and transmission time. 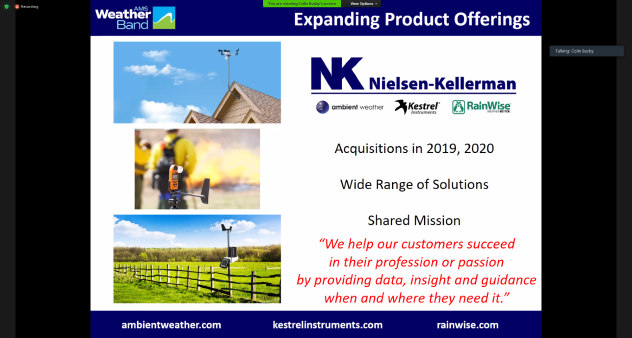 Most recently, this transition and their new products were discussed on an AMS WeatherBand webinar in July. Here are some reviews of the key products:

The KestrelMet 6000 is a weather station that you can install anywhere in 20 minutes, and it will transmit the weather observations via cellular data four times per hour indefinitely, running on solar power.

I've always wanted to be able to keep an eye on the deep valley temperatures in Wilkes County, North Carolina (where I grew up), but there isn't an easy way to install wi-fi in the area where I want to measure. I was able to deploy this station at the location in less than 30 minutes, including securing the tripod to the ground. I literally turned it on and it started transmitting immediately, despite the low valley location (in my opinion, Verizon almost always has the best coverage, here in Pennsylvania, and even in the valleys in the North Carolina mountains, but AT&T service is also available for this weather station).

The data is uploaded every 15 minutes, with the first year of cell service free and the second year around $50 (I think, don't quote me on that). The data displays on KestrelMet.Net and AmbientWeather.Net with similar graphs and tiles (see below). 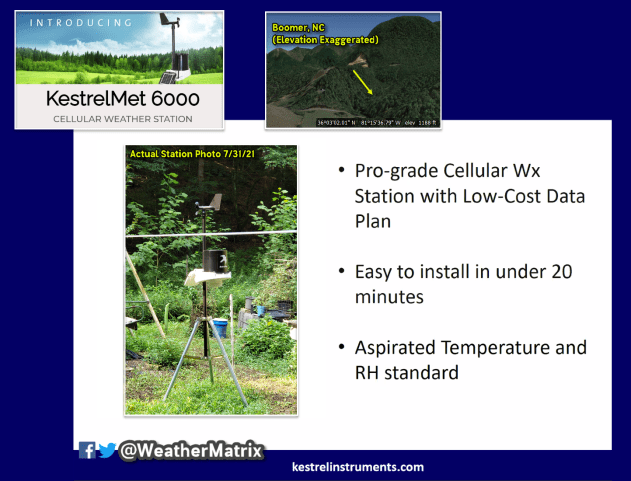 AmbientWeather now sells its own branded instruments exclusively. The Ambient Weather WS-5000 is the top-of-the-line weather station. It includes a nice display, and you can add lightning, air quality (indoor or out) and soil moisture sensors, as well as standard air and probe sensors. The list price is $429 but, even when completely tricked out with all the aforementioned sensors, it wil only run you up to $566. 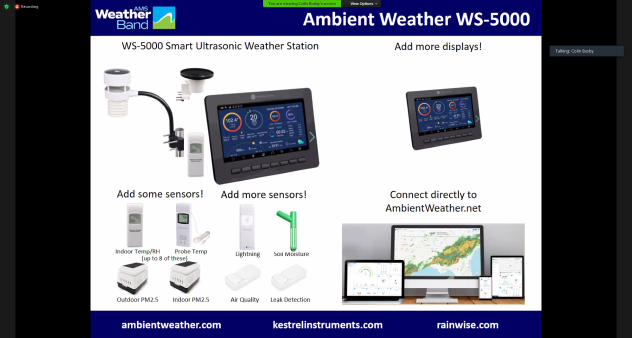 The WS-5000 comes with an ultrasonic anemometer. This more modern, simple version of the equipment comes without the problems of a wind cup anemometer, which has parts that can be damaged by hail and which can freeze up in winter. How accurate is the ultrasonic wind sensor? AmbientWeather says they are working with wind tunnel experts to measure the accuracy currently and will report back soon.

Your weather data can transmit to AmbientWeather's free weather network website, AmbientWeather.Net, which is pretty neat. It stores and graphs your data on a modern dashboard (my station shown below, and you can see my live dashboard here), and you can even add a webcam (for now, just FTP or a URL). Will the Ambient Webcam be back? Yes, they tell me, soon. 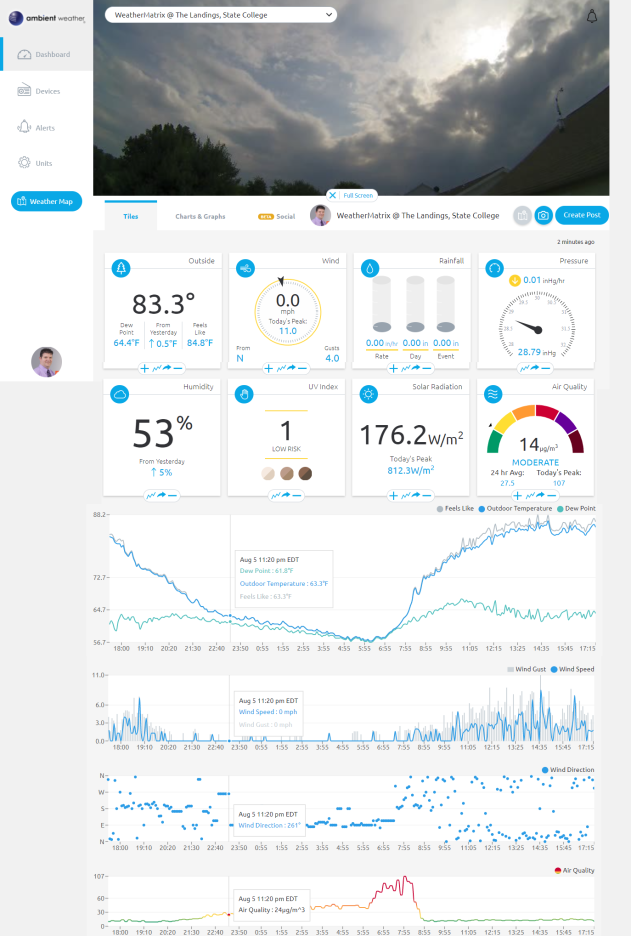 DISCLAIMER: This is not an official endorsement from AccuWeather, Inc. Product was supplied by some of the vendors for these reviews.