UPDATE August 2, 2020: Isaias, now a Tropical Storm, is causing wind gusts over 60 mph at two stations in the Bahamas.

July 31, 2020: Hurricane Isaias dropped more than a foot of rain on Puerto Rico, causing widespread flooding and cutting power to at least 300,000 customers. 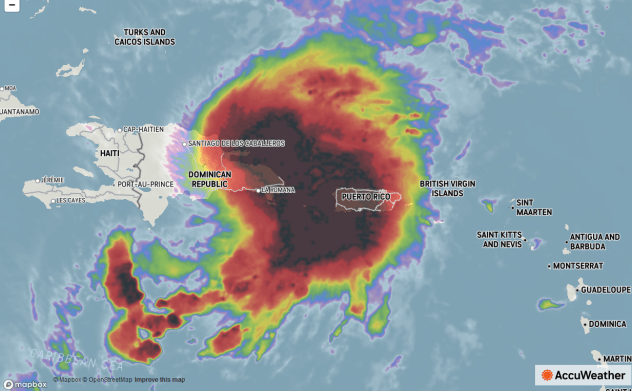 Hurricane Isaias pulls away from Puerto Rico on the morning of July 31, 2020 (AccuWeather.com)

Nearly a foot of rain was reported by USGS and CoCoRAHs in 48 hours:

NOAA AHPS doppler/gauge rainfall estimate for Puerto Rico, showing around a foot of rain in the purple areas. 48-hour gauge amounts are shown below:

This rainfall caused some impressive river flood gauge rises. The Rio Guanajibo river near Hormigueros, PR USGS gauge rose from 11 feet Thursday morning to over 25.37 feet in the afternoon, as much as 1.35 ft/hr. 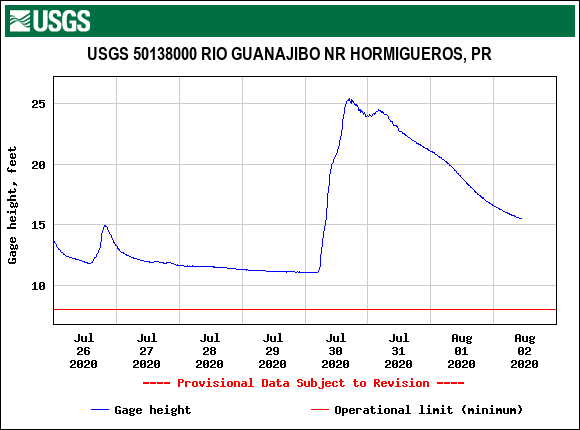 This was considered Moderate flooding and particularly impressive considering the record is 28.59 ft during Hurricane Maria in 2017, which dropped a lot more rainfall on the area. Isaias' gauge reading will rank it as the #8 all-time crest for this station.

The Rio Grande De Manati near Ciales, PR rose from 3 feet this morning to 13.58 ft Thursday afternoon (graph), as quickly as 1.02 ft/hr. This is considered Moderate flooding but the record is 50 feet way back in 1899 -- more recently, 43.36 ft during Hurricane Maria in 2017.  Most other flood gauges in the state did not reach Moderate stage.

The flooding was also recorded by two Phenocam webcams.

The webcam at Rio Cupeyes, Puerto Rico (CUPE), shown above, was the most impressive, with a massive rise in the creek overnight, then high winds blew branches down in front of the camera, as the water slowly receded.

The cam at Rio Guilarte, Puerto Rico (GUIL) also showed a fastly-rising creek, then a slow return to normalcy through the next day: