2021 was a crazy year of weather and had some really unusual trends. Here's a look at the hottest, coldest, wettest and most severe locations.

It was a crazy year of weather, and I've got the proof. With the help of IEM, I've counted all of the weather watches and warnings in 2021 for each NWS office (roughly: metro area), as well as storm spotter reports, and looked at departures from the average of recent years (see the bottom of the blog for methodology and disclaimers).

Here are the highest and lowest temperatures officially recorded in the contiguous U.S. during 2021. (These temperatures were as of the end of October, but I'm reasonably sure neither was exceeded). After Bottineau, North Dakota, fell to -51 on Feb. 13, Death Valley, California, hit 130 degrees during their heat wave on July 9, 2021. 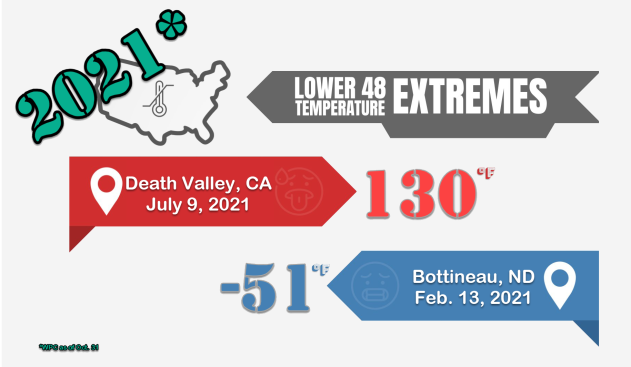 MORE THAN 100 INCHES OF RAINFALL:

This map shows the total liquid precipitation for this year. The highest amount officially recorded by the official NOAA ACIS stations in the contiguous U.S., was 115.71 inches at Quillayute, Washington. Although that station is typically extremely wet, Gulfport, Mississippi, almost cracked 100 inches as well, coming in as the number two highest reading for the year at 99.11 inches. According to the Southeast Regional Climate Center, stations at Slidell, LA, as well as Gulfport, Biloxi, and Pascagoula, MS and recorded their #1 highest rainfall year. At 86.02", New Orleans was #2, bested only by 1991 - when they did top 100 inches. 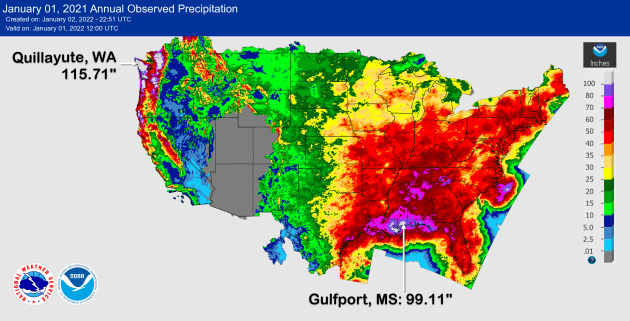 Unofficially, 27 different CoCoRaHS stations broke the 100-inch mark for the year, and nearly half were in the South! Repeated tropical storms passing through the South was to to blame. The top 5 reports in the contiguous U.S. were:

According to Vaisala's annual lightning report, over 194 million lightning events (in-cloud pulses and cloud-to-ground strokes) were detected in 2021 in the contiguous US, 24 million more than 2020, but still short of the average of 220 million. 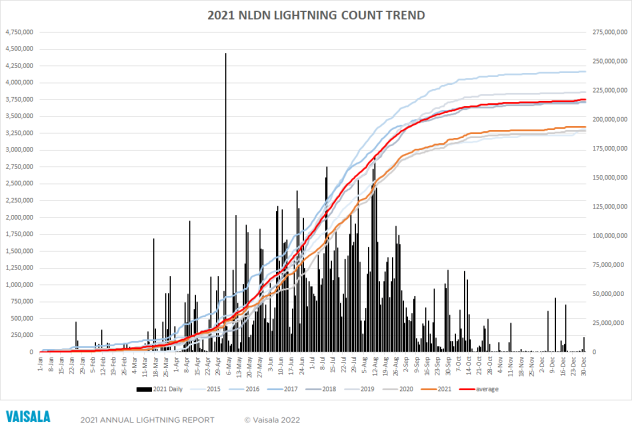 One day with multiple severe weather outbreaks, May 2, brought 4.4 million lightning events to the U.S. You'll notice the Southwest and Northeast saw a lot more lightning than average... keep that in mind when you look at the severe weather maps below. 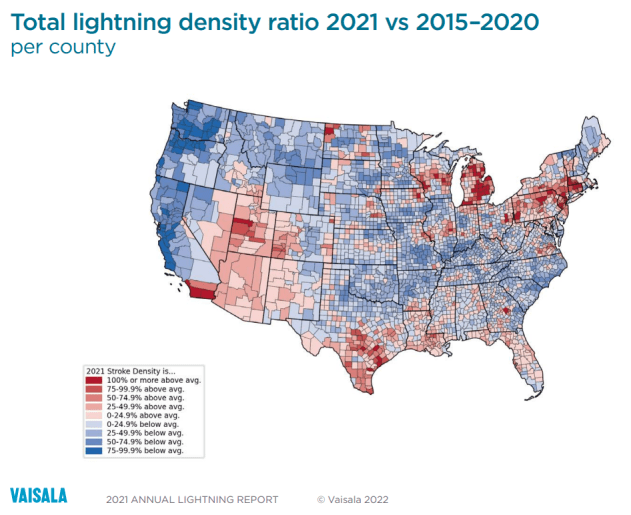 Birmingham, Alabama, not anywhere in Tornado Alley, had the highest number of tornado warnings in 2021, and was first in the nation for tornado reports. 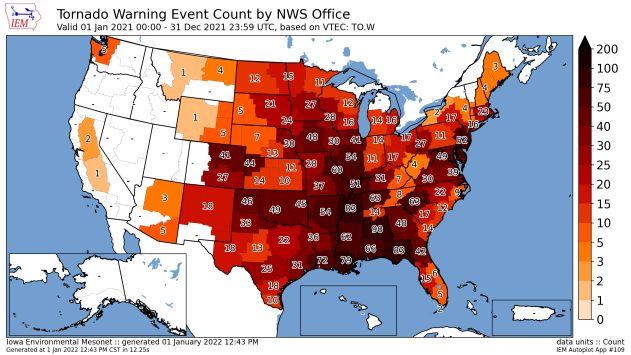 Continuing the southern trend, Memphis, Tennessee, and Tallahassee, Florida, came in at number two with 83 tornado warnings each, with Jackson, Mississippi, number two for tornado reports. Even Philadelphia, at 52, saw more tornado warnings in 2021 than any metro area in the central U.S. typically considered "tornado alley." 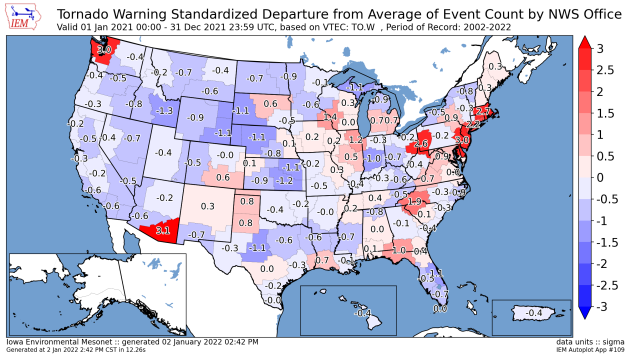 Believe it or not, the numbers in "tornado alley" and the south weren't that different from recent memory, which is why people say that tornado alley shifted east. Interestingly, the highest departure from normal tornado warnings award goes to Tucson, Arizona, with Philadelphia and Seattle tying for number two (as far from "tornado alley" as you can get).

Seattle had five tornado warnings last year and the same number this year. How unusual is that? They don't usually get any, in fact for Seattle, there were only three other tornado warnings between 1986 and 2019! In fact, the entire state of Washington had only seen one tornado warning between December and March before 2020! 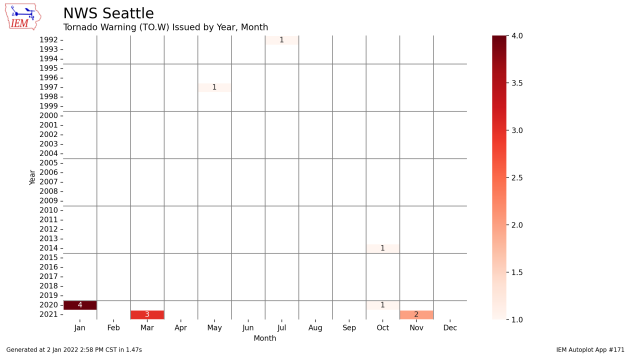 As far as actual tornadoes reported, a lot of atypical cities showed up when compared to previous years. Number one for departure from normal was Pittsburgh, Pennsylvania, followed by Philadelphia, then a tie between Boston and Salt Lake City, with New York City as number three! 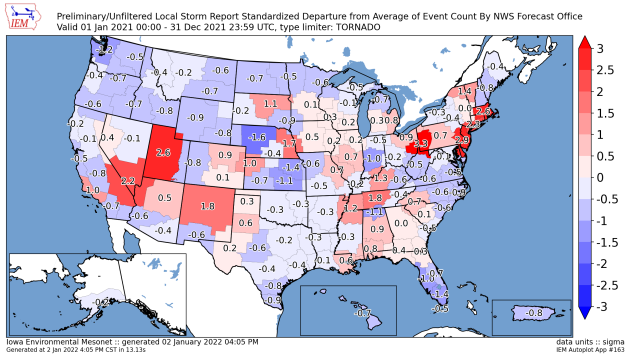 Overall, it was an extremely busy severe weather year in Arizona. Tucson, Arizona, had the highest departure from normal for severe thunderstorm and tornado watches and warnings, and tied for number two in flood warnings, while Flagstaff and Yuma led the pack for flood warning departures. Flagstaff also was number one for seeing unusually high numbers of hail and wind damage reports, compared to previous years.

How many days were there with tornado warnings in 2021? New Orleans, Louisiana, had 23, far more than any other area, and also had the highest number of Flood Warnings, 400 -- 10 of which were flood emergencies. This was unusual for the area, tying with Tucson for second place for highest departure of flood warnings. 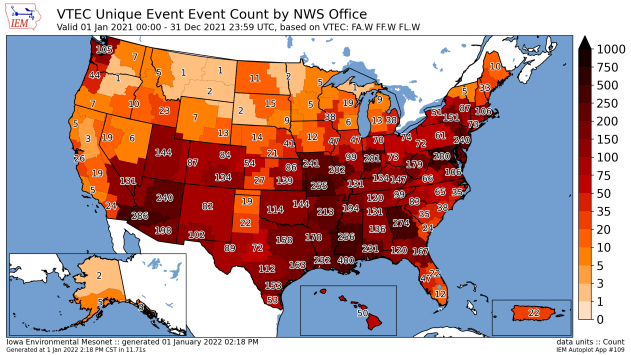 New Orleans also had 31 days with tropical storm or hurricane watches and warnings, nearly three times the number two spot. Louisiana is no stranger to tropical storms, of course, so this ranked near normal for them.

Of all places, New York City had the highest departure from normal for tropical storm and hurricane advisories, and this year ranked number one since 2005 for those types of advisories. This was during a season when every inch of the coast from the Mexico border to New Hampshire experienced at least one tropical storm or hurricane watch or warning, but New York City was flooded by Elsa, Henri and Ida. 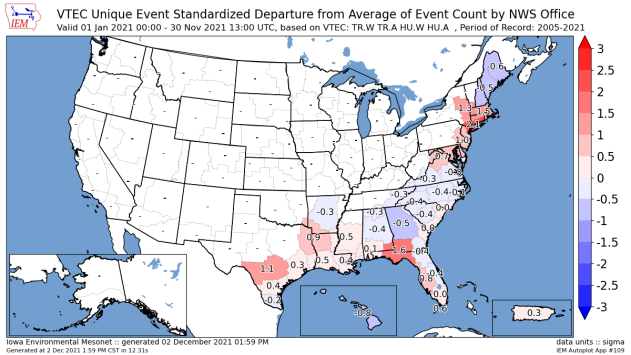 Two other big weather stories of the year showed up in these maps. As a result of the extreme cold outbreak in February, Corpus Christi, Texas, had the highest departure from normal for winter weather advisories, ranking number one since 2005, with Houston coming in at number two. 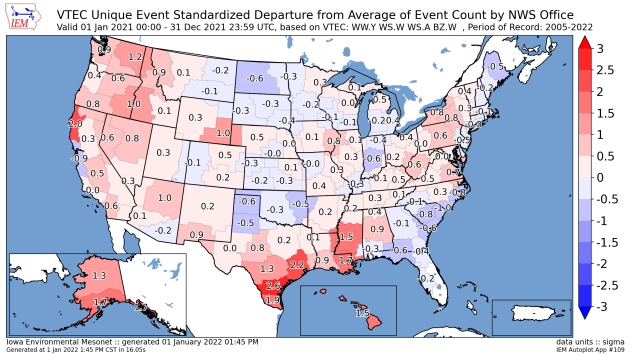 Because of the extreme heat wave in the Northwest in August, Billings, Montana, and Pocatello, Idaho, had the highest departure from normal of heat advisories this year.

The most wind damage spotter reports came out of Washington, D.C. area this year, whether thunderstorm-borne or just high winds. The second-most severe thunderstorm warnings were issued in D.C. in 2021, surpassed only by Oklahoma City. No other tornado alley or midwest state came close to those warning counts. While you could argue that higher population breeds more wind damage reports, the departure-from-normal wind damage numbers showed much of the Northeast U.S. far above normal, although some metro areas in the western U.S. were higher. 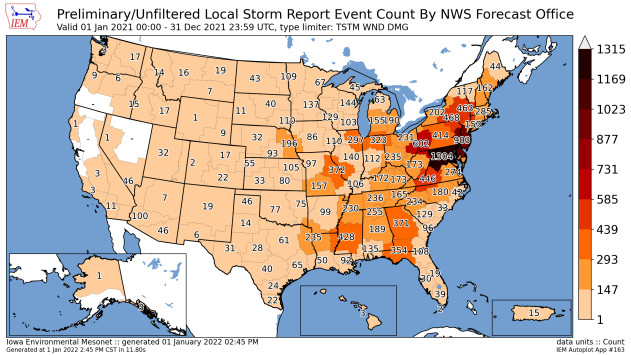 The methodology for counting NWS advisories and spotter reports was to eyeball the IEM Automated Plotter for Jan. 1, 2021 to Dec. 31, 2021 (except for tropical storm / hurricane data which was through Nov. 30, 2021). All maps are downloadable here. I originally calculated Count, Days Of, Rank and Departure From Normal, though during the final check on Dec. 31 for this blog I primarily used Count and Departure From Normal. "Normal" here is the average of the last 35 years (for Severe Thunderstorm & Tornado Warnings) and the last 15-20 years for most numbers, depending on what was in IEM's database. Although Alaska, Hawaii and Puerto Rico are shown in the maps, I did not have time to include them. Puerto Rico and Alaska's data would likely suffer from lack of population, at least for storm spotter reports. If you find any numbers or rankings that are wrong here, please tweet me @WeatherMatrix and I'll put a note here.