Winter storm could unload snow and ice across an extensive area of U.S. next week. Get the forecast.

Following a historic summer across much of Europe, what does autumn have up its sleeves?

The full 2019 AccuWeather Europe autumn forecast will be available on Wednesday, but I wanted to give you a sneak peak ahead of time.

The good news for many is that the extreme heat from the summer has already faded and not expected to make a return during the autumn. 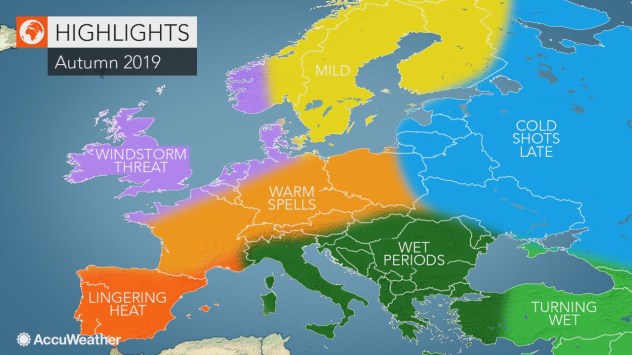 Another big weather story for the upcoming season will be an increased threat for windstorms from the British Islaes into northwest Europe.

The Balkan Peninsula will be at risk for a stormy season with a higher than normal risk for flooding.

Finally, winter is expected to make its presence known before the end of autumn and parts of eastern and central Europe will be the most likely locations to see snowfall.

Check back on Wednesday for the full autumn forecast which will give more details on what different regions can expect in the coming months.

'Drought is going to take a good kick in the pants' Tiny corner of US has been isolated from mainland for months Storm drops fresh blanket of snow across much of Scotland Wisconsin rescuers pull woman and her dog from icy waters Rescuers save pets from flooding caused by Storm Cristoph