Following the brutal, extreme heat across much of California this week, we're also watching a Hurricane Kay that will likely lead to some rain and gusty winds across parts of Southern California from Friday afternoon into Saturday.

It is important to note that Kay will not be a hurricane by the time it gets close to California, but there still will be some gusty winds across Southern California as it moves by to the southwest. The main concern regarding the wind is that areas that see gusty winds but not much rainfall may end up with a high fire threat, especially given the recent scorched vegetation with the recent heat wave.

Is this track unprecedented? Not really - the record rainfall from a tropical cyclone in California is a whopping 14.76 inches, which was recorded on Mount San Gorgonio during Hurricane Kathleen in 1976. Kathleen is really a different animal than Kay looking at the track, as the center of Kathleen tracked right through Southern California (near Palm Springs). This track pushed the core of the moisture from the storm right into the area. 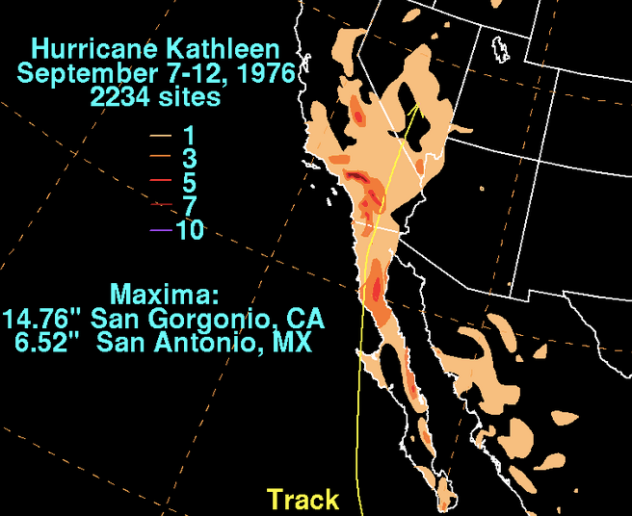 The track and rainfall totals from Hurricane Kathleen in 1976. (NOAA)

This will not be the same situation, as Kay is expected to remain offshore, passing off to the southwest of California. Nevertheless, the track is somewhat similar to other storms that didn't track directly over California, but were close enough to send tropical moisture streaming into Southern California.

I've used precipitable water (a measure of moisture in the atmosphere) in the past to show to gauge the potential for heavier monsoon events in the Southwest, and it's a pretty useful tool here. 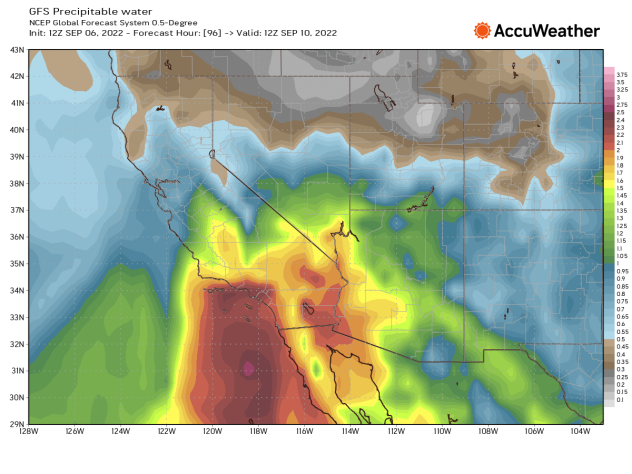 The GFS is showing precipitable water values over 2 inches along the coast from Los Angeles to San Diego into Friday night. Does this guarantee heavy rain? No, because you still need showers and thunderstorms to form to bring moisture to the surface. What this does tell us, though, is that any showers and storms that do form will have the potential to bring tropical downpours and flooding.

The question now is just how much rain will fall and how widespread it will be. The GFS has been showing the potential for more widespread rain across a good chunk of Southern California, while the European shows much of the rain shield collapsing as the storm weakens, which would mean less rain. Either way, it looks like the best chance for heavier rain will be across the Peninsular Ranges, as the topography creates a natural lift that can help thunderstorms develop. This is the same mechanism that ignites storms mainly in the Sierra during the summer months.

So what is leading to this unusual track? The huge ridge in the jet stream, which has fueled the heat, is part of the answer. 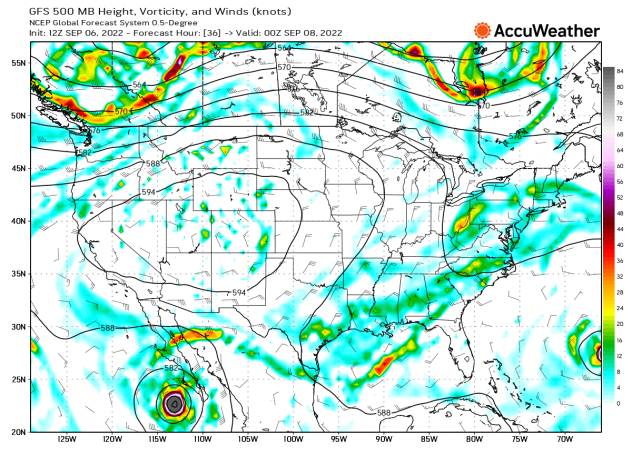 This is the forecast upper-level forecast map for late Wednesday, showing Kay to the south and that big ridge to the north. As the ridge slides eastward, the flow around it helps to pull the storm to the northwest. The incoming trough in the Pacific Northwest will also pass too far to the north to steer it more to the east, so Kay is able to sneak into the void just off to the southwest of California. From there, it will likely slow down and dissipate over the cooler waters into early next week.

While this will not be the extremely elusive landfalling California tropical system (the 1939 Long Beach Tropical Storm remains the only known landfall in California), Kay's track is still unusual and could help produce some unusual weather in Southern California into this weekend.