Drought, hot summer forecast lead to a concerning 2020 wildfire season in the West

The ingredients seem to be coming together for an active wildfire season in the West this year.

After a couple of brutal seasons of wildfires in 2017 and 2018, the year 2019 turned out to be much less destructive year.

Let's take a look at how the acreage burned in the lower 48 states progressed over the past few years.

It was quite the dropoff last year, which was likely due to a few factors. Outside of some initial drought conditions in the Pacific Northwest through much of the summer, there was very little drought across the West last year.

So what will this year bring? The initial conditions certainly raise some cause for concern.

For starters, there is a lot of drought around the West, especially for the Northwest through the Great Basin and into Northern California. This is the Drought Monitor from last week: 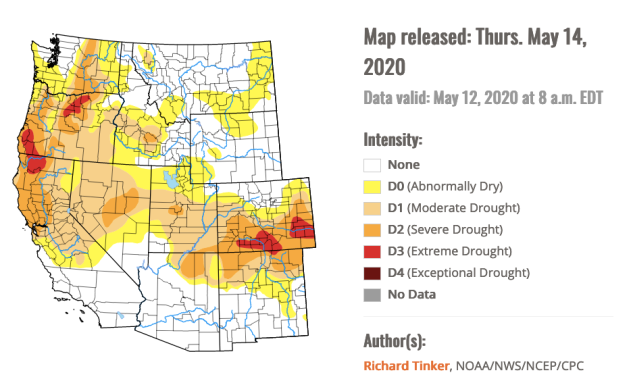 Southern California was on the path to some drought, but the storminess in March and April has helped the situation a bit.

In the Northwest and Northern California, it was a very dry April - not good news given the drought situation in many areas. However, May has been more promising given the recent wetter pattern. Crescent City, California, and Medford, Oregon, both are already close to their average rainfall for the month of May.

The AccuWeather summer forecast indicates that a hot and dry summer is in store for the West, which would mirror 2017 and 2018 more than last year. I want to stress that that does not necessarily mean that this year will be as bad as those two years. There are multitudes of variables that determine how bad a fire season is. 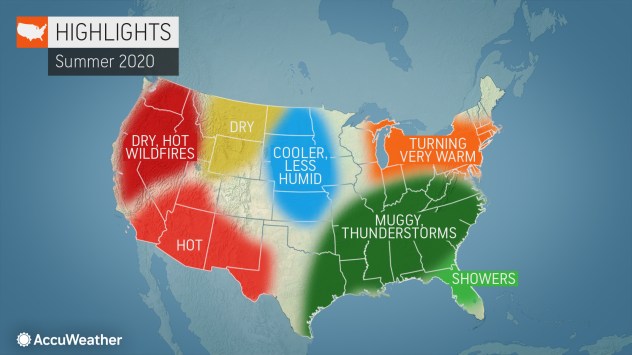 The hot and dry forecast means an increased chance for offshore wind events, which create days of high fire danger.

The area of most concern for wildfires this summer and early fall will be east of the Cascades in Washington, much of Oregon and into Northern California.

Here is the Significant Wildland Fire Potential Outlook by July. If you're interested at all in wildfires and a seasonal outlook for them, check out the PDF that the National Interagency Fire Center puts out at the beginning of each month. They take a deep down look at all of the factors that go into the potential for wildfires. 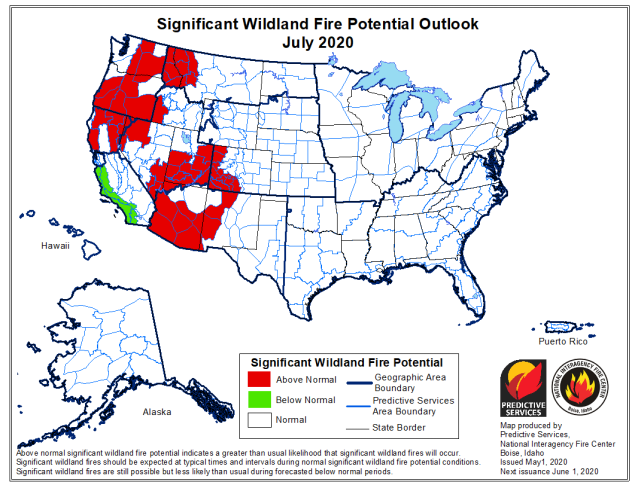 The areas highlighted in the Northwest are the places that are running the biggest rainfall deficits so far this year, which will lead to dry fuel to burn as the dry season progresses. A lot of these areas (at least away from the coast) will be prone to the hot spells we're expecting this summer, which will only enhance the risk.

The Northwest can be tricky, because there can be rounds of rain in the summer that help hold the risk down. That was the case to some degree last year, when rain later in the summer helped keep the threat down.

The red area in the Four Corners is showing the dry area that has cropped up of late. The persistent heat into the summer will dry out the trees and brush in these areas.

In central and Southern California, we expect the biggest wildfire threat to come later in the summer and into the fall, which would fall in line with climatology. However, if the heat early in the summer is persistent and/or extreme, then the fire threat may rise faster during the first half of the summer.

So, to recap, the combination of drought and the forecast for a hot summer raises the risk for wildfires. The highest risk areas are in the Northwest and across Northern California.

We'll keep you updated on the wildfire threat all season long on AccuWeather.com and here on the Western Blog, so keep checking back for updates!