How George Washington and the weather saved the Revolution

The Declaration of Independence was signed in the warmth of a Philadelphia summer in 1776. However, as 1776 came to a close, it appeared the Revolution might be doomed. George Washington and his forces had suffered a string of losses, and with each loss, there was less and less public support. After all, if the Revolution was lost and the British won, all who participated or aided in the revolt could be tried and convicted of treason against the Crown.

And so, when Washington and his depleted forces dared to cross the icy Delaware River on Christmas night... then deliberately attacked Trenton from the north with the winds at their backs... sleepy-eyed Hessian defenders waking up on the morning after Christmas were greeted by wind-launched darts and tacks of stinging sleet in their faces and a hail of bullets from the Americans who could hardly be seen through the storm. This map was drawn after piecing together reports of weather observations at the time and establishing a scenario that is consistent with those reports: 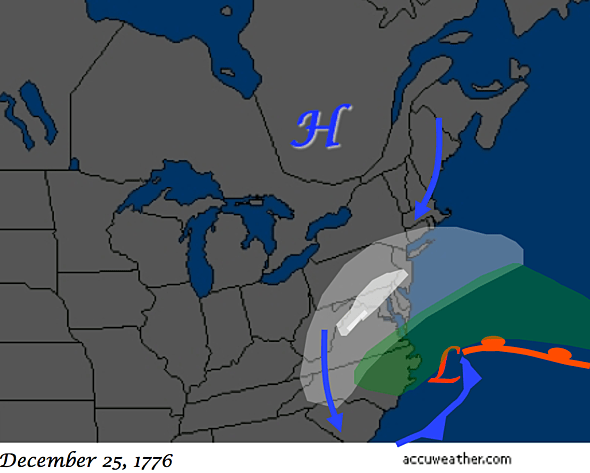 This is the bridge that links New Jersey and Pennsylvania at Washington's Crossing: 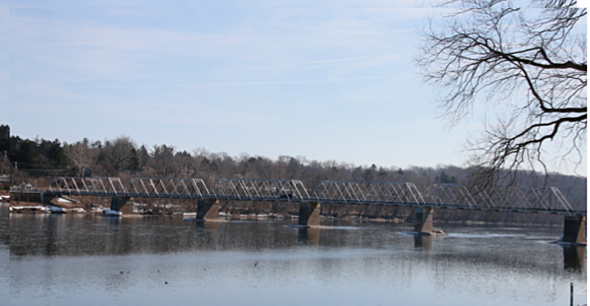 South of Washington's Crossing near Trenton we find "Amtrak's Crossing." This picture was taken in January 2014 during a cold snap that produced extensive river ice on the Delaware. If there had been this much ice in the river on Dec. 25, 1776, it would have prevented Washington's forces from crossing: 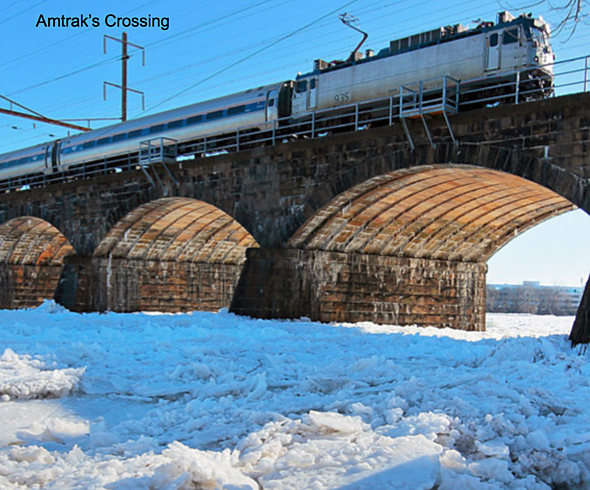 The stunning victory at Trenton proved to be the turnaround event that fueled the rebel fire once again. However, that was far from obvious to George Washington as he and his forces recrossed the river and regrouped. The army was about to dwindle away. Enlistments were up at the stroke of midnight, New Year's Eve. Desperate, and without official authorization, Washington called on the soldiers to stay, offering them a bonus if they extended their enlistments. The soldiers did not respond at first, but then one stepped forward, then another... and then another.

They hatched a plan to attack the British once again. Meanwhile, the snow on the ground melted. The rebels crossed the Delaware again on New Year's Day. This time the British were ready, and the rebels were forced into a corner. They were stranded in muddy fields, back to the river... with no way to escape. One bold attack by the British would wipe out the American forces and end the war.

However, George Washington was a Virginia farmer, and farmers watched the weather. He had experienced winter days with blue skies and northwest winds. He had seen the temperature hold steady during the those days, then sink below freezing at night. He had a thermometer and at noon it was 39 degrees and holding. A stiff northwest had erased the 50-degree weather of the previous day. Washington ordered the troops to prepare huge bonfires after sundown and make the appearance of bustling around in the camp.

Behind the fire glow, it was dark. We in the age of light pollution are not used to the kind of dark faced every moonless night back in the 1700s. But in the darkness, Washington's troops readied their equipment, even wrapping wagon wheels in cloth to minimize the noise. The ground froze. The forces moved out, picking their way northward... away from the encamped British who were lying in wait to mount their own attack at first light.

This is the Clark House at the Princeton Battlefield: 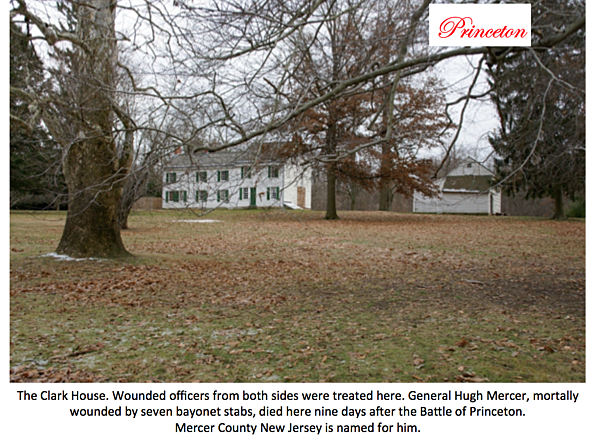 Dawn broke to the sight of rebel soldiers marching toward Princeton through fields laced with frost. The Battle of Princeton was fierce but lasted less than an hour. One casualty was General Hugh Mercer. Mercer County, New Jersey, is named for the fallen patriot. The British were defeated again and pulled back to their garrisons farther northeast in New Jersey. News of the rebel victories spread like wildfire back in Europe weeks later. Soon the French would be emboldened to declare war on Britain and help the American cause. George Washington and his weary forces set up camp in Morristown, New Jersey, with hills to offer cover and yet close enough to their enemy to spy on their activities.

If George Washington had not been up on his weather knowledge and had not realized it would freeze at night as he did, his forces would have been surrounded and captured the next day. The hard-fought gains at Trenton would be meaningless.

A vast and empty field marks the place where the Battle of Princeton was fought 239 years before this coming January. As I stood there in an icy wind a few Decembers ago, storm clouds were increasing. It was a raw and unforgiving wind, a wind soon to be armed with sleet and freezing rain.

Aside from the wind in the trees, it was silent in that field. Darkness was moving in. I closed my eyes for a moment, and could almost imagine the footsteps of some of our first war veterans rustling through the fallen frosted leaves so long ago. And I said a silent thank you. If they hadn't done what they did when they had to, we couldn't do what we want to in freedom... today.

ABOUT THIS BLOG
Northeast US weather
Elliot Abrams
Leading forecaster and meteorologist Elliot Abrams provides regular updates and analysis on on Northeast weather.