The dazzling swarm of jellyfish danced around the boat in crystal blue waters just offshore a busy Mediterranean beach destination — a spectacle that a Parks and Nature ranger said could become more common.

A recent drone video captured thousands of glimmering white jellyfish surrounding a single boat offshore Israel’s Haifa Bay, with the bloblike creatures dancing just below the water as far as the eye can see.

The mesmerizing video, taken over the Mediterranean waters offshore northern Israel and released by Israel's Nature and Parks Authority, shows a lone boat resting in stunning aquamarine water. As a drone continues to rise above the isolated vessel, it becomes clear that it is not just a few jellyfish surrounding the boat -- it's a massive bloom.

The Nature and Parks Authority said human activity has contributed to the multiplication of jellyfish, according to Storyful. Climate change is a major factor driving the increase in jellyfish populations in the Mediterranean and around the world, as jellyfish thrive in warmer waters. 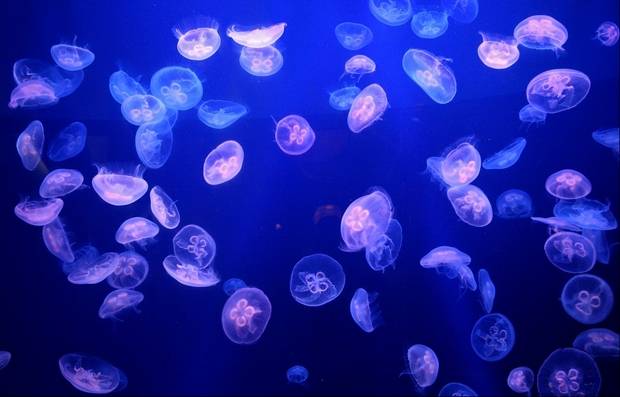 Moon jellyfish are seen in an aquarium of the Oceanographic Museum of Monaco. (AP Photo/Lionel Cironneau, File)

"The water gets hotter and hotter and we can see more and more jellyfish," Guy Lavian, a marine ranger with the Israel Nature and Parks Authority, told Reuters. "They cause real damage here. You can definitely say that global warming contributes to these massive swarms."

While the jellyfish make for beautiful overhead shots, their presence has stung Israel's tourist industry. Roughly $10 million a year has been lost due to the jellyfish invasion, with people opting to avoid activities that could put them in the harm's way of the ancient, stinging creatures, according to Reuters.

The gelatinous beings have also made their way into the country's desalination plants, industrial fishing nets and the machinery that uses seawater to cool power generating stations.

Many of the jellyfish are non-native invasive species that have made their way through the Suez Canal into the Mediterranean Sea. Today, 17 unique jellyfish species populate the area, according to Reuters.