The National Weather Service issued a 'red flag warning' amid conditions that could stoke the blazes in some areas.

As hard as it may be to believe, the 2020 wildfire season hasn't even reached its peak yet.

If ever there were a year for the western portion of the United States not to burn down in record proportions, 2020 would certainly have been that year. Alas, Mother Nature doesn’t adjust her timelines for diseases or disasters, even pandemics.

So as the calendar closes in on the final quarter of months for what has been a record-shattering wildfire year, Westerners are left hoping that the final few months prove less destructive than the previous few. However, recent history suggests the worst could still lie ahead, particularly in California, and the total economic impact of the fires this year could cost between $130 billion and $150 billion.

Although California typically gets the most wildfire activity of any state, northwestern neighbors in Washington and Oregon, along with states farther east such as Nevada and Colorado, have also experienced fire seasons for the history books this year. On top of the record-breaking burnt acreage, blazes have burned in populated areas, sending millions scurrying and prompting emergency evacuations. 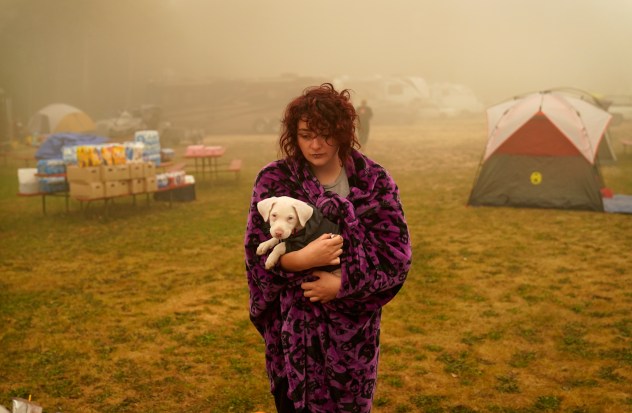 Shayanne Summers holds her dog Toph while wrapped in a blanket after several days of staying in a tent at an evacuation center at the Milwaukie-Portland Elks Lodge, Sunday, Sept. 13, 2020, in Oak Grove, Ore. "It's nice enough here you could almost think of this as camping and forget everything else, almost," said Summers about staying at the center after evacuating from near Molalla, Oregon which was threatened by the Riverside Fire. (AP Photo/John Locher)

“It’s not always the biggest fires that cause the biggest problems and impacts on people,” AccuWeather Senior Meteorologist Ken Clark said. “Where a fire develops in relationship to populated areas is critical.”

After such a taxing wildfire summer, could the worst possibly be yet to come? Or will Mother Nature finally lend a relieving hand?

With over 6,000 homes and structures destroyed, dozens of deaths, nearly 5 million acres burnt and many millions of dry acres at risk, the totality of financial impacts dealt by wildfires in 2020 is likely to surpass the ranges expected for a typical wildfire season and veer into another eye-popping category, that of a major hurricane.

The estimated damage total and cumulative economic loss is expected to be between $130 billion and $150 billion, according to AccuWeather Founder and CEO Dr. Joel N. Myers.

“Our estimate of the economic damage caused by the wildfires alone is the equivalent of what we might see for a Category 4 or 5 hurricane,” Myers said. “We factor into our estimate damage to homes and business as well as their contents and cars, jobs and wage losses, agricultural losses, infrastructure damage, damage to businesses and their buildings and contents, and the costs of power outages to businesses and residents.” 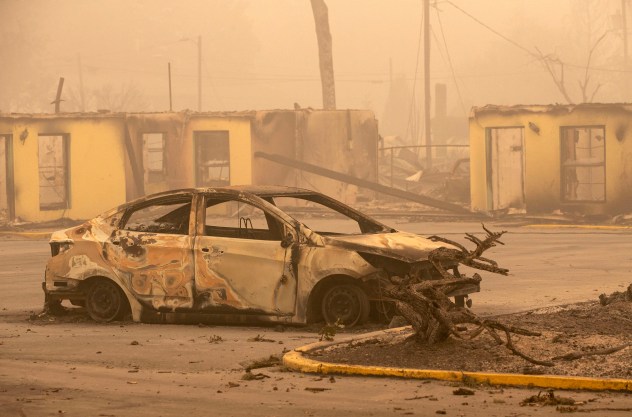 The Oak Park Motel was destroyed by the flames of the Beachie Creek Fire east of Salem, Ore., Sunday, Sept. 13, 2020. (Rob Schumacher/Statesman-Journal via AP, Pool)

According to the National Interagency Fire Center, over $1.9 billion worth of fire suppression efforts have already been spent nationwide thus far in 2020, as of Sept. 14.

“There has already been tremendous and record-breaking damage, yet in normal years, the bulk of the damage from fires accrues in September and October and lasts into November and sometimes into December,” Myers said. “And yet this is already the worst fire season in history.”

Much of AccuWeather's estimate for total economic impact takes into account not only the acres burned up until Sept. 14, but also the fires that meteorologists expect could burn in the coming weeks and months due to weather conditions over that time period. More on that below.

How did we get here?

Numerous ingredients had to be mixed to lay the dangerous groundwork for the disastrous recipe that has unfolded in the West this year. Perhaps most notably was the lack of rain.

Between mid-June and the end of September, the Southwest typically benefits from what is known as the North American monsoon season, delivering much-needed rainfall, which usually brings a cumulative average of one-quarter to one-half of the annual rainfall the region receives in a single year, according to AccuWeather Senior Meteorologist Alex Sosnowski.

This year, that precipitation was replaced with drought. Along with ample fire fuel sources and high temperatures, experts say those turned an already volatile area into a disaster waiting to happen. 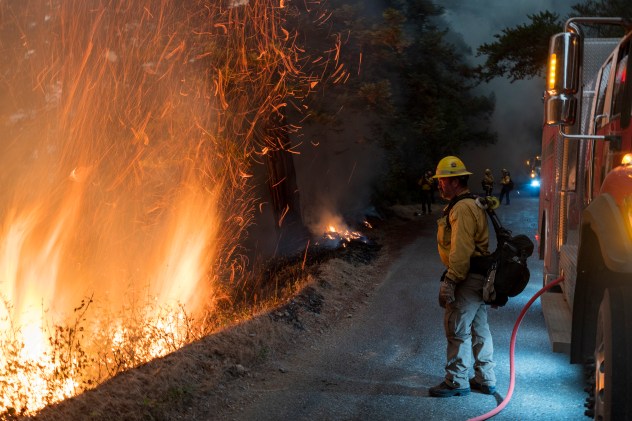 “One of the driest monsoon seasons in a long time and maybe on record, a surge in the growing season late last winter sparking growth of volatile, highly combustible fuels like sage brush and much-hotter-than-normal weather,” Clark said, listing the destructive elements.

AccuWeather Long-Range Meteorologist Paul Pastelok added that drought conditions had developed before the monsoon season, or lack thereof, even arrived. Pastelok pointed to early-summer, upper-level high pressure in the Southwest that prevented moisture from pushing into the region, along with a misdirection of that moisture. He also attributed the uptick in fire activity to a strengthening of La Niña, a phenomenon in which the ocean near the equator of the Pacific Ocean is cooler than normal, which in recent weeks has suppressed tropical development over the east Pacific that could've delivered precipitation to the areas being hit by fires.

All those factors laid a powder keg-like situation in the region. The spark? Summer lightning.

“A contributing factor to the major fires in Northern California from August was the unusual cluster of thunderstorms that moved through the area on Aug. 16 -- the ones that triggered severe thunderstorm warnings in San Francisco,” AccuWeather Senior Meteorologist Brian Thompson said. “The lightning from these storms triggered dozens of fires, including the cluster that is now referred to as the August Complex, which is now the largest fire in California history.”

Thompson added while thunderstorms aren’t uncommon in Central California area during the summer months, the amount of lightning combined with the unbreakable heat wave to form a deadly pairing. 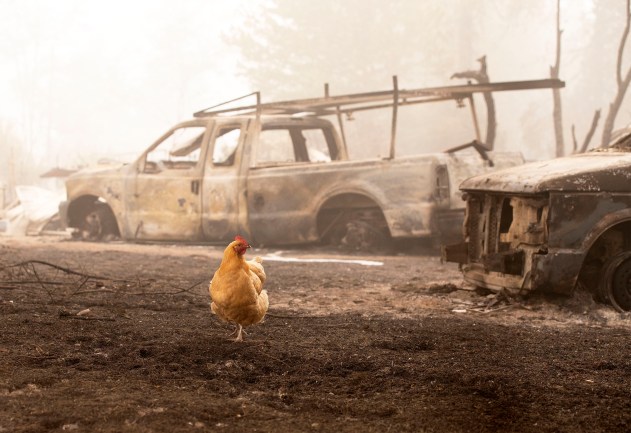 Other factors continued igniting blazes throughout the region, including numerous human-caused fires, such as the El Dorado Fire, which was started by the improper use of a pyrotechnic device at a gender-reveal party.

Winds to complicate it all

Like water on a grease fire, this autumn’s wind events have the potential to spurn all firefighting efforts for naught. Each year, the Santa Ana winds and the Diablo winds gust through the Southwest and rile up wildfires. This year, that could mean even more headaches for overworked firefighting crews.

“Most of the Santa Ana winds start in mid- to late September and last into the winter,” Clark said. “The worst of fire season typically occurs before the onset of rain, of course, so this means we generally have from now through most of October, and in Southern California, southern Nevada and Arizona, into part of November to go.”

Not only do the winds spread the wildfires in unpredictable ways, but they also nullify many firefighting efforts from air crews that can’t make drops as effectively. 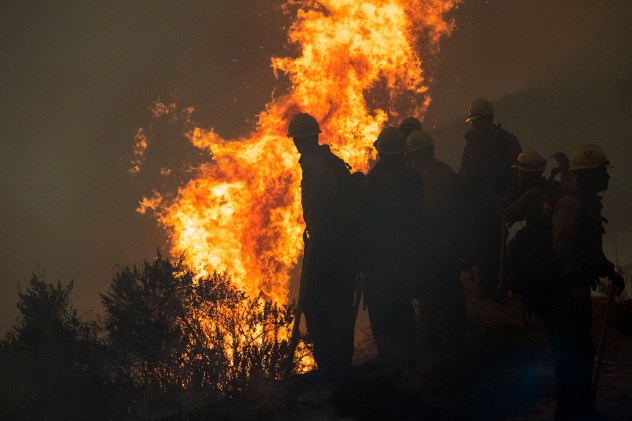 “These winds cause rapid to explosive fire growth of any fire, which crews cannot keep up with,” Clark said. “Critical airdrops of water and Phos-Chek many times cannot be done during these wind events as it is too dangerous for the aircrews to fly.”

Pastelok added that the long-range team of forecasting experts expects those winds to last later into the fall than usual.

“Our forecast was for increasing wind events in late September into October but lasting longer into November,” he said.

A recent windstorm in California has already exacerbated fire dangers, and as Thompson pointed out, the early-season fire growth came at a disastrous time for many residents who were caught off guard.

“The most recent windstorms that impacted much of the West was another unusual event in that it happened so early in the season,” he said. “Windstorms like this are usually found later in the fall and winter, not early September. This, combined with the extreme drought that has been ongoing for months in Oregon and Northern California, is what fueled the fires up there. The wind happening on a holiday, Labor Day, was also bad timing, as you have more people out in the woods, potentially providing an innocent spark, which can quickly become an out-of-control fire with the wind.”

Will helpful precipitation or cooler air arrive in time?

Historical averages suggest that any beneficial rainfall bailing out firefighters cannot be expected for another couple of months.

“Precipitation typically arrives from north to south, not reaching the south in any beneficial way until very late October or November,” Clark said. “This can vary quite a bit from year to year,” he added. 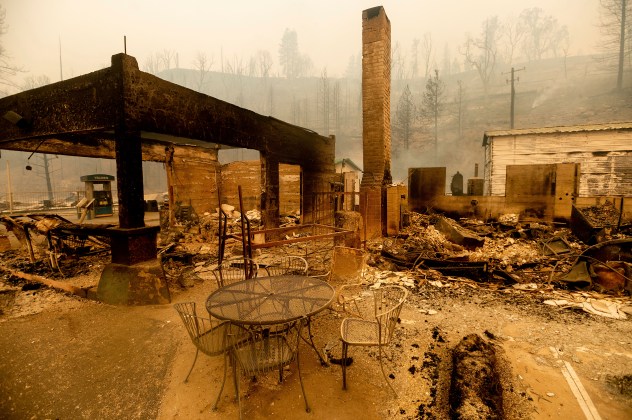 In this Sept. 8, 2020, file photo, a table stands outside the destroyed Cressman's General Store after the Creek Fire burned through Fresno County, Calif. Experts agree that more extreme fire behavior is driven by drought and worsening conditions that they attribute to climate change. Among the most concerning developments is that wildfires can spread far more quickly, leaving less time for warnings or evacuations. (AP Photo/Noah Berger, File)

Among other factors, those shifting precipitation conditions suggest that the wildfire seasons in Washington and Oregon are more likely to ease earlier than in California, particularly in the central and southern portions of the Golden State.

“We lean toward the Northwest fire season ending quickly, especially any area from eastern Oregon to Montana,” Pastelok said.

Beyond that hope, the coming months present an uncertainty that means millions more acres and millions more residents are at risk. Pastelok lamented that short-term relief may be a dream at best.

“Farther south is a tougher call and may take a lot of time.”